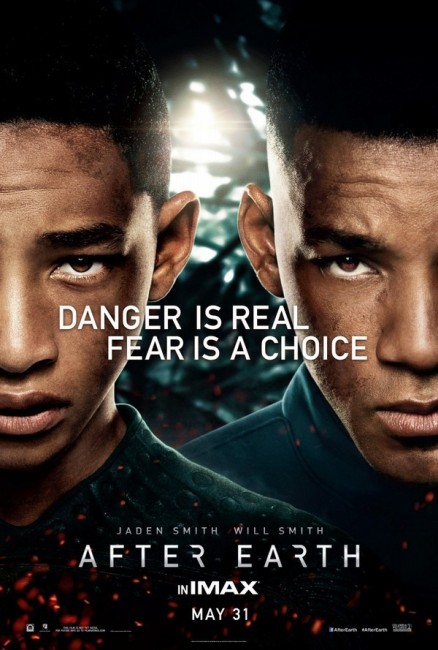 A thousand years ago, humanity was forced to evacuate Earth following environmental disaster and has resettled on the planet Nova Prime. The native alien race has objected to their presence by unleashing a series of monstrous creatures known as the Ursa. The Ranger Corps has emerged as humanity’s protector and have learned the skill of ‘ghosting’ – of suppressing the instinct for fear that the Ursa use to track victims so as to hide from them. The most renowned of the Rangers is Cypher Raige who has been completely successful at suppressing all fear. His son Kitai aspires to follow his father but is turned down from graduation at Ranger school despite excellent grades because he is not considered ready. As Cypher returns home and Kitai brings news of this disappointment, Cypher’s wife Faia suggests he take Kitai with him on his next mission. They depart, only for the ship to hit a debris field, forcing them to make an emergency landing on the nearest planet. Cypher realises that this is Earth, which has been quarantined as dangerous. The ship crashes and the only survivors are Kitai and Cypher. With Cypher injured, Kitai must make a hundred kilometre journey to where the tail section of the ship has landed in order to activate the emergency beacon. As he sets out, this proves to be a journey where Kitai must deal with the dangerously evolved animal life of Earth and will test his Ranger training to its limit.

M. Night Shyamalan is a very divided creative talent within genre cinema. Shyamalan emerged out of nowhere with the sleeper hit of his third film The Sixth Sense (1999), which became a worldwide sensation due its left field twist ending (one that was soon copied by dozens of films). This boosted Shyamalan into the ranks of major director. A great deal of buzz centred around his next films – Unbreakable (2000) and Signs (2002). This was heightened by the studio promotional campaigns that turned the Shyamalan twist ending and even what the films themselves were about into a big mystery expectation. Alas, by the time that we arrived at the shaggy dog twist of The Village (2004), audiences were starting to consider the Shyamalan surprise ending a big letdown. By the time of his next two films, Lady in the Water (2006) and The Happening (2008), neither of which it should be noted were based around twist endings, audiences were turning off Shyamalan in a big way and regarding him as big-headed and full of woolly-headed mysticism. The Night Chronicles 1: Devil (2010) was a brief blip that received okay reviews, largely because Shyamalan was only a producer, but the Shyamalan turnoff otherwise reached its nadir with the universally detested The Last Airbender (2010), which was ridiculed to high heaven and regarded as one of the worst films of its year. None of this seems to have substantially improved by the time of After Earth, which was greeted with indifferent to fairly scathing reviews and weak box-office.

All of that said, I remain somewhat more appreciative of M. Night Shyamalan’s films than the general public. I enjoyed the mostly dismissed Lady in the Water and seem to be about the only critic in the world who had good things to say about The Last Airbender. What you cannot deny is that Shyamalan is a fairly reasonable director – in efforts like The Sixth Sense and The Village, he manages to pull off some intensely atmospheric and spooky scenes. As a writer, Shyamalan’s preoccupations with matters of predestination and the meaning of it all get undeniably woolly-headed but it is also undeniably fascinating to watch him play with ideas and try concepts out. He is one of the few writers out there in the fantastic genre who is creating original material rather than recycling other works and he seems willing to look at big questions about existence and the meaning of it all, which is something that you could search the collective works of Michael Bay, Stephen Sommers, Paul W.S. Anderson and a dozen other genre directors for in vain.

In both The Last Airbender and After Earth, Shyamalan creates entire worlds, filled not just with distinctive design schemes but background texture, argot and ways of thinking rather than most science-fiction/fantasy works that simply place contemporary attitudes and characters into slightly unusual settings. Works like The Village and Lady in the Water create fascinating original mythologies to go with their scenarios.

One suspects that the anti-Shyamalan buzz is simply the fact that he is working on big budget films. If he were operating as a medium or low-budget director/writer and turning out works that didn’t have such high expectation heaped on them – ie. requiring audiences to shell out $12-15 a ticket to watch – he would probably have become a cult name. Indeed, you suspect more than anything that the negative word of mouth for The Last Airbender was simply audiences reacting against its shitty post-production conversion to 3D, which was quickly conducted in a bid to take advantage of the new fad – seen flat, it is a different film altogether.

After Earth came heavily backed by its star Will Smith where M. Night Shyamalan gives all appearance of being less an original creative force than a hired gun. Will Smith produced the film through his Overstreet Productions company banner, while the producers consist of Smith’s long-time business partner James Lassiter, his wife Jada Pinkett and her brother Caleeb Pinkett. Moreover, the film stars Smith and his fourteen year-old son Jaden. Jaden has been trying to maintain a career as an actor ever since appearing opposite Will in The Pursuit of Happyness (2006) where they also played father and son. He subsequently appeared in The Day the Earth Stood Still (2008) and most notably took on the lead in the remake of The Karate Kid (2010). Aside from that, he has also started to follow his father’s footsteps as a rapper and has released several singles, while also starting his own clothing line. Certainly, going by Jaden Smith’s (lack of) performances to date, the only reason he has obtained such roles is purely down to nepotism. I would like to see someone who exudes so little in the way of basic acting skill try to get as far as he has without having the name and connections of a big superstar daddy to draw on. Smith had originally intended After Earth as a multimedia franchise that would extend to sequels, tv series, an animated series and a videogame but all of these disappeared with dismal box-office performance.

After Earth seemed to accrue a good deal of negative critical buzz upon opening where it was interpreted as being a pro-Scientology film. A number of reviews dismissed it as Will Smith’s equivalent of John Travolta’s Battlefield Earth: A Saga of the Year 3000 (2000). There are a few problems with this. The first of these is that there is no clear proof that Will Smith is an adherent of Scientology. He has donated money to some Scientology centres and spoken out to defend his good friend Tom Cruise, even stated that Scientology has some good ideas to it. However, he has never come out as associating with the cause in any direct way – in fact, his only actual words on the matter have been to explicitly deny that he is a member. Certainly, his other actions do sit on a line of ambiguity but it is a stretch from that to come out and label Smith as a Scientologist.

That has not stopped a number of critics from making specious claims about After Earth being a pro-Scientology film where such aspects as Smith’s guiding Jaden from a spaceship control centre is compared to an auditing session; where the film’s theme about seeking perfect control of one’s fear is seen as espousing a central Scientology tenet; even the ridiculous connection made between the exploding volcano in the background at the climax and the image on the cover of L. Ron Hubbard’s Dianetics (1950). All I can say is well maybe. Only Smith really knows what he believes – I didn’t see any particular Scientology recruiting commercial while watching After Earth and never made the associations until I read other comments afterwards.

The issue of control of one’s fear is certainly an interesting idea that makes for a unique plot element. Rather than Scientology, it feels more like Shyamalan and co-writer Gary Whitta – who also wrote The Book of Eli (2010), a film it should be noted came with a Christian (as opposed to Scientologist) agenda, and went on to script Rogue One (2016) – having inhaled too much in the way of Tony Robbins, Werner Erhard and various other self-improvement gurus. Indeed, this fascination with being able to become a mental superman through controlling states of mind is something that goes way back to the science-fiction of the 1940s and writers like John Campbell, A.E. Van Vogt and yes the pulp output of L. Ron Hubbard. For that matter, it is something that is an essential tenet of fairly much any martial arts training movie. The idea of the Rangers could easily have been borrowed from tv’s where they were seen as akin to monks who had attained superhuman abilities through the exercise of self-control, while you could also point to the Jedi training sequences in the various Star Wars films and in particular the gom jabbar test in the opening scene of Frank Herbert’s Dune (1965) – see Dune (1984) and Dune (2000).

Without reading any particularly deeper religious propaganda into it, I enjoyed After Earth. It shares very similar territory to Will Smith’s good buddy Tom Cruise’s Oblivion (2013) from a couple of months earlier – both are films about the last two people left on a deserted future Earth. (When you think about it, Oblivion with its left field twist ending is far more of a M. Night Shyamalan-esque film than After Earth, which is more of a straightforward planetary adventure). M. Night Shyamalan directs a satisfyingly solid show. The universe he creates is a uniquely original one – one that reaches from the production design and technology to the language and ways of thinking employed by the characters – and does what good science-fiction should in transporting an audience to a different place. The dialogue is taut and distinctive in a way that immediately suggests a familiar but very different world.

Say what you like about M. Night Shyamalan but I will defend him and happily say he doesn’t make a wrong step in any of After Earth. The major complaint you have with the film is its father and son acting team. Jaden Smith is simply a non-actor. He plays the entire part with a dopey indifference like the non-achiever kid who sullenly sits at the back of the class, making zero effort and greeting every attempt to ask him a question with a blankness. He gives all the impression of being shoehorned into the part by his father and passes through the show frequently giving the impression that he resents being there.

By contrast, Will Smith is a seasoned pro and comes across with an effortless charisma in all of his screen performances. He has reigned that in here and gives a performance that seems tightly bound by military discipline. Moreover, it is a performance where the scripting choice places Will in the backseat and has him confined to a control room for the bulk of the film while Jaden handles the more physical scenes, where in fact it surely makes far better box-office sense that it should be Will out there in the midst of the action.

(Nominee for Best Production Design at this site’s Best of 2013 Awards).