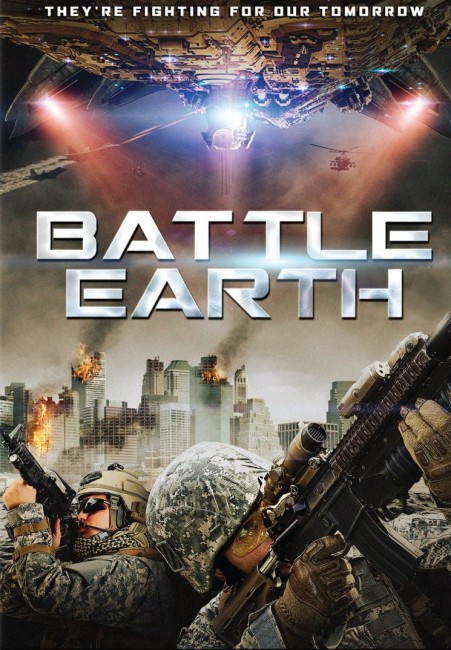 Greg Baker is working as an ambulance service paramedic when an alien invasion strikes. Six months later, Greg has signed on as a medic with the Canadian Armed Forces. He and several regular soldiers are on a mission to accompany two Special Forces operatives who are transporting a highly important container of biological materials. Their helicopter is then shot down behind enemy lines. Recovering, the troop holds out against the aliens, while trying to contact homebase and obtain support to be airlifted out. As they wait, the group become aware that what is in the box is something that could alter the course of the war.

Battle Earth – shot under the title The Medic but renamed for dvd release – is a Canadian-made independent film. It is a third film for Aaron Kurmey who had previously made High School Brawl (2010) and Hoodoo Voodoo (2010). The financing for the film was raised via the crowd-funding site Indiegogo. Kurmey subsequently went on to make another non-genre war film with Thousand Yard Stare (2018).

The retitling Battle Earth gives clear indication of the probable source of inspiration – the then recent hit of Battle of Los Angeles (2011), which told the story of an alien invasion from a shakycam-shot infantryman’s point-of-view. In this regard, Battle Earth has a much more ambitious idea – that of taking a gritty war film approach to an alien invasion but with the story focused around soldiers caught behind enemy lines. The behind enemy lines story has a long history in the regular war film but the idea of soldiers trying to survive in a war zone amidst aliens whose ways are utterly foreign to them is one that holds fascinating potential.

This is clearly a war film shot on a low-budget – the CGI helicopters are on the dodgy side; there are some passable-looking aliens but very little is dwelt on either. The major problem with Battle Earth is that it sets up an interesting scenario – soldiers trapped behind alien enemy lines, the struggle for a mysterious McGuffin in a box that could alter the course of the war and/or manipulate people’s minds (the story is rather fuzzy about what the brain actually does) – only to do nothing with it and let the film peter out without any real resolution. It may be that the filmmakers lacked the resources to do anything more or that they had run out of ideas, but you can be guaranteed that a Hollywood production would have arrived at a far more satisfactory wrap-up of the story.

The other problem is that as soon as it gets the soldiers into the wilderness (within the first ten minutes), the story slows right down and nothing much happens. The film has a certain verisimilitude – there is a good deal of casual chatter between the men, which includes the odd very strange line – “Don’t shit on my chest and call it a tuxedo” – and a whole lot more with them urgently calling out military code phrases into the radio trying to report their position. Alas for the film, not much of this ever coalesces into a dramatic story.