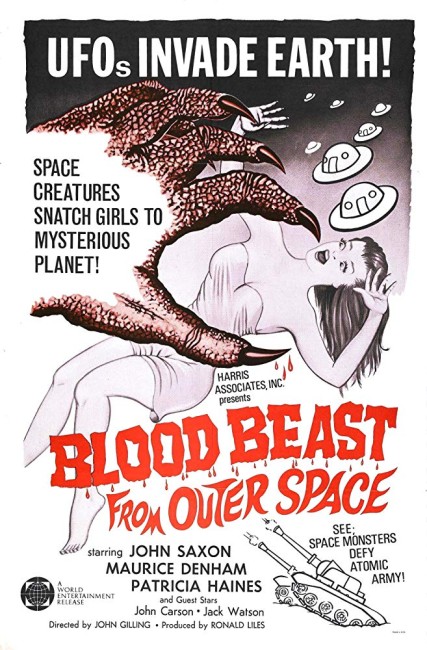 At the Falsey Park radio astronomy facility, scientist Dr Morley and his American associate Jack Costain detect an object heading towards Earth. They head to the area where it has landed and persuade the military to let them help. Finding a small sphere, they take it back to the laboratory. While working at night, secretary Ann Barlow believes she sees something moving, while there are reports of a creature on the base. Morley is then killed while trying to communicate with the creature after which it makes an escape. A few weeks later, Costain is in London trying to track the creature, which they believe comes from Ganymede. More than twenty girls have been reported missing. Costain and police search for a common cause link, finding that all the girls have answered a modelling ad placed in ‘Bikini World’ magazine. From this, they realise that the alien known as Medra is luring women via the ads and then abducting them to repopulate its own world.

The Night Caller was one of the films from British director John Gilling. Gilling was one of the directors working during the Anglo-horror cycle of the 1960s and 70s and is mostly remembered for two Hammer films, The Plague of the Zombies (1966) and The Reptile (1966). (See below for John Gilling’s other films). Most of the directors in the British horror film diverted to make one or two science-fiction films during the 1960s – Terence Fisher made The Earth Dies Screaming (1964), Island of Terror (1966) and Night of the Big Heat (1967), while Freddie Francis made They Came from Beyond Space (1967) and Roy Ward Baker Moon Zero Two (1969) – and Gilling follows suit here.

The Night Caller starts well. The scenes with no-nonsense scientist Maurice Denham and imported American name actor John Saxon as his assistant recall the Quatermass films – The Quatermass Xperiment/The Creeping Unknown (1955) being the work that kicked off the British science-fiction film. In particular, the scenes with them joining the military to investigate a mysterious alien object on the moors recalls X the Unknown (1956), one of the better Quatermass copies. The first half of the film generates the same kind of stark tension common to many of the better British science-fiction films.

Gilling shoots with sharp contrasts between fore– and background – the room containing the sphere ominously glowing while Patricia Haines innocently types in the foreground; a claw appearing around the door; the point-of-view shot from Maurice Denham who has fallen and dropped his glasses as an indistinct humanoid shape appears in front of him.

Unfortunately, there is the second half of the film where you cannot help but collapse into laughter at the basic concept the film hoists on us. At heart, what we have is no more than a cheesy US film about aliens coming to Earth to steal our women as per something like Mars Needs Women (1966). Certainly, you have to commend John Gilling as he tackles the exercise with a straightfaced approach that defies you to regard the film with anything other than complete seriousness. However, as a serious alien invasion scheme, the plot dissolves into absurdity – one whereby the alien comes to Earth and recruits women by placing ads for models in nudie magazines and then turns up at the model’s homes to deliver a 3D photo from which (its’ m.o. is not exactly clear) it seems to emerge to teleport them back to Ganymede.

We have what feels like two different films thrown together – the first half a Quatermass wannabe, while the second resembles less an alien invasion film that it does a psycho film about a killer stalking women via modelling ads. Even the film’s original title The Night Caller suggests more of a psycho-thriller than it does an alien invasion film – all the various retitlings have appended ‘… from Outer Space’ to make it more apparent that it is a science-fiction film. At least, Gilling’s stone-faced seriousness of approach makes these scenes transpire in a way that defies you give in to ridicule. The cast also includes a fascinating performance from Aubrey Morris who gives what is clearly the role of a gay bookstore owner a giggly perverse glee.