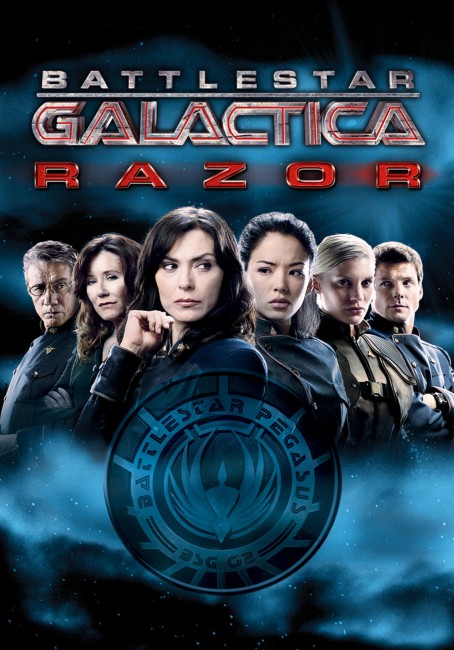 After the overthrow of Admiral Cain, Lee Adama assumes command of the Battlestar Pegasus. In order to bring together Cain’s crew, Lee appoints one of her former officers Lieutenant Kendra Shaw as his Executive Officer. Kendra remembers back ten months earlier when she first came about the Pegasus at the Scorpion Shipyards, just as the Cylons attacked the Colonies. They survived after Cain ordered them to randomly jump away from the shipyards. Cain then decided that they must take the path of conducting brutal reprisals against the Cylons. However, during their first raid, their defences were sabotaged. Kendra made the discovery that Cain’s lover, engineer Gina Inviere, was a Cylon agent. Their need for survival drove Cain to increasingly ruthless actions, including forcibly commandeering parts and personnel from a group of surviving civilian ships and abandoning the ships defenceless. In the present, an old model Cylon ship is discovered during a raid. The Galactica and Pegasus crew realise that primitive Cylons are operating in the area and have been experimenting on captured humans in an attempt to evolve to a higher form.

The original Battlestar Galactica (1978-9) tv series was always designed as a quick rip-off of Star Wars (1977). Though Battlestar Galactica has a classic reputation in the annals of television, it is poor science-fiction – featuring bad science and ill-written plots that were barely more than transplanted Westerns with a few robots and planetary locations. A revival was planned throughout the 1990s and finally emerged as the mini-series Battlestar Galactica (2003).

The surprise about Battlestar Galactica 2003 was how it abandoned strict adherence to the original and reconceived the basics, in doing so turning it into a tough, hard-edged survival story with characters of fascinatingly complex depths. Battlestar Galactica went to series in 2004 and gained a big cult following. Over its subsequent five-year run, the series built the basics out into an exceptional ongoing saga that dealt with the political, military and personal decisions that the survival run forced onto the survivors. There is probably nobody but the most extreme die-hard fans that would be prepared that the new Battlestar Galactica was infinitely superior to the original in all ways.

One of the best storylines of the new Battlestar Galactica was the three-episode arc that consisted of Pegasus and Resurrection Ship Pts 1-2, dealing with Admiral Cain as played by Michelle Forbes. Cain and the Battlestar Pegasus had been introduced in the original Battlestar Galactica two-part episode The Living Legend, which was also repackaged as the cinematic feature Mission Galactica: The Cylon Attack (1979). There Cain, played by Lloyd Bridges, was the commander of one other surviving battlestar who ended up endangering the stability of a combined mission with his reckless desire to go out in a blaze of glory. The Admiral/Commander Cain story received a radical reworking on the new Galactica. Aside from Cain now being a woman, she was depicted as a commander who had engaged in ruthless actions in order to continue her fight against the Cylons, including shooting dissenters and pillaging and then abandoning civilian craft for their supplies. The situation ended with the two battlestars at war and both commanding officers preparing to assassinate the other.

The Admiral Cain story arc was such a popular one with fans that she was revived for this special. Battlestar Galactica: Razor emerged between the third and fourth seasons of the series and was designed by series creator Ronald W. Moore as a standalone story that could be sold as a dvd-release rather than part of the on-air package. Battlestar Galactica: Razor was even given a cinematic release in some parts of the US, although was also seen as a two-parter on the syndicated series.

By the point that Razor was made, the modern Battlestar Galactica had built up such a head of creative steam that it was the best genre tv series on air bar none. The exceptional quality of writing extends here. The story works on multiple levels – the flashbacks to the Pegasus during the Cylon attack, another story in the present about the discovery of the old-model Cylons featuring the series ongoing characters, as well as a few lesser flashbacks to a young Adama during the first Cylon War. One of the cutest pieces of fan-service that Razor gives us is a revival of the Cylons from the original series – the ones in the clunky accordion suits with the roving red eyes, the round crab-shaped ships, even the gold centurion saying “by your command” – with a plot about primitive Cylons attempting to evolve to a more advanced form.

Razor also becomes an opportunity to shake up the familiar somewhat – during the flashbacks to the Cylon attack on the Colonies, the story follows Stephanie Jacobsen as she comes aboard the Pegasus where we are startled to see a familiar No 6 (Tricia Helfer) as a maintenance officer. The film jolts us up even further a few minutes later when we see that the No 6 and Commander Cain are lesbian lovers. By the point we see Stephanie Jacobsen trusting the No 6 with her command codes, we are cringing in our seats.

There is a certain disappointment in the way that Battlestar Galactica: Razor brings Admiral Cain back. The Admiral Cain story was most effectively told in the second season, where we learned about her willingness to sacrifice civilian ships and shoot subordinates as part of her single-handed war against the Cylons, where such ruthlessness held a shock impact. Razor does little more than flashback to depict what happened ie. rather than giving us fresh new things to be shocked about, it only portrays the things that we already know. The brutal shock of such a character is weakened and as a result Commander Cain is not such a strong figure here as she was during the series. Recognising audience familiarity with the story, Razor compensates by creating the new character of Kendra Shaw who also becomes a bridge between the flashback story and the B-story in the present.

One of the finest aspects of Battlestar Galactica: Razor is the central performance from Stephanie Jacobsen, a Hong Kong-born Australian actress who subsequently went onto become a regular on Terminator: The Sarah Connor Chronicles (2008-9) and Melrose Place (2009-10). In the part, Jacobsen gives a tough-as-nails performance that takes one back. She has some remarkable scenes, chewing out a trainee for not rebuilding his gun properly by challenging him to shoot her, or giving her frank opinion of Jamie Bamber. One of the more interesting things about Stephanie Jacobsen’s performance is that she must surely be the only lead character in a film – excepting perhaps Kurt Russell in Soldier (1998) – whose reactions are only denoted by how impassive she is. All the sympathy the character has comes from her detachment as opposed to her engagement. Eventually, Razor offers new perspective on the Cain story by showing how Kendra was a part of it and how she gains redemption over the actions that she was party to.

The series always had a stunning level of effects. Battlestar Galactica reimagined the Star Wars-patented dogfights between small ships in space by shooting these with seemingly affected handheld camerawork that put an audience into the middle of the action. We have some visually stunning effects shots here panning along the Battlestar Pegasus as it sits in the Scorpion Shipyards with one of its nacelles open to the void as tiny figures work on the repairs and then a dazzling sequence a few minutes later with the shipyard aflame during the Cylon attack.

(Nominee for Best Supporting Actress (Stephanie Jacobsen) at this site’s Best of 2007 Awards).