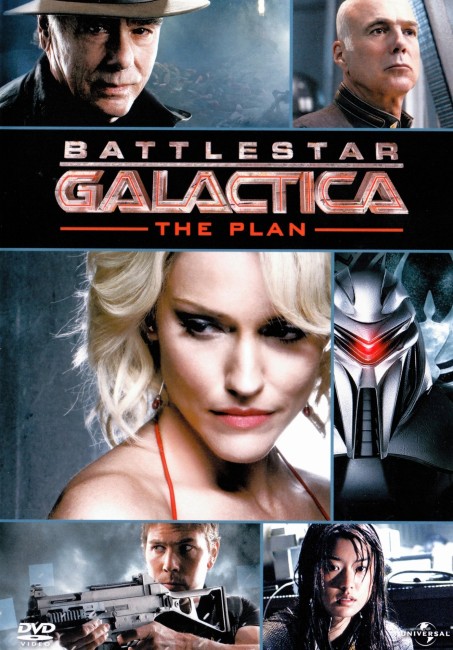 Under the guidance of No 1, Brother Cavil, the Cylons attack and decimate the Twelve Colonies. In the aftermath, a number of Cylon agents and sleepers join the Galactica fleet as it sets out in search of Earth. Aboard the fleet, Brother Cavil brings various of the Cylons agents together. Furious at their failure to entirely wipe out humanity, he organises them to conduct acts of sabotage. While many of these are successful, the agents are swayed towards the human – Simon, a doctor on one of fleet ships, loves his wife and daughter and commits suicide rather than kill them; Leoben is drawn towards a mystic understanding of Kara Thrace’s destiny. Cavil activates the Cylon sleeper Sharon Valerii but she is happy with her human cover and is constantly rebelling against the acts of sabotage she is asked to perform. Meanwhile, in the ruins of Caprica, another copy of Brother Cavil joins the resistance led by Samuel Anders, one of the Final Five, and tries to make him question himself.

Battlestar Galactica (2003-9) was one of the most successful science-fiction shows of the 00s. A remake of the old Battlestar Galactica (1978-9), it reimagined something that had originally only been designed as a quickie copycat aboard the Star Wars (1977) bandwagon into a superb series that built an excellent character ensemble and told strong stories around the survival of the remnants of humanity and their constant subversion from within by a race of machines that looked identical to them in every way. During its five season run on the air, Battlestar Galactica conducted some great storytelling.

With the series coming to an end, the show had built a strong fanbase, which gave rise to a host of spinoffs. These began in 2006 with a series of webisodes of several minutes in length that bridged story gaps between seasons. There were two spinoff prequel series with Caprica (2009-10) that dealt with the events leading up to the creation of the Cylons. Between the third and fourth seasons there was also the film Battlestar Galactica: Razor (2007), which expanded out the story of the character of Commander Cain who guest starred in three stories. Battlestar Galactica: The Plan was a further original dvd-released film spinoff.

Almost certainly, the Battlestar Galactica spinoff films were inspired by the various spinoffs tv movies that accompanied Babylon 5 (1993-8), designed as fan treats expanding out various background incidents that had been alluded to or telling historical incidents that formed the backdrop of the tv series. Battlestar Galactica: The Plan has the interesting idea of recapping the events of the series from the point-of-view of The Cylons. All of the actors who played the Cylons throughout the series have been brought back with the exception of Lucy Lawless. This also gives the opportunity for the producers to devote an entire show to Dean Stockwell whose magnificently dry and coldly inhuman performance featured some of the best written dialogue throughout the last three seasons.

The constant flipping between the points-of-view of all of the Cylon characters during the depiction of the initial destruction of the Colonies makes for a film that seems dramatically schizophrenic in its first twenty or so minutes. Eventually, the film settles down. What is of considerable ingenuity is how it reuses footage from a number of episodes of the series but blends these into new material in such a way that becomes impossible to tell what is rehashed material and what is new without going back and re-watching the original episodes. This idea of conceiving another entire story in the margins of a familiar existing text has been conducted before in efforts like Back to the Future Part II (1989) of Star Trek: Deep Space Nine‘s Trials and Tribble-ations (1996) but rarely with the ingenuity it is here where it is allowed to amplify the originals and tell a strong story of its own.

Battlestar Galactica: The Plan also takes the opportunity to expand out on some of the character aspects of the series – Sharon Valerii underwent awkward character changes that turned her from a Cylon sleeper into a trusted member of the crew but the film expands that out to explain her motivation, showing how her false personality was imprinted and how she comes to regard her fabricated human identity as her true happy self.

Time is also given over to Rick Worthy’s No 4, one of the Cylons who received little screen time, with a haunting subplot where he commits suicide to prevent his human wife and child being killed. The one explanation that the series never fully managed, which one thought that The Plan might have covered, is why Tricia Helfer’s No 6 keeps appearing inside Gaius Baltar’s head but maybe that is something to be left for a further film. As No 1, Dean Stockwell has a field day exploring the various delineations of his character – there is a particularly chilling scene where he cold-bloodedly kills a child.

Although, if anything, in taking the point-of-view of the opposition, the Cylon Plan comes across a series of comical mishaps where everything that Dean Stockwell aims to do to sabotage the fleet – something that rent the humans with fear throughout the series – is constantly being subverted by the Cylons’ weakness and attraction towards the human. Dean Stockwell’s constant frustrations at this prove a considerable amusement – there is a particularly hilarious scene where he berates Matthew Bennett’s No 5 for his fashion sense.

In this regard, Battlestar Galactica: The Plan proves to be a fan dream, although on a wider sense it is a film that very much requires that one come to it with a strong familiarity with the Battlestar Galactica series otherwise be lost as to what is happening. Knowing its context though, it becomes a work of some ingenuity.