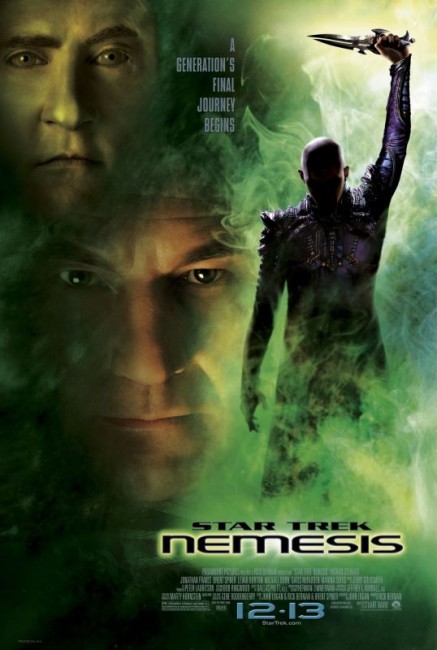 On their way to Betazed for the wedding ceremony of Commander Riker and Counselor Troi, The Enterprise crew pick up positronic transmissions from the planet Kolarus III near the Romulan Neutral Zone. Landing, they discover the dissembled parts of B-4, a more primitive version of the android Data. They are then ordered to divert to the Romulan homeworld to meet with Praetor Shinzon, who has led the normally socially shunned under-race of the Romulan sister planet Remus to usurp the empire in a coup. They are startled to find that Shinzon is human and moreover that he is a clone of Captain Picard made by the Romulans. Picard is suspicious of Shinzon’s mere desire for friendship. This is confirmed when he is abducted by Shinzon who announces he wants Picard’s DNA to prevent a breakdown inside his own cellular makeup. Picard makes an escape but Shinzon pursues them in an invisibly cloaked Remulan ship, wanting to capture Picard and unleash a deadly Theleron radiation bomb on Earth.

Star Trek: Nemesis distances itself from the series regular voices. Jonathan Frakes was presumably too busy making Clockstoppers (2002) and Thunderbirds (2004) to direct and this time the captain’s chair has been handed over to Stuart Baird, the first series outsider to direct one of the films since Nicholas Meyer in 1982. British-born Baird, a longtime Ken Russell associate, is best known as an editor and has worked on most of Russell’s films of the 1970s and most of Richard Donner’s films since, with credits on the high profile likes of The Omen (1976), Superman (1978), Ladyhawke (1985) and the Lethal Weapon films under his belt, among numerous others. Baird previously ventured out as a director with undistinguished action films such as Executive Decision (1996) and U.S. Marshals (1998).

The more one thinks about it, Star Trek seems to work the least well of all on the medium of the big screen. The classic Star Trek movies started well but soon drowned in cutsie fannish self-congratulation, while the Star Trek: The Next Generation films have remained little more than special effects vehicles in search of stories. None of the Star Trek: The Next Generation films have ever moved with the conceptual dazzle and tight scripting of two-part episodes such as The Best of Both Worlds or All Good Things, or even lesser two-parters like Unification or Chain of Command.

Star Trek: Nemesis offers up a stunningly banal plot concerning the Romulan political machinations and the cardboard ‘nemesis’ of Captain Picard’s clone son. There is a remarkable lack of intrigue to the political story and no depth at all to the character of Shinzon. He is just a standard science-fiction villain in a shiny cape threatening the universe and comes with almost nothing in the way of depth or interesting shading.

There is a subplot about Data finding an earlier primitive version of himself – this is revealed in the film’s sole twist to be a trap set by Shinzon but the character of B-4 is then almost entirely forgotten about until the end. There is a new race of villains in the Remulans but they are nothing more than standard ugly mug alien faces and moreover have their threat cut out from under them the moment one realises they look exactly like the orcs out of Lord of the Rings. There is a dull action sequence with dune buggies shooting out with aliens, ending on a stunt jump that only takes place in the unreal realm of cartoonish action movies.

Even more so than in the previous Star Trek: The Next Generation films, the supporting principals take a back seat to the action – it is almost entirely ‘The Picard and Data Show’. This is a film that feels like it could have done with some of the light relief that infected the Classic Star Trek movies where all the regulars would come out like a well-rehearsed comedy troupe and each had their own little piece. There are also a small appearance from Star Trek: Voyager‘s Kate Mulgrew and cameos from former Star Trek: The Next Generation regulars Wil Wheaton and Whoopi Goldberg, with only she getting a line, and all to astonishingly little purpose. (Director Bryan Singer can also be spotted in a cameo as a crewman who gets blown out the bridge window).

In fact, one realises about halfway through that Star Trek: Nemesis is actually a Next Generation remake of Star Trek II: The Wrath of Khan (1982). The two films have almost identical plots – a genetically engineered villain who is determined to obsessively settle an old score with the Enterprise’s captain; the villain with his hands on a universe-threatening weapon; the Enterprise captain discovering the long lost ‘son’ he never knew he had; a climactic hideout/shootout between The Enterprise and the enemy vessel, both badly damaged, in a nebula; and one of the series regular characters sacrificing their life by entering the engine room to stop the bomb from going off. The resemblances are uncanny.

Star Trek: Nemesis almost redeems itself from a dull plot by a decent effects climax. There are some impressive scenes with ships shooting out in the nebula and especially where the Enterprise rams the Scimitar, and a nifty sequence where the bridge viewscreen blows out in an explosive decompression. Good too is also the climactic superhuman jump between the two ships and the moving self-sacrifice. (Although this self-sacrifice annoyingly contradicts the future of the series shown in the final episode All Good Things where we saw that said character was alive and well. At least there is a coda that allows for the character’s continuation after a fashion).