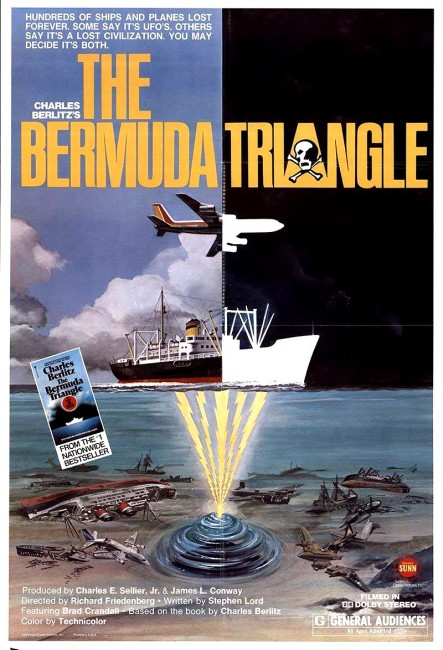 The Bermuda Triangle is an area that supposedly covers around a million square mile area with its vertices at Miami, Puerto Rico and Bermuda. The term first originated in a newspaper article in 1950, speculating about the large number of ships and aircraft that had disappeared in the area. The idea was soon taken up by fringe science theorists who have offered all manner of explanations that have included everything from UFOs, timewarps and aliens to technology left over from Atlantis. However, the idea of the Bermuda Triangle disappears under sceptical examination. Nobody is certain of the exact area, which has often been expanded anywhere between a half and one-and-a-half million square miles by differing authors in order to include incidents. Sceptics, the US Coast Guard and marine experts have conducted examinations – showing that some of the claims made of ships vanishing in mysterious circumstances have been wildly distorted or have neglected to mention that they were later found – and demonstrated that statistically no more vessels sink or disappear in the area that any similar area of ocean in the world. This does not appear to have stopped the popularity of the myth and there have been numerous films and tv series that have employed the idea of the Bermuda Triangle.

Schick Sunn Classics was a US company that specialised in a series of cheap tv adaptations of classic stories – The Last of the Mohicans (1977), The Time Machine (1978), The Fall of the House of Usher (1979), The Legend of Sleepy Hollow (1980), The Adventures of Huckleberry Finn (1981) and The Adventures of Nellie Bly (1981). They also made a series of sensationalistic cinematically-released documentaries on fringe science subjects that have ranged from Bigfoot in Mysterious Monsters (1976) to life after death in Beyond and Back (1978) and The Bermuda Triangle here, as well as Biblically-themed documentaries such as In Search of Noah’s Ark (1977), In Search of Historic Jesus (1980) and the tv series The Greatest Heroes of the Bible (1978), plus one fictional UFO conspiracy film with Hangar 18 (1980).

This is a documentary based on the book The Bermuda Triangle (1974) by Charles Berlitz (1913-2003). Beginning with The Mysteries of Atlantis (1969), Berlitz became a writer who specialised in fringe science subject matter, including works on Ancient Astronauts, UFO phenomena, Roswell and the supposed archaeological discovery of Noah’s Ark. He was also the first author to popularise the Philadelphia Experiment with the book The Philadelphia Experiment – Project Invisibility (1979). All of Berlitz’s woks were widely criticised in sceptical circles for their frequent disregard of facts in favour of sensationalism and fringe science theories. The Bermuda Triangle was quite a reasonable success for Berlitz – this can be demonstrated by the film here where his name appears above the title Charles Berlitz’s The Bermuda Triangle – while around the same time, his book also spawned a Mexican-made fiction film The Bermuda Triangle (1978), which is often confused with this title due to the nearness of dates.

It probably need not be said that Schick Sunn Classics buy wholly into Charles Berlitz’s fringe science theories. The film starts out as a documentation of the missing ships but soon veers off into talking about Berlitz’s lunatic theories about the disappearances being caused by time warps and super-powerful energy crystals left over from Atlantis, which are rather amusingly represented by footage taken from Atlantis, the Lost Continent (1961). Here the film shoots itself in the foot by making wacky claims about how a geological formation found on the ocean floor has the same dimensions as The Pyramids or readily quoting mystic crank Edgar Cayce as a reliable source (Cayce gained the nickname The Sleeping Prophet for making medical diagnoses in a trance, along with various prophecies of the future that failed to come past).

In the latter half, the film also manages to wind in discussion of The Philadelphia Experiment and UFOs, even though this has little to do with the Bermuda Triangle. Or phrases like “some physicists have suggested that the plane might have entered some dimensional window, a space window if you will, which caused an inversion of time and space thrusting her plane into an early period of time … The experts insists that it’s theoretically possible,” a word salad of scientific terminology that is nonsensical in terms of actual meaning.

To its credit, the film keeps to some of the better documented cases of disappearances. On the other hand, for a documentary, this is peculiar in its lack of any interviews with subjects who were witness to the incidents. In every single case, the supposed witnesses and press conferences have been staged for the camera with actors. This does make the narrator’s claim that it is based on “stacks of sworn testimony” to be rather incredulous.