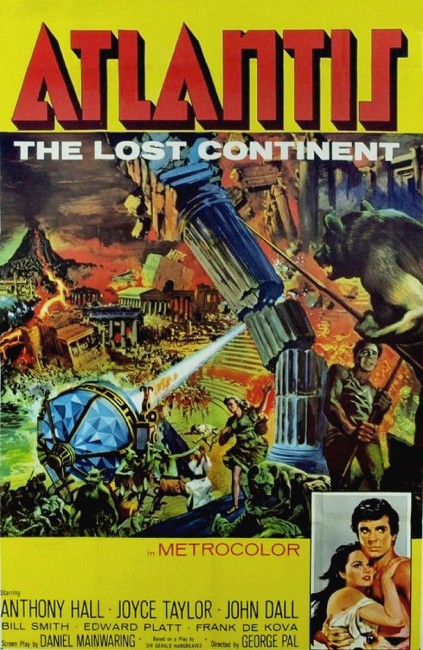 While at sea, the Greek fisherman Dmitrius finds a girl adrift and rescues her. She claims to be Antilea, a Princess of Atlantis. While tending her, Dmitrius falls in love with her. Recovering, she tries to steal his boat. He stops her but she challenges him to sail to her home where she promises to reward him with great riches. They set forth but are instead captured by an Atlantean submarine. Back in Atlantis, he, like all outsiders, is made a slave. He curses her name, although she is unaware of what has happened to him. Dmitrius takes the only recourse – to fight for his freedom in the arena – in order to win his Princess and stop the plans of the king’s power-mad advisor to declare war on the outside world.

Atlantis, The Lost Continent was George Pal’s first venture into Cinerama. Pal constructs the film as a giant spectacle in the style of the reigning box-office fad for Biblical/historical epics like The Ten Commandments (1956), Ben Hur (1959) and Hercules (1958). As with most of these spectaculars, the characters, heroics and dialogue are as cardboard and one-dimensional as the giant sets that dwarf them. The plot is a distillation of potboiling cliches from Arthur Conan Doyle, H. Rider Haggard, Pierre Benoit et al and comes packed with an array of colourful science-fictional gadgetry – fish-shaped submarines, deadly rayguns and scenes where slaves are turned into animal hybrids.

Full marks go to the special effects team and production designers – Atlantis, The Lost Continent should be seen in its original Cinerama format if possible or at least some modern widescreen DVD presentation – but the characters and dramatics are stolid. The film was based on a stage-play written in 1949. Seeing the giant-sized spectacle on display here, the mind boggles at what the original stage-play must have been like – the film has either adapted the play very liberally or the original must have been a unique spectacle. George Pal does cut his budgetary corners somewhat by borrowing special effects footage from elsewhere, notedly the climactic volcanic eruption from Quo Vadis (1951).

As with many of George Pal’s films, there is a distinct Christian/Catholic undertow – the Atlantean culture is seen as pagan and corrupt and there is a speech at one point advocating a turn to the One True God, with the implication that Atlantis’s fate is in some way tied to its rejection of this.