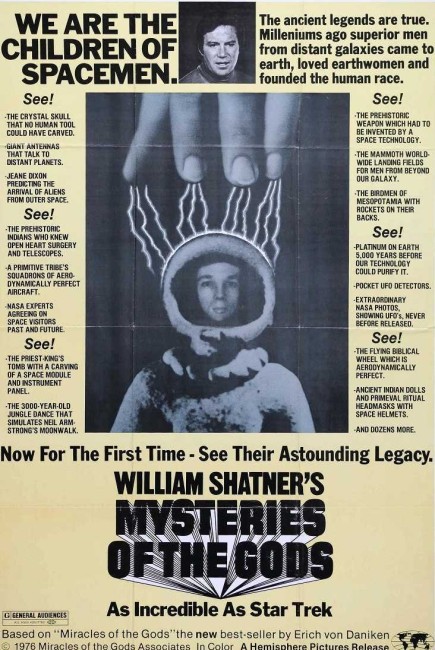 Erich von Daniken is a fascinating figure in the realms of Fringe Science. Born in Switzerland in 1935, von Daniken came to international fame with the publication of his book Chariots of the Gods (1968) in which he put forward the thesis that has occupied his publishing career – namely that aliens have come to Earth over the millennia and influenced the ancients. He claims that evidence of such contact can be found in ancient monuments, inscriptions, illustrations and references in historic texts. In Chariots of the Gods and a further twenty books published to date, von Daniken argues that many works and mysteries of ancient architecture – The Pyramids, the heads at Easter Island, Stonehenge, various references in The Bible and numerous other examples – can be explained by or make reference to these alien visitations. Von Daniken’s work has been ridiculed by historians and archaeologists but inspired a fad throughout the 1970s, while these ideas have in turn bled into a number of other science-fiction works. (For the influence of Von Daniken’s theories on film see Films About Ancient Astronauts).

Austrian director Harald Reinl made a film of Von Daniken’s book with Chariots of the Gods (1970) and then went on to this follow-up, which was originally made under the title Botschaft der Götter (Message from the Gods). It was the practice in the 1960s for imported films to be dubbed into English and the American production team to claim their minimal efforts as directors and producers. See efforts like Battle Beyond the Sun (1963), Willy McBean and His Magic Machine (1965) and King Kong Escapes (1967). This appears to have happened here where Botschaft der Götter has been bought up but Harald Reinl’s name and that of the German crew have been removed from the English language print.

On the other hand, unlike most of these other efforts, the incoming director Charles Romine has actually shot a substantial amount of new footage. This takes up a good part of the film, in which William Shatner travels to interview various scientists, psychics, UFO believers and the owner of a crystal skull. This was Shatner clearly caught in a career lull between the end of Star Trek (1966-9) on tv and its revival as a series of feature films – indeed, around the same time fellow Star Trek star Leonard Nimoy hosted an entire tv series devoted to unexplained mysteries with In Search Of … (1977-82).

In many regards, Mysteries of the Gods is a better film than Chariots of the Gods. At least, it interviews some experts whereas the original was simply an opinion piece that presented pieces of evidence in a visual essay for us to examine. This doesn’t exactly present interviewees that examine von Daniken in a sceptical light, although at least some of them say the evidence hasn’t been proven. It also makes a much more sweeping tour of places of the world than Chariots of the Gods did, travelling to often remote areas to offer up locations and ancient sites that are claimedly evidence of alien visitations. There is even a very brief glimpse of Erich von Daniken himself driving on his way to investigate one of the locations.

The tours of the world (and recycled footage) are quite sweeping, drawing connections between the Lascaux cave paintings, Aborigine rock paintings, even going so far as to contrast a ritual figure in a rattan suit of the Kayapas Indians with the figure of an astronaut, along with other claims that Hopi Indians and Mayan carved figures wearing headdresses are representations of figures wearing spacesuits. The film tours massive ancient carvings such as Na Madol, the moai of Easter Island, the granite spheres of Costa Rica, Uxmal in Mexico, the city of Chan Chan in Peru, the Stones of Karnak and the Horse of Uffington in Oxfordshire among others. We even visit the Stones of Ica that supposedly depict open heart surgery and magnifying glasses (the latter of which were proven to be a hoax even before the documentary came out).

The various locales toured do a reasonable job in drawing connections between these cultural artifacts and alien visitations (at least as long as one has no real archaeological or cultural anthropological knowledge). On the other hand, the very profusion of so many examples tends to work against the film’s thesis. In other words, does every single case of some tribal figure wearing a ritual headdress mean it represents someone wearing a spacesuit? Could any of this not just be some kind of creative tribal costuming? Does the fact that large earth drawings were made necessarily entail a belief in astronauts – can’t they simply have been made by people who worshipped the heavens? The equivalent might be someone two thousand years in the future uncovering contemporary SF artwork and concluding it obviously meant present-day people had encountered aliens and travelled to the stars.

Shatner’s narration is constantly making claims “We have no answers … We don’t know,” which by inference draws us to conclude that the answers therefore can only be alien visitors. At one point, in regard to talking about the Aborigine’s use of a boomerang, Shatner states: “How could these primitive people have discovered the aerodynamic refinement of a weapon that returns to the thrower if it misses its target? It’s unlikely it could have been invented or copied by coincidence.” But unlikely or coincidence to whom? Archaeologists and anthropologists have zero problem with the boomerang as a weapon that naturally evolved among the Aborigines (and other cultures ranging back to Ancient Egypt).

I would disagree with the logical leaps being made here. Mysteries of the Gods was made several decades before the existence of the internet. Do a look at the Wikipedia pages for any of the abovementioned archaeological sites and you will find perfectly mundane cultural and archaeological explanations for these mysteries. Granted not all mysteries have answers that we know and there are some unanswered questions in the absence of written historical record. However, it is a vast leap to go from a lack of knowledge about an historical mystery to conclude it must be evidence of alien visitors. It should also be noted that in none of the abovementioned Wikipedia pages for these sites does anybody opt for an explanation that involves alien visitors.

There is an interview with Jesco von Puttkamer, a senior NASA scientist, who calls Von Daniken’s claims “an interesting theory” but that he is uncertain about the evidence to back them up, which is probably more polite and respectful a response than claims of Ancient Astronauts would get from most scientists. He then goes on to add a mystery of his own about how human DNA gained the complexity it needed to evolve intelligence in the time it did with the implication it must have come from elsewhere, something the film immediately leaps onto and runs with, again positing aliens as the answer.

The documentary does play a little free and easy with science – it is there when it suits something being discussed, to be ignored when it doesn’t. Case in point being when it discusses Einsteinian Time Dilation – that as one approaches close to or travels at the speed of light, time for the traveller slows down relative to the rate it passes for a stationary observer such that a journey might only be a matter of months for the traveller whereas hundreds of years would pass by for someone on Earth. This is all good science. It is used to discuss how aliens could travel vast distances. However, what seems to be conveniently omitted is that in order for an object to travel near the speed of light is that it must attain infinite mass, something that would be impossible within physics as we understand it.

Mysteries of the Gods gets into a more dubious area when it ventures into discussing UFO phenomena. The film offers up several photos and Shatner makes the meaningless statement “These pictures are considered genuine by those who believe in UFOs.” (As evidenced by people all the way from Creationists, Flat Earthers, anti-vaxxers to those who live in QAnon conspiracy land, what someone who believes in a fringe theory considers to be genuine frequently bears no resemblance to what is factually true). On the other hand, physicist Dr Dennis Hauck (who it should be added later wrote a biography of Shatner, as well as books on alchemy and ghosts) does approach the examination of UFOs with something resembling scientific scepticism.

On the other hand, there are the interviews with UFO expert Daniel Cetrone. Shatner asks the highly leading question: “Do you have any thought on our ability to contact UFOs through telepathy? … You mean there are people prepared to receive an extraterrestrial visitor?” While you mind is reeling at the assumption the question seems to make – that telepathy is real – this gets the reply from Cetrone “I am being prepared for the frame of mind that is necessary to greet an extraterrestrial visitor.” Although quite what this frame of mind might be and whether it involves telepathy is never explored any further.

And then there is Shatner’s interview with Anna Mitchell-Hedges, the owner of a crystal skull. Shatner marvels over its mystery while Mitchell-Hedges tells how her archaeologist father found it among Mayan ruins. (She toured the world displaying it well into the 1990s). As Shatner wows at the skull and Mitchell-Hedges tells a story about an Australian girl who died after laughing at the skull, it is worth noting that all of her claims are a hoax. She has made various differing claims as to how the skull was found but evidence has come to light that her father purchased it in a Sotheby’s auction and he makes no mention of either he or his daughter having uncovered it in South America in any of his journals. An examination of the skull by the Smithsonian in 2007 following Mitchell-Hedges’ death revealed that it had been created using modern high-speed drills ie. technology that would not have been available to the Mayans. This is something that makes her claims here that it was made by five generations of Mayans over the span of 150 years using only “sand and herbs” to grind it down to a smoothness into a complete fiction.

Another of these highly dubious inclusions is Shatner’s interview with the astrologer and psychic Jeane Dixon (1904-97). Dixon gained a celebrity in the 1960s after supposedly predicting the assassination of John F. Kennedy. She made many other predictions but also quite a few that failed to come to pass – such as there would be world wars in 1958 and 2020, that a comet would strike the Earth and there would be a female US President in the 1980s. The pitfalls of Prophecy are more than clearly demonstrated here where she makes the prediction that aliens will arrive on Earth “next August”. The film was released in 1976 and quite clearly no aliens ever appeared to the world in August of 1977, demonstrating more than abundantly that prophecy only makes sense in hindsight and that so-called prophets tend to sweep their misses under the carpet and ignore them.

Harald Reinl was an Austrian born director who was active in German cinema between the 1950s and 1986 (when he was stabbed to death by his wife). He was noted for a number of Edgar Wallace adaptations that frequently ventured into horror material during the 1960s, including Hand of the Gallows (1960), The Forger of London (1961), The Strangler of Blackmoor Castle (1963), Room 13 (1964) and The Sinister Monk (1965), as well as two Dr Mabuse sequels The Return of Dr Mabuse (1961) and The Invisible Dr Mabuse (1962), and other efforts such as The Carpet of Horror (1962), Siegfried (1966) and the Edgar Allan Poe adaptation The Torture Chamber of Dr Sadism (1967). Charles Romine’s sole other credit as director has been the adult horror film Behind Locked Doors/Then Came Ecstasy (1968).