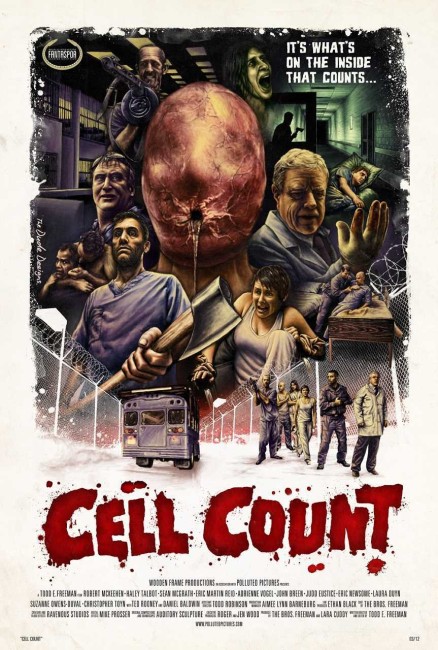 Russell Carpenter’s wife Sadie is on her deathbed. Her doctor Victor Brandt offers Russell two choices – thousands of dollars of medical bills followed by her dying versus her signing into an experimental program he runs that will bring her back to life. Russell agrees as long as he can join her in the program. They come around in a locked facility along with six others. As they settle into the program, it becomes apparent that Brandt has conducted some radical medical procedures, including implanting bugs inside people’s bodies. Others in the group then begin to undergo wild biological meltdowns.

Cell Count was the sixth film for Todd E. Freeman, a Portland, Oregon-based filmmaker who usually works with his brother Jason. The Brothers Freeman have made a number of films, including Two-Fisted (2004) and such genre entries as Reynard the Fox (1999), Come Hell or Highwater/Pay for Hell (2008), Wake Before I Die (2011) and Hope (2012), although none of these have attained a particularly high profile.

Cell Count reminds of one of the locked room thrillers that came out after Saw (2004) – films in which various people are trapped in a locked room or facility facing a series of deaths traps and/or something eliminating them. In particular, one is made to think of efforts such as Cube (1997), the progenitor of these, Shadow Puppets (2007) and Exam (2009) that create conceptual puzzles out of what is supposedly going on. The unfortunate problem with Cell Count is that it has not done a very good job in constructing its puzzle. The situation plods along, there is no twisty jolts that keep pulling the carpet out from under us, no urgency to anything that seems to happen inside the complex.

Certainly, after a certain period of time, the film introduces a bunch of wild effects scenes – Eric Martin Reid is holding the dog as it suddenly explodes in his hands; Judd Eustice coughs up something that looks like his entire lung, before it abruptly whips about and covers his face apart from a tiny plug for him to breathe through. Or when Sean McGrath coughs up something like a two-metre long snake. The film’s one major bonus during the latter half is the presence of the tall, gaunt and incredibly haunted looking Ted Rooney, an actor who should get far more high-profile work that he has so far.

By this point, one’s curiosity about what is going on is undeniably piqued. The unfortunate downside is that Todd E. Freeman fails to do anything to make Cell Count more than the provision of weird effects at regular intervals. The even greater problem is [PLOT SPOILERS] that the film reaches an end without any kind of explanation about anything that happens throughout – what the disease talked about is, what the experiments that Christopher Toyne are conducting are intended to prove, even what world they are in as the last few scenes (and the surprise appearance from Daniel Baldwin in a negligible role) would seem to suggest that we are in the midst of some type of quasi-apocalyptic siege situation.