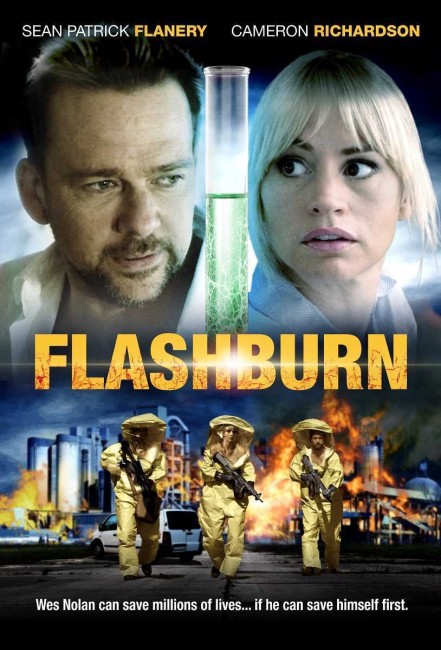 A man wakes up in a vehicle that has crashed inside a warehouse. He has no memory of who he is. A monitoring voice Lazarus tells him that he is Dr Wes Nolan, a virologist who was responsible for the creation of a virus that has devastated much of the world. Lazarus knows that Wes has devised an antidote. He is kept a prisoner in the warehouse with an ankle bracelet that provides electric shocks if he steps outside of the prescribed area and with threat made against his wife and daughter if he does not cooperate. He is then joined by Kalie Jorgensen, who says she was Wes’s assistant. Wes is not sure what the truth is as evidence indicates he may be involved with Kaylie, while Lazarus insists Kaylie cannot be trusted. The two of them try to help Wes recover his memory and find the whereabouts of the antidote, at the same time as armed gunmen threaten to break in to the warehouse.

Giorgio Serafini is a director who was born in Italy, raised in Belgium and then moved to the US. As director, Serafini has made various films in the thriller and drama fields. These include genre entries such as Don’t Let Me Go (2013) about a journey through a haunted forest; 200 Degrees (2017) with Eric Balfour imprisoned in a heat kiln with the temperature being turned up, the home invasion film The Executioners (2018); the revenge film Unhinged (2018) and the children’s film Pegasus: Pony with a Broken Wing (2019). Serafini co-writes Flashburn with his lead actor Sean Patrick Flanery, who gained a name as the title character in The Young Indiana Jones Chronicles (1992-3) and has since maintained a reasonable career in B movies.

The Amnesia plot is always a good hook for a film. Usually this has a protagonist wake up with a blank memory whereupon they are promptly propelled into aa twisty plot as they try to piece together the clues about who they are. See films like The Groundstar Conspiracy (1972), Mulholland Dr. (2001), Time Lapse (2001), The Bourne Identity (2002), Fractured (2013), Amnesiac (2014), The Maze Runner (2014) and Radius (2017), not to mention Christopher Nolan’s ingenious Memento (2000). Those films that fall within genre guidelines are usually Conceptual Breakthrough stories where the protagonist awakens to the true nature of who they are and the world around them.

Flashburn kept reminding of Unknown (2006), which had five men with no memory of who they are waking up in a warehouse. That film had a mundane plot where the five men had been affected by an amnesia-inducing chemical and had to work out who among them was police and who was criminal. Here we only have one man in a warehouse (joined by a computer voice and partway through a non-amnesiac woman Cameron Richardson who may be Sean Patrick Flanery’s girlfriend or just an assistant).

The film is also an Imprisonment Thriller where Sean Patrick Flanery is outfitted with an ankle bracelet that administers electric shocks if he strays beyond the yellow lines, while there are also people with guns trying to break into the warehouse. The plot hangs on Flanery having to unlock access to a computer that contains the antidote to a plague he created that is ravaging the outside world.

The scenes in the warehouse are interspersed with a parallel plot where a team of soldiers (also led by Cameron Richardson) is engaged on a mission to recruit a man for an operation (the details of which are never made clear). The double appearance of Cameron Richardson as a different character in both storylines indicates we are in some kind of reality bender concerning the true nature of Sean Patrick Flanery’s situation. Giorgio Serafini’s failing is that he has all the elements set up – a strong opening hook, the imprisonment thriller aspects, a puzzle as Sean Patrick Flanery tries to find the antidote, the suggestion that we are in for a reality bender – but never does much to wind up the tension or jolt us with unexpected twists. The plot just plays out through fairly routine stock thriller elements.

You do have to admit that the film reaches an interesting ending. [PLOT SPOILERS]. It is one reminiscent of Open Your Eyes (1997) where we pull back from everything that is happening to find that the entire warehouse is a virtual simulation being created by a computer for the comatose Sean Patrick Flanery in order to access key information about the whereabouts of the antidote. Cameron Richardson is the designer of the scenario who has written herself into the simulation as a way to prompt Sean Patrick to uncover his memories. The film goes out on an upbeat reconciliation before turning this on its head in a bleak fadeout.