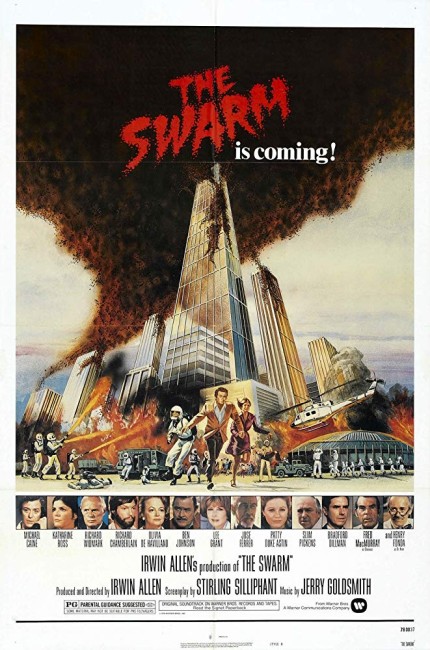 Army troops arrive at a military installation in Texas to find that all the personnel have been killed, excepting one survivor – a civilian, entomologist Bradford Crane. Crane offers the outrageous theory that the soldiers were killed by a swarm of African killer bees that attacked the base, mistaking the centre’s sirens for their mating call. The general in charge finds the notion ridiculous but receives orders direct from The President to cooperate with Crane. Angered when the bees kill his parents, a young boy firebombs their nest, so enraging the bees that they attack and destroy a nearby town. Crane gathers military and scientists in order to find a means of stopping the swarm as it heads for Houston, destroying all in its path.

Irwin Allen was one of the great schlock producers and directors of modern cinema. Irwin Allen always seem to approach his films less as dramatic entertainment than as a kind of P.T. Barnum-styled three-ring circus where the amount of lurid spectacle and the number of big name cast members that he could pack in was the value of the film in itself. Allen first emerged in the 1950s. After producing a handful of cheap comedies, he made distinction as a director with various documentary features such as The Sea Around Us (1953) and The Animal World (1956) (which featured a dinosaur sequence that contained some of the earliest work of Ray Harryhausen).

Allen then found his calling with Cinemascope spectacles such as The Story of Mankind (1957) (a film as highly regarded in Golden Turkey circles as The Swarm is), The Big Circus (1959), Voyage to the Bottom of the Sea (1961) and Five Weeks in a Balloon (1962). Tiring of widescreen spectacle, Allen then branched out into television as a producer, making science-fiction series such as Voyage to the Bottom of the Sea (1964-8), Lost in Space (1965-8), The Time Tunnel (1967) and Land of the Giants (1968-70), all of which have developed a notoriety for Allen’s flagrant disregard of science and logic.

When interest in Irwin Allen’s particular brand of colourfully ridiculous ‘sci-fi’ started to wane, he returned to feature filmmaking, producing The Poseidon Adventure (1972). With its blend of melodramatic soap opera, ersatz drama, special effects spectacle and above all big name stars, The Poseidon Adventure was an enormous box-office success and inaugurated the genre of the disaster movie. Irwin Allen was at the forefront of the genre – the disaster movie was his calling in life – and in quick time he directed/produced the likes of The Towering Inferno (1974), The Swarm, Beyond the Poseidon Adventure (1979) and The Day the World Ended/When Time Ran Out (1980), not to mention even copying himself and producing a host of cheap movie-of-the-week knockoffs of his own films. (For more of an overview of the genre see Disaster Movies).

The Swarm has been called The Worst Film Ever Made and, if not The Worst, is always among the top two or three in most people’s list. It is a bad film no doubt about it. However, if there is one thing that one could accuse Irwin Allen of, it would not be failing to entertain – a problem that one could not accuse Allen’s two subsequent disaster films, Beyond the Poseidon Adventure and The Day the World Ended/When Time Ran Out, which are a whole lot worse and moreover unwatchably dull, of being. (Bad movie watching really requires a new critical language where bad should not have to be a dumping ground for overinflated pretensions, the enterprisingly cheesy, extremely low-budget ineptitude and A-budget flops all at the same time).

There are even times when The Swarm seems on the verge of being a good film – like the opening first ten minutes where Allen suggests something out of The Andromeda Strain (1971) and creates an immediate sense of mystery and intrigue amid the bustle of military hardware and images of the vac-suited figures moving through the military installation finding everybody dead.

The script comes from Stirling Silliphant. Stirling Silliphant once won an Oscar with the script for In the Heat of the Night (1967) and was responsible for writing some intelligent genre classics such as Village of the Damned (1960) and Charly (1968), before he was suborned to the Irwin Allen camp with The Poseidon Adventure and let his career slid waaaay down. Silliphant churns out some astoundingly awful dialogue. The cast stand about in mute embarrassment having to deliver such lines – all except for Michael Caine who bawls his out like he were tackling an SAS assault course. The most embarrassed to emerge from the show is Richard Widmark as a five-star general who has to stiff-neckedly deliver lines like: “”I always credit my enemy [the bees] with equal intelligence” and “The occupation of Houston has begun – Thaddeus Slater is the first general in history to get his butt kicked by bees.” Silliphant serves block scientific text undiluted, no doubt to impress, but at the same time remains woefully ignorant on such subjects as nuclear reactors, which the bees are somehow able to trigger into detonation simply by invading the control chamber.

The most telling thing about the script is that it uses the same plot device to dispose of the bees as Bert I. Gordon did in his Z-budget giant grasshopper film Beginning of the End (1957). Although this is something that is the film’s forte, for when considered as a 1950s-styled B-budget schlock movie rather than as a bad all-star spectacle movie, The Swarm proves surprisingly entertaining.

It is only when Irwin Allen feels the need to stage ludicrous scenes with bees causing a train to crash (something made all the more silly for the inept model work) or the aforementioned detonation of a nuclear reactor, that his melodramatic pretensions get the better of The Swarm‘s cheesy modesty. The special effects are incredibly poor for the sizeable budget that Irwin Allen was operating with – the bee attacks often look like dots superimposed over the foreground of a scene.

Irwin Allen’s other works of genre interest are:– as producer/director/writer of the equally notorious The Story of Mankind (1957) wherein various historical figures up in Heaven debate about whether to destroy humanity, which becomes an opportunity for Allen to rehash stock footage from various historical spectacles; as producer/director/writer of the remake of The Lost World (1960); as director/producer/writer of the Voyage to the Bottom of the Sea film (1961); as producer of the tv series Voyage to the Bottom of the Sea (1964-8), Lost in Space (1965-8), The Time Tunnel (1967) and Land of the Giants (1968-70); as director/producer of City Beneath the Sea/One Hour to Doomsday (1971), a failed tv pilot, which Allen then released cinematically; as producer of The Time Travelers (1976), another unsold tv pilot, written by Rod Serling; as producer of the tv mini-series The Return of Captain Nemo (1978), which was theatrically released internationally as The Amazing Captain Nemo (1978); and as producer of an all-star tv mini-series adaptation of Alice in Wonderland (1985).

The Swarm should not be confused with Swarm/Destination Infestation (2007), an equally silly film about a swarm of mutant ants taking over a plane, and the French The Swarm (2020) about a woman who raises a swarm of killer locusts.