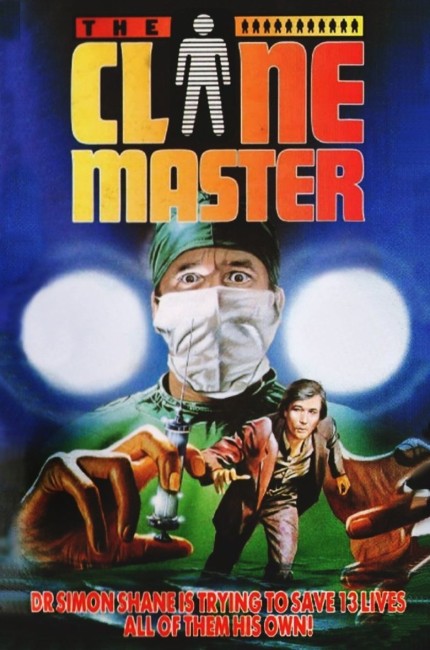 At a secret desert laboratory, biochemist Dr Simon Shane is engaged in an experiment to perfect a human cloning process. He and his departmental superior Dr Ezra Louthin receive funding from a government agency. This is thrown awry when the agency’s representative Harry Tiezer is murdered and it is found that their office is bugged. Louthin sends Simon to Washington to find which government agency was funding them but all of them deny any knowledge. Louthin is then abducted. Simon is contacted by Albert Salt, who claims to be their mysterious backer (and was the one responsible for killing Tiezer) and offers unlimited funding to complete the cloning process. Simon takes colleague Gussie Woczek into his confidence and reveals what he was working on – a project to create twelve clones of himself. As the clones awaken, all having Simon’s memories, he discovers that all of them share a telepathy.

The idea of human cloning was introduced to the world by geneticist J.B.S. Haldane in 1963 and immediately created a buzz. It was not long after that we stared to get several films on the subject with The Resurrection of Zachary Wheeler (1971), The Clones (1973), Parts: The Clonus Horror (1979) and the high-profile The Boys from Brazil (1978). There was then the best-selling book In his Image: The Cloning of a Man (1978) by David Rorvik that made the claim that a millionaire had hired a team of scientists to create a clone of himself, although this is widely believed to be a hoax. The book however was a best-seller and created much fascination with the cloning process. The Clone Master was a tv movie that almost certainly came out building on the fascination of the Rorvik book – the book was released in March of 1978 and the film aired in September of that same year. For more detail on the cinematic depiction of cloning see Films About Cloning.

The Clone Master starts with a good deal of promise – heck, screenwriter John D.F. Black even manages to make the business of scientific funding and oversight into something dramatic and interesting. The opening scenes are aided enormously by a performance of peppery fire from Ralph Bellamy and a series of sharp turnabouts that go from discussions with the backers (Mario Roccuzzo as a dull-minded bean counter) to abrupt revelations about bugging of the office (this was the era of Watergate – and just to remind us there is a prominently included shot of the Watergate Hotel in the background during the trip to Washington later in the show). Next, Roccuzzo is locked in a car on a beach and a capsule of poison gas thrown in with him. These scenes are well written and prove instantly absorbing in their abrupt twists.

Thereafter, the film keeps us engaged with a busy and well constructed plot. Scientists today might have a few quibbles with the way we see science being practiced – nobody seeming to raise eyebrows at academic funding from mysterious backers who hand over suitcases of money, shadowy government departments that don’t seem to exist (one of the more incredulous parts of the film is where Art Hindle does a tour of the various government agencies in Washington D.C. and is greeted with indifference whereas in reality you find it hard to believe every agency would not be tumbling over themselves to get a piece of the pie regarding a human cloning process) and no apparent oversight from the university where they are based. I can’t really say whether or not this was a credible for how science was done in the 1970s but it sure seems as dodgy as hell over forty years later.

Certainly, when the film leaves behind its conspiratorial happenings and dives off into the purely science-fictional, it becomes a whole lot more entertaining. It takes nearly half the film to get to the revelation that Art Hindle has created a dozen clones of himself, all of which are due to wake up several hours apart. There are some fascinating scenes with the clones grappling with the existential question of being clones, at first denying it and then recognising Hindle as their ‘father’. Art Hindle, who not long after this was cast as Frank Carveth in David Cronenberg’s The Brood (1979), gives a fine series of performances where he manages to imbue the different copies with an individuality (not to mention is aided by reasonable effects trickery that allows multiple copies of himself to appear in a scene). Equally fascinating is when the clones start demonstrating telepathy and the ability to share thoughts. There is some particularly impressive sets constructed for the laboratory.

It is thought that The Clone Master was intended as a pilot for a tv series. Given that assumption, it leaves you scratching your head wondering what the series would have been like – one where Art Hindle and twelve copies of himself solve crimes and mysteries on a weekly basis? Or a variant on The Fugitive (1963-7) or The Incredible Hulk (1977-81) with he and the twelve clones on the run from their backers? Nether seems a very gainly concept. The era was still stuck in the concept of each tv episode being a self-contained story so it is unlikely you could have had something like the ongoing drama of the later, very similar tv series Orphan Black (2013-7).

That said, the film arrives at a resolution that seems to contradict any idea of an ongoing series with Art Hindle despatching the clones to take up jobs and different identities all around the world. The film also seems to miss many of the possibilities for developing suspense out of the idea – there are scenes where the clones combine forces to set the lab on fire and stop the bad guy towards the end – although you feel that the idea of multiple copies sharing their thoughts could have been put to more fascinating possibilities than that.