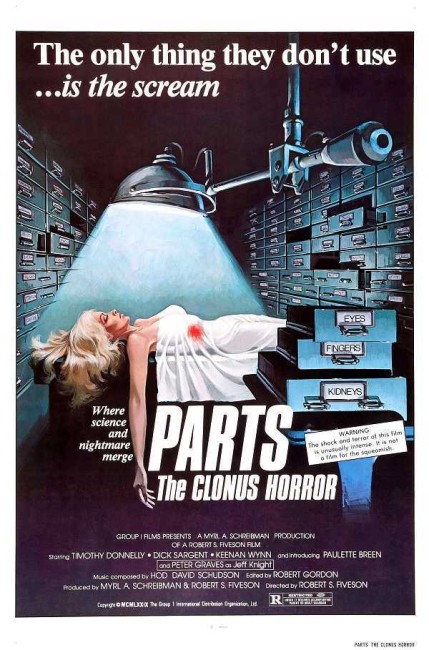 In a special facility kept away from the rest of the world, a group of people are trained and kept in perfect health. Each of them lives with the belief that one day they will be allowed to go to America where they can live in perfect peace. However, those that are selected to go are instead taken into a laboratory and cut up on the surgical table. One of the men at the facility, Richard, falls in love with one of the women, Lena. He begins to doubt what he is told after finding a can in the river. Driven by unanswered questions, he decides to break into the building where the people are readied to go to America. There he finds documents and videotapes that reveal that each of them is a clone of important people and they have been raised to provide spare body parts for them. Richard now breaks out of the Clonus facility and goes in search of his real-life donor.

Parts: The Clonus Horror is a fascinating little B-movie from the 1970s. It came at a time when cloning was just coming into fascination as a public topic. There were a number of other films around this time that took up cloning themes – The Resurrection of Zachary Wheeler (1971), which has a very similar plot to this, The Clones (1973), The Clone Master (1978), The Darker Side of Terror (1979), Anna to the Infinite Power (1982), Computercide (1982) and most, high-profile of them, The Boys from Brazil (1978). Certainly, of these, Parts: The Clonus Horror had the most ingenious approach. (For more detailed overview of the theme see Films About Cloning.).

Parts: The Clonus Horror works as one of the best of these because of the ingenuity of its set-up where the central mystery about where we are, who the clones are, why they are being lied to and then taken to be cut up is fascinating as you try to work out why things are happening. We see things thrown awry as Timothy Donnelly finds a can in the river, only to see this rejected as nothing by controller Dick Sargent and then Donnelly asking what Milwaukee is during the phone booth confessional to be told that it is a nonsense word and then that it is a rare metal. By this point, one’s intrigue is decidedly piqued. The eventual revelation of the scenario is one of the great conceptual surprise twists in science-fiction.

The greatest footnote that Parts: The Clonus Horror has in history is that it was the film that inspired Michael Bay’s The Island (2005). Bay blew the idea up into an action movie on an A-budget, called the mythical destination The Island instead of America but otherwise the two are essentially the same plot. The creators of Parts: The Clonus Horror thought so too and sued Bay and co, eventually reaching an out-of-court settlement.

Certainly, the basic premise makes much more sense as a low-key 1970s production where the hermetic world they are raised in consists of people wearing terrycloth, jogging shorts and Adidas sneakers. Stripped of Bay’s action overkill, this is a much more intelligent working out of the basic premise. Certainly, Parts: The Clonus Horror preserves the mystery and twist far better than The Island‘s publicity campaign did and, if one can watch it without foreknowledge, it works far better as a film. Both films still have some problems – like the logical question of why the facility would bother raising the clones to intelligence and educating them when their only purpose is essentially as spare body parts.

The film also has the conceptual problem of not quite knowing what to do with the story once the surprise is out of the bag (about the two-thirds point). Michael Bay solved it by turning everything into a big, loud chase film. Parts does eventually turn it all into a paranoid conspiracy film. This was the era of Watergate and government conspiracy and so it is no surprise that the film ends with a downbeat ending with the conspiracy eliminating almost everybody who has public knowledge.

The cast are generally okay, even if hero Timothy Donnelly is bland. The film does have a minor cameo from a handsomely assured and well-tanned Peter Graves as The President.

Parts: The Clonus Horror did not receive a high-profile release. In fact, it has gained more of a profile through its screening on Mystery Science Theater 3000 (1988-99, 2017-8) than it did in its original release, something that has served to give it an undeserved reputation as a bad movie. Director Robert Fiveson has never made another film, with the exception of several tv documentaries in the 2000s.