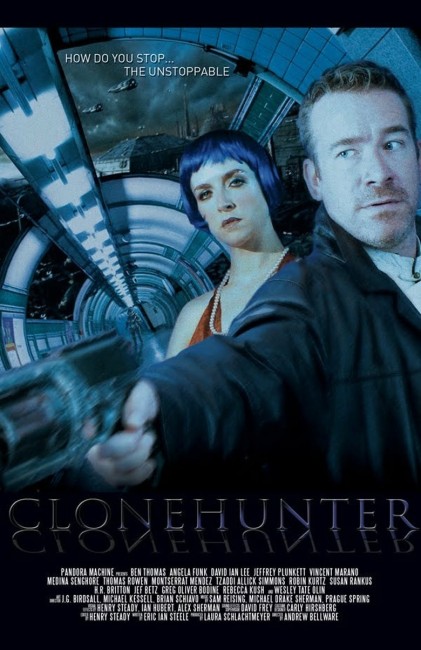 The bounty hunter Cain and his associate Rachel are summoned to the planet Terra 6. They are given an assignment by Simon Gulliver, the tycoon who runs the planet. He has had a series of sentient clone bodies built to transfer his mind into as his body he ages. However, one of the clones, Gulliver 9, has escaped and stolen the codes to the planetary defence grid and has announced that he will obliterate the entire planet if Gulliver does not hand over all his wealth. Cain and Rachel head down into the grimy underworld of the industrial complex in the bowels of the planet in search of Gulliver 9.

As Clonehunter opened, I was expecting no more than a standard B-budget science-fiction/action film. Instead, the film started to quietly impress with its creation of a future. The background has a dense sense of verisimilitude and feels like a lived-in world, filled with giant building-sized video ads for coats that protect against acid rain and such like. I particularly liked little throwaway touches in the opening scenes with Angela Funk trying to navigate her way through the planetary defence grid but not having the right codes, or the appearance of a holographic ship’s cat, which is also the avatar of the ship’s AI.

The plot proves to be another science-fictional neo-noir cobbling, which has always worked in good stead – see the obvious source of Blade Runner (1982). Despite a low budget, the film manages to deliver its plot in a consistently interesting and intelligent way, producing a number of wild left field twists and convolutions. As such, Clonehunter amounts to good science-fiction and Andrew Bellware generates it with an effectively gritty edge for the most part. Ben Thomas does okay in the grizzled bounty hunter role, although Angela Funk seems miscast as the tough female sidekick – where she should be radiating a toughness and cool, she seems outfitted more like a secretary or librarian.

Where Clonehunter falls down is in the cheapness of its effects. Certainly, I don’t want to come down on the filmmakers for trying hard and doing their best with not much of a budget. The shots from out of the bounty hunters’ ship as it passes through the buildings of the industrial complex look like the type of scenography that you get in a fly-about and shoot-’em-up videogame. Moreover, they are represented by the same computer-generated footage being used over and over with minimal variation. The film has been shot using digital backlot techniques – where the backgrounds of a scene have been optically inserted in post-production rather than any sets built. This works okay for the most part but the film falls down badly when Andrew Bellware tries to stage a flying motorcycle chase and the special effects are simply not up to the task.