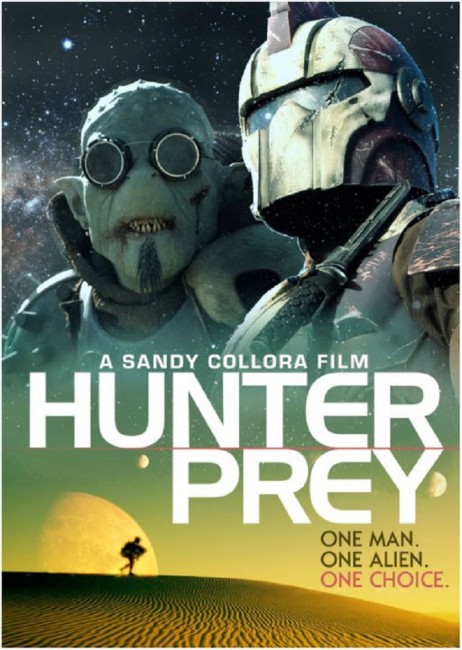 A spaceship crashes on a desert planet. The only survivors are the captain Centauri 7 and the military officer Commander Karza. The prisoner they were guarding has escaped and proves highly resourceful in fighting back and evading them. Karza is killed and Centauri 7 continues on his own. The object of the pursuit is Orin Jericho, the last human left alive in the universe. Throughout their flight and constant outwitting of the other, a slow respect grows between Jericho and Centauri 7.

Director/writer Sandy Collora comes from a background as a creature designer and concept artist at the Stan Winston Studios with credits on high-profile films such as The Abyss (1989), Predator 2 (1990), The Crow (1994) and Men in Black (1997), among others. Collora made his directorial debut with the feature-length angel film Archangel (2002) but the work he is most famous for is Batman: Dead End (2003), an eight-minute Batman fan film, and its sequel World’s Finest (2004), which teams up Batman and Superman.

Sandy Collora has made Hunter Prey on a next-to-minimal budget. The entire film is represented by only four characters on screen – well two principal characters and two minor ones – as well as the voice of A.I., which is played by none other than Erin Gray, who was Wilma Deering in the tv series Buck Rogers in the 24th Century (1979-81). The entire film has been shot outdoors – in the Baja Desert of California. There has been a reasonable amount of effort made to create the alien makeups and costumes but, beyond a few computer graphic point-of-view shots, the film is notedly lacking in hardware.

The sole visual effects we get are a planetaryscape from orbit at the start, one or two planets in the sky in the background and the uneven shot of a shuttle descending. That said, despite the evident conceptual economy, Sandy Collora does an impressive job. In particular, the desert scenes are strikingly shot with each of the camera positions beautifully chosen.

Hunter Prey starts out seeming like an alien bounty hunter scenario. Partway through, Clark Bartram removes his helmet and reveals that he is not an alien but a human. The revelation is momentously over-pumped by the music, nevertheless adds an intriguing tweak of expectation where the point-of-view aliens we have assumed to be the good guys are actually pursuing the character we should nominally be rooting for.

Thereafter, Hunter Prey reveals itself as an Enemy Mine (1985) scenario, a film about a human and alien enemy forced to co-exist on a hostile planet. (The Enemy Mine source is acknowledged where we get references made to the Dracs several times throughout). It should be noted that the basics of Enemy Mine were also borrowed around the same time with the equally modest but superior Enemy Mind (2010), which has a great many similarities to this, including even shooting in an area not too far away from the locations here.

Hunter Prey comes into its own in the latter half and the twists and turns as the two characters outmanoeuvre the other are effectively handled and both sides drawn with sympathy. It is perhaps here that the film’s conceptual economy starts to fall down where we rather absurdly have the destruction of an entire alien planet being counted down (or not) as the two characters sit on rocks in the middle of a gorge.