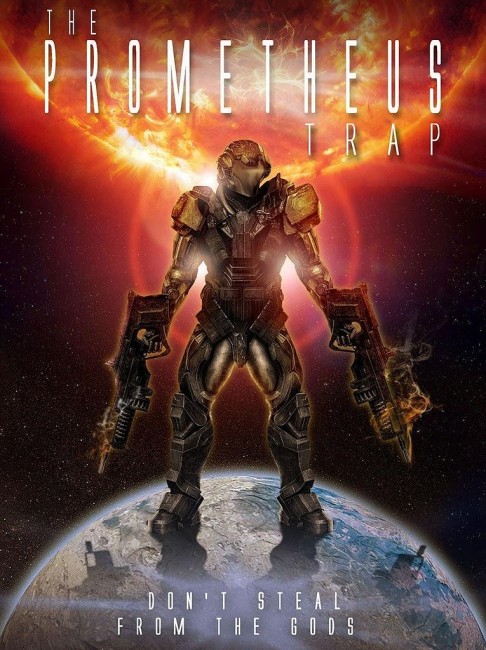 The two surviving crew members aboard the military vessel Venom under Captain Gloria Haskin are woken from cryo-sleep by the ship’s android Finn. They have been diverted from their mission to rendezvous with the abandoned ship The Prometheus, which carries The Hercules Mark VI, a powerful weapon that can erase an entire planet from the timeline. They board The Prometheus and revive the two remaining crewmembers and the ship’s android. However, it appears that one of them is a saboteur. As Finn tries to stop this person sabotaging the ship again, he realises that the Hercules Mark VI has been activated and the ship is caught in repeating the same loop of time over and over.

Andrew Bellware is a director whose work is under most people’s radar. Most of the films he makes are micro-budgeted and released to dvd. Beginning with his Shakespeare adaptation Hamlet, Prince of Denmark (1997), Bellware went onto a string of low-budget science-fiction and occasionally horror films that include Apostasy (1998), Millennium Crisis (2007), Alien Uprising (2008), Angry Planet (2008), Clonehunter (2009), Battle, New York, Day 2 (2011), Earthkiller (2011), Android Insurrection (2012), Robot Revolution (2015) and Carbon Copy (2017).

Prometheus Trap came out a few months after Ridley Scott made his Alien (1979) prequel Prometheus (2012). It takes no stretch of imagination given the similarity of titles to see Prometheus Trap as having been made as a mockbuster. There is an almost identical set-up to Alien of a ship’s crew being woken out of cryo-sleep to answer a distress call and entering a mysteriously abandoned ship. There is also an android among the ship’s complement, although here it becomes the main character of the story rather than a bad guy.

Prometheus Trap also gets full marks for actually winding the Greek myth of Prometheus – the god who was chained to a rock by Zeus as a punishment for stealing fire where his innards would be torn out by birds each day and regenerate by the next to be torn out all over again – and moreover to use it as an allegory for the timeloop.

The main problem with Prometheus Trap is that once the timeloop is introduced, all the film does is go through scenes of characters saying the same lines from different points-of-view. Usually these timeloop films have a great deal of fun showing the alternate possibilities the scenario can be put through but there are no interesting twists put on the premise other than that. There are some twists with the revelation of traitors in the crew and efforts made to prevent things from happening but these feel like aspects of plotting that needed far more substance than they receive.

The film is fairly cheaply shot. There are no credits for production designer, for instance, giving the impression the film has been shot using borrowed locations – at which it at least conducts a fair job of suggesting being on board a ship. The only time the budget becomes apparent is when it comes to the cryosleep chambers where the actors have simply been placed in what look like full-size ziplock bags with breathing tubes. There are some decent low-budget exterior shots of the two ships.