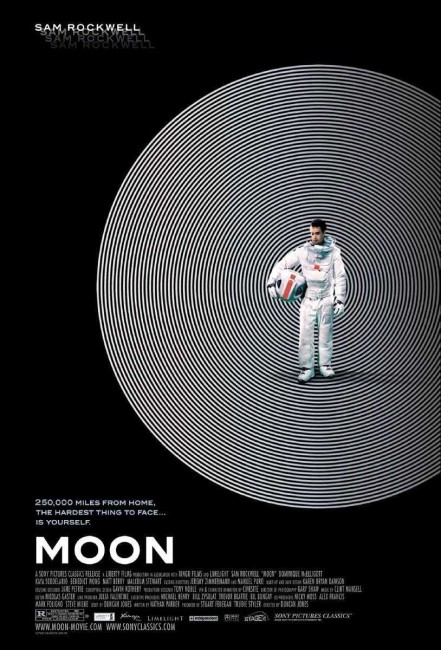 Sometime in the future. Sam Bell is nearing the end of a three-year contract to work on the Sarang mining base on The Moon. He is the sole person responsible for overseeing the automatic harvesters that mine the Helium 3 that has become an alternative fuel source for the Earth. With only the A.I. GERTY 3000 for company and occasional video messages from his wife Tess on Earth, Sam’s mind has slowly decayed with loneliness to the extent that he hallucinates people being there. While going out in a buggy to check on one of the mining vehicles, Sam thinks he sees someone outside and crashes. He comes around back at the base but GERTY will not allow him to go outside and Sam is forced to contrive an accident in order to do so. He heads to the crash site and is startled to find his own body inside the crashed moon buggy. He brings it back where GERTY nurses the other Sam to health. As the two of them puzzle over what has happened, they realize that they have been cloned, although do not know why. They realize that someone is fabricating the video messages from Tess and is deliberately keeping them from contact with Earth.

Moon is a science-fiction entry that came with a great deal of buzz. It proved to be a substantial festival hit around the world and there were even mutterings that Sam Rockwell’s duo of performances would be up for an Oscar nomination. There are some interesting names on the credits. Perhaps the most intriguing name is that of director Duncan Jones. Duncan Jones was in fact born with one of the wackiest names of any celebrity child (except perhaps Michael Jackson’s son Blanket) and up until now might have been better remembered as Zowie Bowie, the son of David Bowie. Duncan has made a career as a commercials director and Moon was his feature directorial debut. Perhaps owing to his celebrity contacts, Jones brings with him other interesting names like producer Trudie Styler, better known as the wife of Sting.

Duncan Jones cited his influence on Moon as being films like 2001: A Space Odyssey (1968), Silent Running (1972), Alien (1979) and Outland (1981), films that tell “human stories in future environments.” (It should be noted that most of these come from the era when David Bowie was also engaged in a number of conceptual experiments into science-fiction with albums like Space Oddity (1969), The Rise and Fall of Ziggy Stardust and the Spiders from Mars (1972) and Diamond Dogs (1974), as well as the film The Man Who Fell to Earth (1976) wherein he played an alienated alien). I think what Duncan Jones is trying to do is make a differentiation between science-fiction films that are set around hard credible science, extrapolative ideas and densely detailed, technology heavy futures, as opposed to science-fiction films of the 00s, which seem driven by massive CGI effects flourish and spectacle and/or creature effects.

Moon was made on only a modest $5 million budget. Duncan Jones was extremely creative with this – the entire film was condensed to one seemingly interlocked set built at Shepperton Studios and played out with only one actor. Jones also had the fortuitous advantage of shooting at the time when the US Writer’s Strike was in effect meaning that he was able to call upon top-notch soundstage resources and visual effects companies that were happy to take on a lesser-budgeted film at a point when they would otherwise have had to go on hiatus.

Both the low-tech look and minimalist structure of the film makes for a fine chamber drama – the entire film essentially plays out with one (you can debate whether it is one or two) characters and a machine that looks like a periscope control whose range of expression are limited to happy face icons. The special effects and models of the Moon’s surface are unobtrusively excellent – although, Moon is not a spectacle film that sets out to dazzle us but rather where the special effects are placed at the behest of story.

Duncan Jones pays clear homage to the hard science SF films of the 1970s. Kevin Spacey voices the A.I. GERTY and does his best to deliver it in the patiently silky tones of 2001‘s Douglas Rains. The Man Alone in Space story is strongly reminiscent of Bruce Dern’s loneliness in space with only the drones for company in Silent Running, while the double dilemma is somewhat evocative of Solaris (1972).

That said, Moon has a strong story of its own. The scene where Sam Rockwell seemingly wakes from the accident in sickbay, defies GERTY’s orders to keep him there and makes his way out to the crash site – only to find his own body inside the crashed buggy – holds a considerable surprise element to it. As the two clones sit in the confined space and puzzle over their existence, trying to find secret doors, work out whether the messages are real and so on, Moon seems to build towards a fascinating science-fiction puzzle box film. It seems to promise to be something akin to Cube (1997), Dark City (1998), The Truman Show (1998), The Matrix (1999) or The Sixth Sense (1999) and a host of M. Night Shyamalan films wherein the protagonist makes a startling conceptual breakthrough in understanding about their world.

While others rushed to call Moon a modern science-fiction classic, I draw a certain line at doing so. The main problem I have is that the film seems to be all build up but oddly missing a third act. There is a great deal of conceptual mystery created – why are there dozens of clones of Sam Rockwell beneath the base on The Moon? Who put them there? How come two clones were activated at once? Why does the company make so much effort to imprint them with memories of the original Sam and provide him with faked tapes of his family, yet keep communication with Earth blocked? It is a fine mystery but the payoff seems to oddly peter out.

The film ends with as many questions left unanswered and a host of vague inconsistencies. For instance, if the capacity existed to imprint each clone with memories, then the capacity also existed to imprint them with no or few memories, thus removing the need to create such an elaborate facade. (Despite what science-fiction seems to think, a clone does not come into being with the memories of its donor intact but with a blank mind that would be akin to a newborn child). If Sam is the only person on the base and in the near area then why build direct communication towers with Earth and then disable them – what purpose can they serve? Would the controllers not be more actively monitoring of what happens and take steps to prevent the clones from returning to Earth or making contact with Sam’s family?

The computer GERTY seems to behave in ways that do not make sense – it appears to be communicating live with Earth at one point, but nothing further is made of this, while its mandate to protect Sam Rockwell from knowledge is overridden with absurd ease. Duncan Jones seems to be trying to consciously evoke association with HAL and 2001, leaving one thinking that something sinister is about to happen with GERTY, but this never manifests.

Moon has one big twist surprise – about the revelation of the clone of Sam – but plays it too early into the show. Thereafter, the film circles around various questions about the scenario it has created but seems to only offer explanations that are vague or half-answered at best. What seems to be missing from this is a pullback near the climax that reveals the reasons for everything. The very nature of this type of story leads one to expect some big twist in the tale – maybe that everything is part of some experiment or that life on Earth had passed away and the cloning scheme was still continuing on automatic. The film never does and the ending when it comes, leaving so many questions hanging, invariably disappoints.

Nor does Duncan Jones push the double identity dilemma for as much drama and existential questioning as a film like this should – compare Moon to similar works like Solaris or even something as bewildering or disturbing as twin dramas like Dead Ringers (1988) and Gemini (1999). Nor for that matter does the Lunar environment seem that relevant to the story. The film makes very little use of it – we only ever get a single shot of Sam Rockwell walking in low gravity, while everything inside the base seems to happen in normal gravity.

Duncan Jones subsequently went onto make Source Code (2011) about a man being repeatedly transported into the same eight minutes in a parallel universe, the computer game adaptation Warcraft (2016) and the SF film Mute (2018), which Jones stated exists in the same universe as Moon.

(Nominee for Best Actor (Sam Rockwell) at this site’s Best of 2009 Awards).