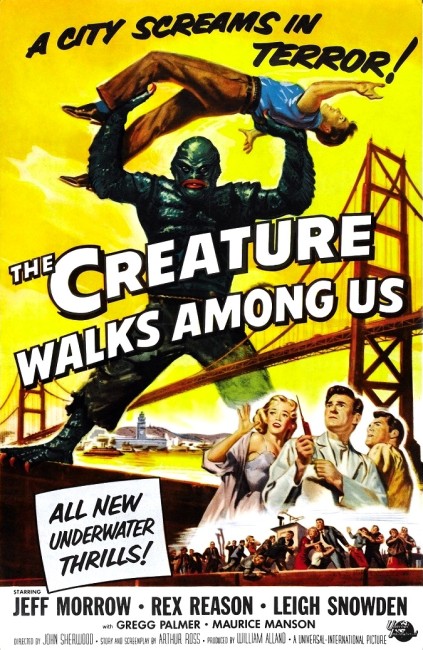 A group of scientists mount an expedition into the Florida Everglades in search of the Gill Man. They track it down and capture it but in doing so it is burnt by fire. In order to save it, they operate on its lungs, turning it from a water-breather into an air-breather. As they return to civilisation with it, the creature is bewildered by what it sees and haunted by what it remembers of the water, even though water is something that will now drown it.

This was the third of the Creature films begun with The Creature from the Black Lagoon (1954) and followed with Revenge of the Creature (1955). The Creature series was one where Universal gave the impression of trying to create another monster movie series a la their Frankenstein, Dracula, Mummy and Invisible Man films during the 1930s and 40s.

While usually regarded as the least of the series, The Creature Walks Among Us is actually quite a good film. What strikes one is its conceptual audacity. Rather than merely conducting another variation on the Creature menacing people all over again, it accepts the challenge of expanding the ideas of the original and taking them in intriguing new directions – here the idea of having the Creature captured and then undergoing an operation that turns it into a human.

This is a development that turns the Creature from a monster to a figure of sympathy. We get a genuine sense of a creature trying to comprehend the alien world that it suddenly finds itself in. There is a great deal of pathos created for it, with images of it longingly looking out across the water, wanting to follow its instinct to return but unable to do so. The makeup on the creature is a fine variation on the original.

John Sherwood is not up there with Jack Arnold, who directed the two previous entries. Nevertheless, Sherwood evokes a reasonable degree of atmosphere. The underwater diving scenes are well photographed. Sherwood borrows the classic scene from the original with Julia Adams swimming as the creature watches, in a scene with the creature watching Leigh Snowden scuba diving. Like Arnold, Sherwood is aware of the inherent eroticism of the scene and conducts a momentarily quite lovely image of Leigh Snowden gracefully twirling as she is caressed by a vortex of air bubbles. There is also a good scene with Rex Reason diving to save the drowning creature as it returns to the water and rising to the surface, buddying up with it on an airtank.

Like most science-fiction films from the 50s, The Creature Walks Among Us has an interesting subtext. The creature’s transformation from animal to human is written against a backdrop of a failing marriage and husband Jeff Morrow’s possessive jealousy over wife Leigh Snowden’s dalliance with other men. The part feels like something personal on the writer’s part and tends to bend the film out of shape somewhat. Nevertheless, it makes for an intriguing message where the creature’s dual natures symbolically represents humanity’s chance to either rise above or sink into base nature: “We all stand between the jungle and the stars at a crossroads,” says Reason, “I think we better discover what brings out the best in humankind and what brings out the worst because it’s the stars or the jungle.”

At the end of the film, someone comments “We’re not so far from the jungle” and Rex Reason sums it up: “We’re not so far from the stars either. And I guess how far we’re prepared to go is how much we’re prepared to learn about ourselves.” There are few speeches that seem to sum up the essential quandary of 1950s science-fiction, between the feeling we can conquer the stars and that we are about to destroy ourselves in an atomic holocaust, than this.

John Sherwood was more prolifically employed as an assistant director. He only made three films as director, beginning with the Western Raw Edge (1956), followed by The Creature Walks Among Us and the also worthwhile The Monolith Monsters (1957) from a story by Jack Arnold.