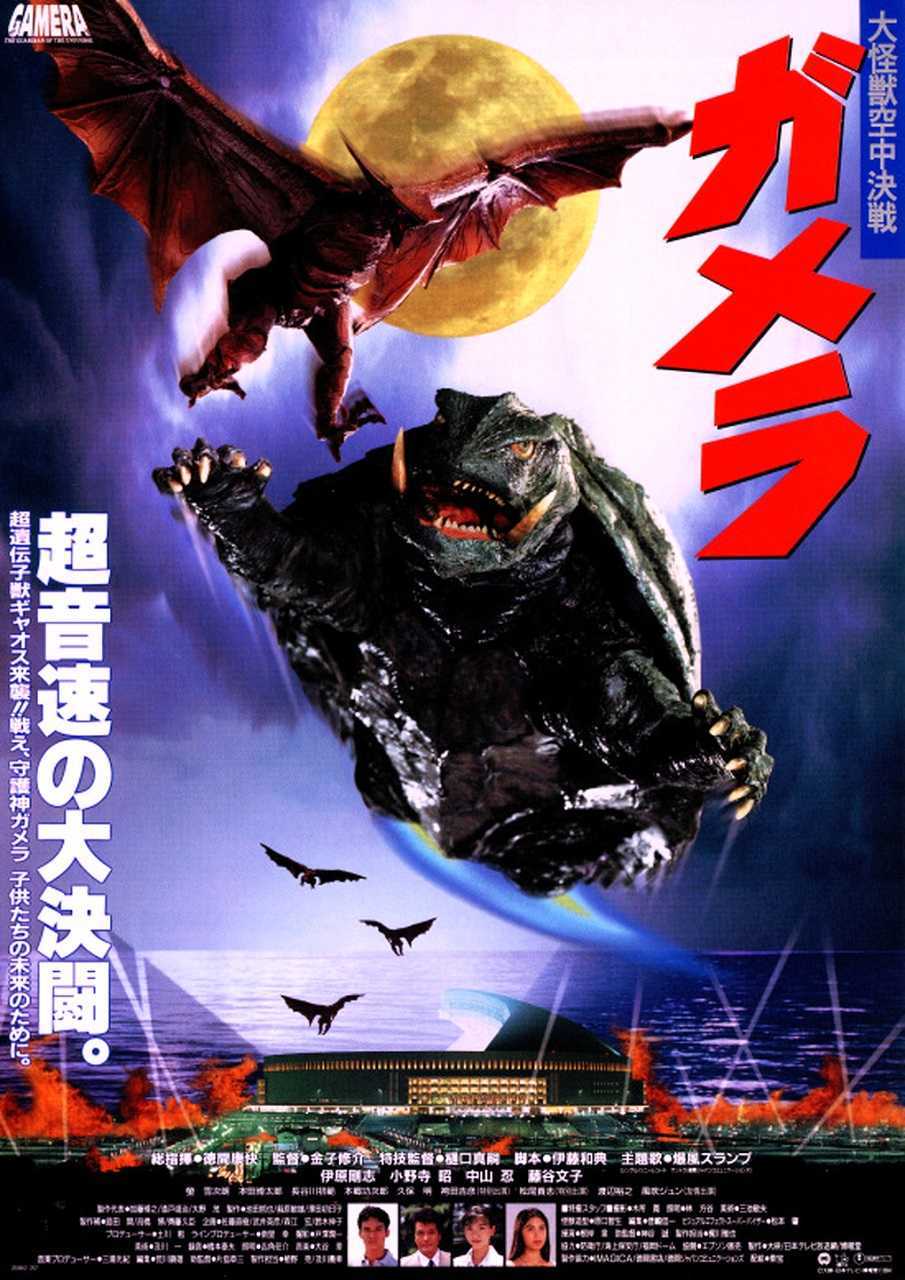 A moving atoll appears at sea on the site where radioactive waste is about to be dumped. Nearby Himegami Island is suddenly attacked by large reptilian birds. Attempts are made to capture these but then a giant-sized turtle appears out of the sea and takes on the birds. An ancient plaque is found on the atoll and when translated reveals the creatures were created by an ancient civilisation, the birds being the Gyaos and the turtle Gamera. As the military hunt both down, schoolgirl Asagi Kusanago develops an empathic link with Gamera, being hurt whenever it is. She realises that Gamera has been created to destroy the Gyaos who are causing devastation in order to bring the world back to the polluted state they are used to living in.

Created by Daiei Studios, Gamera was always a lesser cousin of rival studio Toho’s more popular Godzilla. The first Gamera film Gammera the Invincible (1965) was one of a host of other giant monster movies copying Godzilla, King of the Monsters (1954). Gamera then fought through several sequels (see below for other titles), which also mimicked the path taken by Toho’s Godzilla films in turning Gamera into a defender of Japan and pitting it up against other monsters and alien invaders. After one mediocre revival a decade later with Gamera Super Monster (1980), Gamera then languished forgotten.

Since his breakthrough with Gamera, The Guardian of the Universe, Shusuke Kaneko emerged as a master of effects spectacle (although appears to have drifted away from about the mid-2000s). Guardian of the Universe suffers from some occasionally spotty effects – the creatures are glassy-eyed and not always very expressive, the missiles are clearly animated. [All of this would improve markedly by the time of Kaneko’s awe-inspiring Gamera 3: Revenge of Iris (1999)]. The film however is superbly staged. For the first half-hour, the monsters are only briefly glimpsed – but then the film erupts in an enthrallingly staged shootout with the Gyaos birds trapped inside a stadium and then the appearance of Gamera, spectacularly rising up out of the harbour.

Despite the somewhat immobile creatures, there is nothing wrong with the models and pyrotechnics when it comes to Kaneko’s superb slambang climax. There is all the usual mass destruction here – laser beams sawing through entire buildings, Gyaos rising up and flapping its wings and causing vast tornadoes, colossal explosions, shots from interiors of offices as the building is collapsing – and Shusuke Kaneko conducts it with mesmerising regard. Sometimes the images Kaneko creates go beyond being mere model shots and have an enormous beauty – like the shot of Gamera perched on a toppled tower as the sun sets over Tokyo.

The plot alas is a silly affair that shuffles around many of the themes and cliches familiar to the Japanese monster movie – Atlantis/Mu, mysterious artifacts made of unknown metals, teenage girls with empathic connections to the monster, and the old 1970s chestnut of the monster being created by pollution – here the evil Gyaos went into hibernation and was not resurrected until conditions in the world (acid rain, radioactive waste being dumped at sea) returned to the state it was most used to. The English language dubbing is surprisingly good. The actress playing the empathic schoolgirl is Steven Seagal’s daughter Ayako Fujitani.