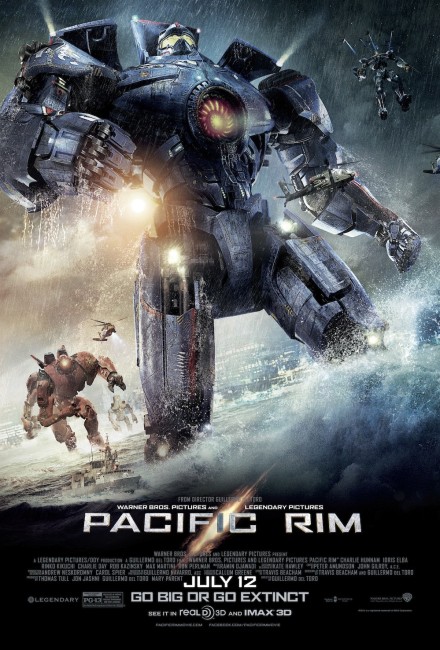 The year 2020. Earth has been attacked by giant monsters known as Kaiju that have emerged through an inter-dimensional breach at the bottom of the Pacific Ocean. Humanity’s only defence has been to build Jaeger, giant robots that are able to take the Kaiju on in hand-to-hand combat. Each Jaeger is piloted by two humans that are mentally linked together in a neural bridge where they share thoughts, allowing them to control the actions of the machine. However, the Jaeger program is shut down by the governments of the world despite being the only effective defence against the Kaiju. In 2025, Raleigh Bracket, a Jaeger pilot whose co-pilot brother was killed in action, is now working construction on a giant wall being built against the Kaiju when he is recruited to come back into action by Marshal Stacker Pentecost. Even though the governments have discontinued the use of the Jaegers, Pentecost knows the walls are useless and so has set up a rogue base in Hong Kong using the remaining Jaeger. Raleigh is reluctantly persuaded to go back into action, being paired up with the bright novice co-pilot Mako Mori. This time Pentecost has the ambitious idea of using one of the Jaeger to physically enter the breach and detonate a nuclear weapon to close it. At the same time, the Kaiju attacks are starting to escalate in number.

Pacific Rim is a film that gives the impression it has been conceived after a week-long hyper-caffeinated, sleep-deprived marathon of anime and Japanese fantastic cinema. It feels as though it has distilled for Western audiences Japanese fantasy’s twin obsession with giant monsters movies and its long history of anime tv series and occasional films that involve human-piloted giant robots. The Japanese monster movie goes all the way back to Godzilla (1954), which has spawned twenty-seven sequels and numerous copycats, spinoffs and copies from rival companies. This is made explicit here where the monsters are referred to as Kaiju, the name given to the genre of giant monster movies that Godzilla spawned.

The giant robot anime goes all the way back in anime to the 1960s and the tv series Gigantor (1963-6). There have been a plethora of other such shows with the likes of Mazinger Z (1972-4), Mobile Suit Gundam (1979-80), Super Dimension Fortress Macross/Robotech (1982-3), Mobile Police Patlabor (1989-90), Neon Genesis Evangelion (1995-6), Escaflowne (1996) and films like Appleseed (1985), Appleseed (2004) and Planzet (2010), among numerous others. However, to call the genre one about giant robots is not strictly correct. Robots are usually taken to be ambulatory mechanical creations capable of autonomy and complex thought of varying degrees. The idea of the human-piloted giant robot is not a robot per se and has been termed the mecha to differentiate.

There have been various live-action ventures into the mecha genre, in particular with the Japanese Gunhed (1989), Stuart Gordon’s Robot Jox (1990) and Robot Wars (1993), while mecha turn up in the background of other films like The Matrix Revolutions (2003), District 9 (2009) and Sucker Punch (2011) and most famously the Walkers in The Empire Strikes Back (1980). There have even been live-action mecha vs giant monster films before from Japan with Godzilla vs Mechagodzilla (1993) and Godzilla Against Mechagodzilla (2002).

Pacific Rim is of course a big-budget production for Guillermo Del Toro. Born in Mexico, Del Toro emerged onto the world stage with the festival/arthouse hit of Cronos (1993), which led to other films varying between English and Spanish language with the likes of Mimic (1997) and The Devil’s Backbone (2001), before the US mainstream breakthrough of Blade II (2002). This was followed by works such as Hellboy (2004), the enormously acclaimed Pan’s Labyrinth (2006) and Hellboy II: The Golden Army (2008). Subsequent to Pacific Rim, he went on to make the ghost story Crimson Peak (2015) and the amphibian man romance The Shape of Water (2017), which won Del Toro an Academy Award as Best Director, and the fake clairvoyant film Nightmare Alley (2021).

Guillermo Del Toro made a welcome return with Pacific Rim. It is a film that has been designed with very simplistic appeals – the adolescent one of seeing giant robots and monsters in hand-to-hand combat and the attendant pleasures of mass destruction. On screen, Pacific Rim is exactly what you expect it to be from the promotion and publicity. You might, for instance, compare it to Michael Bay’s Transformers (2007) and sequels Transformers: Revenge of the Fallen (2009), Transformers: Dark of the Moon (2011), Transformers: Age of Extinction (2014) and Transformers: The Last Knight (2017). There is no real difference in the pitch between the two films – both are adolescent fantasies of seeing giant machines beating the crap out of one another and the attendant orgy of mass destruction that has been put on for us by the top effects houses in the world.

Neither the Transformers films or Pacific Rim are terribly sophisticated in terms of its story – Pacific Rim does take the time to detail the background of the world where the action is taking place but you keep wanting to ask more about this future. The film has, for example, omitted any mention of the mass casualties that would have no doubt occurred from so many rampaging monsters, not to mention giant mecha, who are seen trampling central city areas. Or even for that matter what the population or insurance industry would do to prevent repeats of such mass destruction to property – the Evangelion films had the natural solution where all the cities were built underground and rose up into the daylight on elevators when the coast was clear of attack.

Some of the aspects of the story – about the process of two people linking minds and sharing thoughts have a sketchy minimalism in their use and you wish more time had been spent in exploring what such entails and its potential complications. The actual story trades in fairly stock tropes – the hero overcoming feelings of loss to enter the fray again; the highly skilled but untested rookie; the last minute miracle solution; the heroic climactic sacrifice to stop the monsters.

Of course, beyond similarity of plot, there is a world of difference between the Transformers films and Pacific Rim. Where Michael Bay is a flag-waving patriot who takes all the “America is the greatest country on Earth” stuff seriously, Del Toro’s heroes are a deliberately international mix (even if some of the affected Australian accents conducted by non-Australians end up making you wince) and the focus is less on macho heroism than it is on mutual cooperation. Where Bay’s films are filled with a perpetual adolescence, peopled with supermodels and guys leering at them with jaws on the floor, or a fascination with fast cars and cocky comeuppance, Pacific Rim could be considered a film about the soul of the robot jock where Guillermo Del Toro’s focus is less on the perpetual orgy of mass destruction than it is on the heroism, loss and rediscovery of what it takes to get inside the machine. Again not something that strays too far beyond the confines of standard characterisation but enough to make a noticeable difference in two films where the focus is otherwise the adolescent pleasures of big toys and blowing things up.

Certainly, you cannot deny that Industrial Light and Magic and other assorted companies put on a spectacular show. There are some amazing set-pieces with Kaiju and Jaeger battling one another while standing in mid-ocean or the massive set-piece where Charlie Hunnam and Rinko Kikuchi take on one Kaiju in downtown Hong Kong, wrecking much of the city (in the tradition of just about every Japanese monster movie). The special effects, the design work and seamless blend of live-action and CGI/animation is astonishingly accomplished and staged by Del Toro in a way that is constantly awing at the scale of the action – lovely little touches like the way the fishing vessel is picked up and lifted out of the combat zone in the opening combat scene. It puts to shame almost anything seen in the recent Man of Steel (2013) and its tedium-inducing orgy of mass destruction that was allowed to go on for far too long. By comparison to both the Transformers films and Man of Steel, Guillermo Del Toro is sparing when it comes to the mass destruction, carefully balancing this out with human scenes.

Among the human actors, the headline name of the show is Idris Elba. Elba is a British actor (who is frequently mistaken for African-American apparently) who has done some excellent tv – Ultraviolet (1998), The Wire (2002-8) and Luther (2010– ) – but has eluded success on the cinema screens. It would be nice if Pacific Rim was the success that propelled him to the stardom he is clearly deservous of. As the military officer with tightly bound emotions but a strong sense of honour, Elba shines here and gets some of the best writing. Charlie Hunnam ends up quieter but is passable, although Rinko Kikuchi, largely known for Babel (2006), upstages him with a fierce determination.

On the minus side is Charlie Day and Burn Gorman, cast as scientists whose anti-social quirks and nerdiness are played up to the level of cartoonish caricatures. Ron Perlman, who has appeared in every Guillermo Del Toro film to date, ends up stealing the show whenever he turns up as an entertainingly gregarious underworld figure (where he gets one of the most entertaining famous last words despatches one has seen in some time – not to mention a fantastic comeback line).

A sequel was long announced and eventually emerged as Pacific Rim: Uprising (2018) with Guillermo Del Toro producing and Idris Elba not returning but John Boyega playing the role of his son.

(Nominee for Best Actor (Idris Elba) and Best Special Effects at this site’s Best of 2013 Awards).