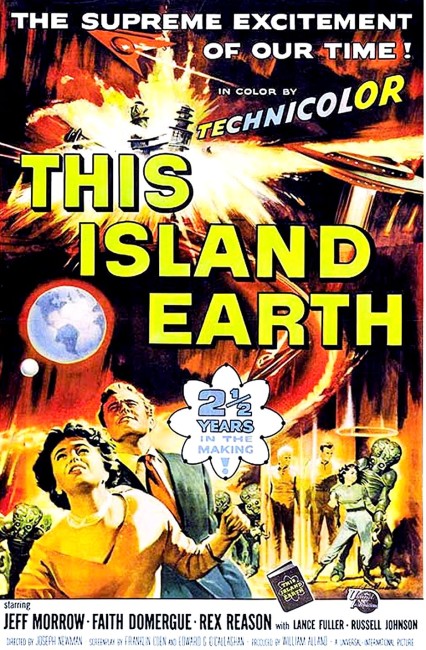 Dr Cal Meachem receives a catalogue that contains order forms detailing highly-advanced electronic parts unavailable by current technology. Intrigued, Meachem orders some of these and receives back a device, which he then constructs. This proves to be an Interociter, a communications device. Exeter, a strange high-foreheaded man, appears on the device, inviting Meachem to become a member of a scientific enclave dedicated to world peace. After joining the enclave, Meachem and colleague Dr Ruth Adams then discover that the high-foreheaded people are in fact from the planet Metaluna and have come to tap Earth’s resources in their devastating war against the Zahgon. When their discovery becomes known, Exeter abducts Meachem and Adams and takes them back to Metaluna.

This Island Earth is a classic film from the great 1950s Golden Age of Science-Fiction Cinema. Destination Moon (1950), the film that started the so-called Golden Age off, had an extraordinary boldness in its promise of the ability of humanity to conquer space. However, subsequent to that the science-fiction films of the era suffered from a troubling timidity of spirit and rarely ever managed to muster such conceptual courage. Rather the tone of outward-venturing that Destination Moon had heralded was eclipsed by fear of the rest of the universe. Very soon any venturing forth from the here and now was overrun by alien invaders and atomic monsters. This Island Earth is one of the rare ventures forward into outer space. It is one of the most colourful science-fiction spectacles to come out of the period.

Today, This Island Earth disappoints somewhat – many people who come to it having heard of its classic reputation do not take the time to persevere through the slow lead-up of the story. The film takes nearly two-thirds of the running time before it gets us to the space scenes. The dramatics in these early scenes are pedestrian and hampered by a wooden leading man and woman.

Certainly, in this latter third, the spectacle has an extravagant splendour as we journey beneath the surface of a planet pitted by meteorite attacks, through a vast crumbling underground city and encounter such wonderful super-science devices as a radiation cylinder that reduces people to coloured skeletons, not to mention the brief appearance of an insectoid mutant that has become a classic creature among fans of 1950s science-fiction.

Ultimately, even in terms of the conceptual reach of fifties science-fiction, This Island Earth suffers from a timidity of spirit. The ghosts of WWII and the atomic bomb that haunted the rest of 1950s science-fiction still linger. As with other space travel films of the era like Rocketship X-M (1950), Forbidden Planet (1956), First Spaceship on Venus (1959) and time travel ventures such as Captive Women (1952), World Without End (1955), Beyond the Time Barrier (1960) and The Time Machine (1960), the boldness of the journey is undercut by the overriding message the film wants to make once it gets to the other world.

1950s filmmakers did not seem able to advance beyond the fear of impending atomic annihilation and invariably even superior civilisations ended up destroying themselves with (nuclear) war. The beauty of its ravaged world and the journey aside, on a level of courage of imagination, This Island Earth only undertakes a journey there where we can be shocked at the ruined world and then turns around again and comes back again.

This Island Earth is one of the few 1950s science-fiction films not to have been remade in the 1980s, although the film itself was used as the basis of Mystery Science Theater 3000: The Movie (1996) wherein in it was held up to ridicule and a laugh track dubbed over it. The mutant did turn up as a musician in the background of the cantina in Star Wars (1977), makes a cameo in Looney Tunes: Back in Action (2003) and even appears as a wedding minister in The Haunted World of El Superbeasto (2009).