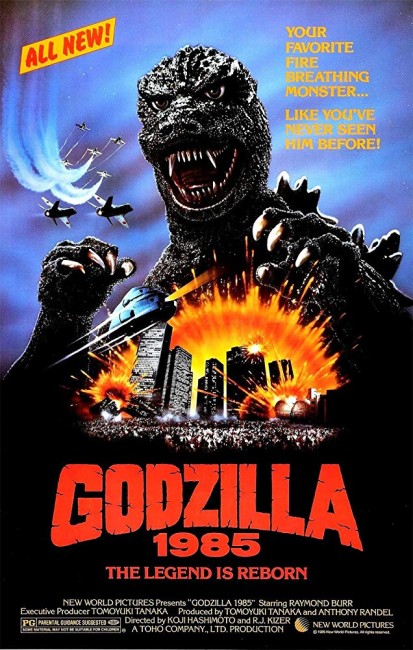 There is a series of attacks on shipping. This proves to be being caused by Godzilla who has reappeared again after thirty years. Godzilla marches towards Tokyo, proving invincible to every weapon brought against it. The Japanese are caught in the midst as political tensions mount between the Russians and Americans who both want to use nuclear weapons to stop Godzilla.

The very first Godzilla film, Godzilla, King of the Monsters (1954), was a remarkable film, one where the monster represented a single howl of national pain trying to express the horror of Hiroshima and Nagasaki. Since then more than twenty-eight other Godzilla films have been made. However, the initial metaphor of pain soon mellowed and not long into the series Godzilla became something akin to a superhero defending Japan against various other outlandish monsters. From the late 1960s onwards, the Godzilla series headed in increasingly juvenile directions and eventually no longer took itself seriously. The classic Godzilla series came to an end with Ishiro Honda’s at least halfway decent Terror of Mechagodzilla (1976).

In 1984, a time also when there was a fad in the US for remaking 1950s science-fiction films, Toho went back and revisited Godzilla with Godzilla 1985 (simply called Godzilla in Japan). Godzilla 1985 was the first Godzilla film from Toho after nearly a decade’s silence. While announced as a remake, Godzilla 1985 clearly bypasses all the Godzilla vs the Sea –, Smog – and Cosmic Monster sequels and acts as a direct sequel to the original, pretending that all the others in between never happened. It abandons the idea of the monster as cartoonish national avenger engaging in tag-team wrestling matches and returns to the ferocity with which Godzilla emerged from the waters back in 1954. (These days it is something that would be called a reboot).

The new Godzilla has been revamped with narrower eyes and a mouth like a tyrannosaurus and comes venting a genuine fury – there is nothing cutsie about this Godzilla film at all. Toho have gone all out – the effects and model work are top class, with Godzilla being partially represented by a mechanical mockup rather than the usual man in a monster suit. The massive scenes of destruction are intensely exciting, the highlight of which is a showdown between the Super-X fighter and Godzilla, exchanging ray blasts and radioactive breath at one another through holes blasted through skyscrapers. Godzilla’s size is occasionally variable – he is said to be 80 feet tall but is also shown as being the same height as fifty story skyscrapers.

The metaphor has been updated too, thrusting Godzilla into the era of NATO and coming to represent the anxieties of a Japan caught between the heightened East-West tensions of the Reagan era, as well as the odd side message about the environmental dangers of nuclear power plants. In one haunting metaphor, Godzilla is called an eco-warrior, seen as a living nuclear weapon, indestructible and destined to walk the Earth forever.

For once, the US version of the film has been mounted with considerable care, with new scenes directed by New World Pictures editor R.J. Kizer, later co-director of the hilarious Hell Comes to Frogtown (1987). Raymond Burr has even been brought back to frame the English-language scenes, as in the original, although the character is pointedly now just ‘Mr Martin’ … missing his Christian name ‘Steve’. A superlative job has been conducted on the dubbing – few other films when dubbing a film into English would take the care to dub the scenes with the Russians into Russian and offer English subtitles.