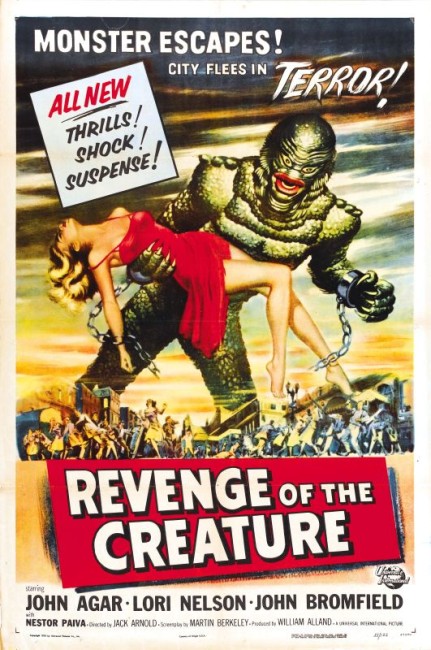 A second expedition up the Amazon captures the Gill Man. They return to Ocean Harbor oceanarium in Florida where the Gill Man is made into the star exhibit. There Professor Clete Ferguson and ichthyologist Helen Dobson determine to tame it. The Gill Man fixates on Helen. It then makes an escape and comes after her.

Revenge of the Creature was the second in the trilogy of films begun with The Creature from the Black Lagoon (1954). The Creature trilogy is unique among film series, especially monster movie series, in that each successive entry expanded on the basic idea as opposed to repeating the formula of the original. The Creature from the Black Lagoon was a simple but effective monster movie about scientists entering a jungle lagoon where they are stalked by a monster; this entry expands the idea by having them bring the creature back to civilisation – where it promptly escapes and goes amok; while the third entry The Creature Walks Among Us (1956) went into conceptually audacious areas, featuring scientists trying to surgically alter the creature into an air-breathing mammal.

Although highly regarded by many genre fans, Revenge of the Creature is the least interesting of the trilogy thematically. Certainly, director Jack Arnold does a customarily good job. He effectively generates pathos for the creature as it is chained up, starved and tortured with a cattleprod, or images of it standing by the pool window and looking out at Lori Nelson. Like the original film, Revenge of the Creature was shot in 3D and we get scenes of Gill Man swimming at the camera, prods emerging out the screen and the like.

In The Creature from the Black Lagoon , Jack Arnold created a memorable scene shot from underwater of the Gill Man following Julia Adams from beneath as she swims above. He creates a similar scene here of the Gill Man lurking inches below Lori Nelson as she swims with John Agar, it mirroring her moves and then reaching up to touch her foot. The original scene added a suggestion of eroticism to the relation between creature and woman.

Here Jack Arnold expands the underlying eroticism out to crudely turn the Creature into some sort of horndog reptilian stalker – it follows Lori Nelson as she goes out on a boat, spies on her undressing to take a shower, emerges from the water with symbolic event just as she and John Agar kiss, breaks up a dance to abduct her. In fact, it is hard not to see the Creature as a variant on one of the bad teens that inhabited Jack Arnold’s later camp classic High School Confidential (1958). It is the relatively crudity of these themes that make Revenge of the Creature a more routine monster movie, lacking in any of the rich subtext that the other films in the trilogy, and indeed the rest of Jack Arnold’s work, does.

One notable aspect of Jack Arnold’s films would seem to be an uncommon sympathy toward what at that point in time had not even been defined as feminist issues. This emerges particularly strongly in his The Incredible Shrinking Man (1957). Here Arnold demonstrates some sympathy for Lori Nelson’s difficulty in pursuing her desired career and the pressure she is under to conform to the 1950s ideal of marriage and home-making. She is clearly seen as confused when it comes to leading non-traditional life pathways of wanting a career (something that was not exactly encouraged among women in the 1950s). “Where will it lead me?” she wonders to John Agar (of her career). “Most of the kids I went to undergraduate school with are all married and have children.” And then “[I] just don’t know [what I want].” The end has her going off with John Agar presumably to marry, although whether she will still be allowed to pursue her career is left unstated.

The one other aspect Revenge of the Creature is famous for is being the first screen appearance of Clint Eastwood. Eastwood has a brief comic relief part as a lab technician who thinks he has misplaced a lab mouse only to find he has put it in is pocket, a part where Eastwood seems awkward and embarrassed.