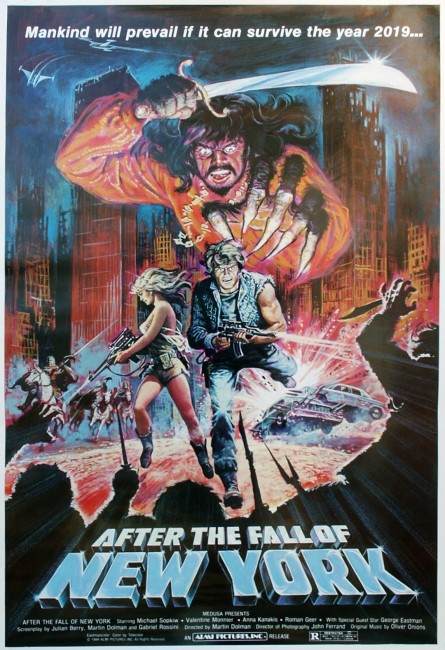 It is twenty years after the nuclear holocaust where the survivors have mutated and become infertile. The nomadic warrior Parsifal is abducted by the Pan American Confederacy. It is explained that they are planning to launch a spaceship to relocate the survivors to Alpha Centauri. He is offered a place on the ship if he will go into the ruins of New York City and rescue the only fertile woman left. Parsifal agrees and sets out, accompanied by two others. They venture into New York, which is controlled by the soldiery of the Euracs. Moving through the city and avoiding Eurac pursuit means Parsifal allying with the mutant peoples that live in the ruins.

The Italian exploitation industry of the 1960s, 70s and 80s is worthy of several entire books studying it. Whether it was Westerns, spy films, crime films, action films, psycho-thrillers, science-fiction, killer shark films or post-holocaust films, nobody seemed to rip off popular US film fads with such entertainingly cheesy vigour as the Italians did. 2019:

2019: After the Fall of New York is one of the more enjoyable Italian Mad Max ripoffs. In actuality, just as much as Mad Max 2, it is also ripping off of Escape of New York (1981) and its plot of an anti-hero tasked with venturing into the ruins of New York on a mission and having to fight the crazies and ruling warlords there. Escape from New York had also spawned the basics of another Italian copycat the year before – 1990: The Bronx Warriors (1982), which had led to a sequel Bronx Warriors 2 (1983). (There is even a tatty electronic score that tries to copy John Carpenter’s work for Escape).

After the Fall of New York certainly has a more vigorous employment of science-fictional tropes than all of the other Italian post-holocaust films – future national rivalries, cryogenics, cyborg spies, totalitarian states and troopers wielding rayguns (basically allowing it to shove every trope from the Italian sf film of the 1980s it can into the film). Moreover, the film does the quest for the last fertile person that has been a theme of a number of films subsequently – see Hell Comes to Frogtown (1987) and American Cyborg: Steel Warrior (1992), even the respectable Children of Men (2006).

The action scenes are ridiculously entertaining – and without the basic concerns for believability that most Italian action films of the period had. There is a demolition derby in the desert early on where the vehicles seem built with the most absurd and improbable of attachments like giant shields on the side and random spikes. Or the ridiculous chase through the tunnel at the climax of the film that involves a series of improbable car stunts and moves like where George Eastman manages to throw a sword that decapitates three heads in a single tossed arc.

There are even times where Sergio Martino seems to do something that seems on the verge of actual style – like a beautiful tour around the model ruins of New York in the opening shots as one of the survivors plays trumpet. I mean what other Italian exploitation film can you say features a copy of Picasso’s Guernica (1937) in the background? – and discussion of it.

Sergio Martino was a veteran director in numerous genres of the Italian exploitation industry. He also made the genre likes of:- the giallo Blade of the Ripper (1971), They’re Coming to Get You (1972) about Satanists, the giallo Torso/The Body Bears Traces of Carnal Violence (1973), the cannibal film Slave of the Cannibal God/Prisoner of the Cannibal God (1978), The Great Alligator (1980), Isle of the Fishmen/Screamers (1981), the occult film Murder in the Etruscan Cemetary (1982) and the giallo Mozart is a Murderer (1999), as well as wrote Devilfish/Devouring Waves/Monster Shark/Red Ocean (1984); the killer cyborg film Hands of Steel (1986); and the action/psycho/fantasy film American Rickshaw (1989).