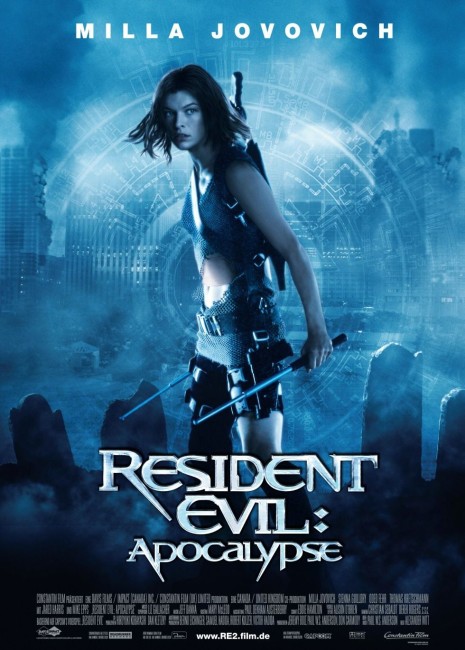 The T-Virus has escaped from The Hive and travels above ground where it rapidly infects Raccoon City, turning people into flesh-eating zombies. The Umbrella Corporation’s Major Cain takes the ruthless step of sealing off all exits from the city, trapping the remaining people inside with the infected. Meanwhile, Alice wakes up in hospital and walks out into the city to find herself in the middle of a frenzied battle between humans and zombies. She teams up with a handful of survivors to find a way out of the city. They are contacted by Dr Charles Ashford, the creator of the T-Virus, who tells them he will show them the way out if they will rescue his daughter Angela, who is trapped at the school. Meanwhile, Cain has taken the step of setting Nemesis, a near-invincible and massively armed experimental genetic creation, loose inside the city to see what it is capable of doing.

Not many people liked Resident Evil (2002), the film based on Capcom’s massively popular series of ‘survival horror’ computer games, but it was a reasonable success. Director Paul W.S. Anderson and the game’s creators drew upon the influence of the George A. Romero’s zombie films – in particular Dawn of the Dead (1978). Unfortunately, both the Romero influence and the game’s splattery ultra-violence were watered down to a tepid level on screen, while Paul Anderson’s attempts to recreate game-styled action sequences proved eminently forgettable.

Resident Evil: Apocalypse is a sequel to Resident Evil. Milla Jovovich returns as Alice, however Paul Anderson departed to make AVP: Alien vs. Predator (2004), although does write the script and produce. Direction of the sequel was handed over to Alexander Witt. Alexander Witt is better known as a second unit director and has worked on a number of A-list films including Speed (1994), Twister (1996), Gladiator (2000), Black Hawk Down (2001), The Bourne Identity (2002), xXx (2002), The Italian Job (2003), Pirates of the Caribbean: Curse of the Black Pearl (2003), Casino Royale (2006) and Robin Hood (2010). Resident Evil: Apocalypse was the first time that Witt has stepped up to direct the primary unit.

I must admit that on the basis of Resident Evil, I was not expecting much of Resident Evil: Apocalypse but ended up being pleasantly surprised. In terms of all the things that the films try to do – provide kinetic action sequences and gut-crunching zombie action – Apocalypse is far more satisfying than Resident Evil was. Apocalypse satisfyingly captures something of a George Romero zombie film – the various shootouts and fights with the zombies have an intensity that favourably recalls something of Dawn of the Dead, while Alexander Witt is far more willing than Paul Anderson was to push the envelope in terms of gore, even if the film ultimately never challenges its R rating much.

Witt sets up some spectacular action sequences – Oded Fehr jumping out of a helicopter on a bungy to save a woman on a rooftop from zombies; Milla Jovovich abseiling down the sheer glass face of a skyscraper; a sequence somewhat borrowed from Jovovich’s former husband Luc Besson’s The Professional/Leon (1994) with Milla diving down a waste chute and hiding in an overturned metal hamper to avoid a rocket fired at her. The film’s best scenes involve the Nemesis – a naff looking creature that resembles a cast-off Cenobite – but with which Alexander Witt crafts some spectacular sequences as it effortlessly mows down police and relentlessly pursues Milla.

On the other hand, at the same time as you admit the spectacular nature of some of Alexander Witt’s action sequences, you are also forced to admit just how posed and silly some of them are – Milla Jovovich’s entrance improbably bursting through the stained glass window of a church on a motorcycle; another scene where she appears out of nowhere to toss a cigarette and ignite an explosion and then turns around whipping up a fireproof cape to shield herself and two others from the ensuing ball of flame; even the notion that a helicopter a matter of city blocks away from the epicentre of a nuclear explosion is going to merely be buffeted about like it were going through a few bad air pockets instead of incinerated like a napkin in a furnace.

The weakness of Resident Evil: Apocalypse is Paul Anderson’s script. Paul Anderson is a director of variable strengths but has proven far less effective when it comes to writing his own material. As was the case in his other scripts, the first Resident Evil and Alien vs. Predator, the characters here have zero depths, there is nothing to them beyond their names and job description. The scenes near the end where the various tv broadcasts try to whitewash over the zombie outbreak and a nuclear explosion are so unconvincingly presented that the audience ends up laughing.

The worst part is the ending. Here [SPOILER ALERT] Anderson has Milla Jovovich waking up inside an Umbrella Corporation medical facility, discovering she has vast psychic powers and then leaving where she is picked up by most of the characters who have fought alongside her throughout who are now wearing military uniforms and clearly hold some position of rank. This is entirely confusing. We are left uncertain as to whether this is Milla having been picked up after the nuclear explosion – if so, why do the other survivors now have high-ranking positions inside the Umbrella Corporation? – or whether the entire events of the film have been some type of virtual training simulation for her genetic modifications – which, if so, seems a complete cheat of an ending.