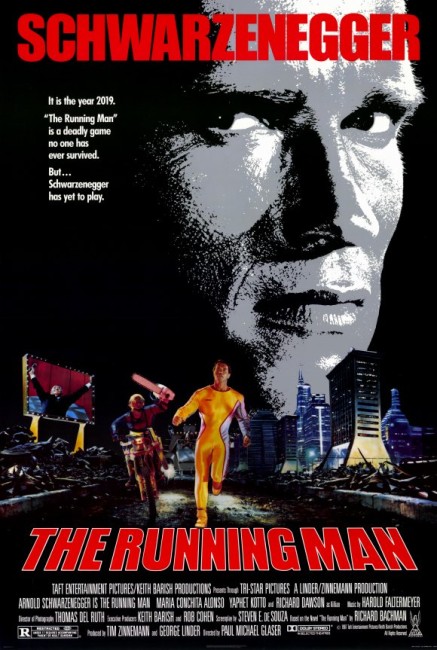 The year 2019. Following economic collapse, the United States is under the control of a totalitarian government. When policeman Ben Richards refuses to fire on a crowd of protesters, he is jailed on trumped-up charges. He and two political prisoners stage a breakout. They are recaptured but Richards’ brawn impresses Damon Killian, host of the tv show `The Running Man’, where contestants run for their lives against professional killers. Killian has Richards freed and forcibly recruited as a contestant on the show. However, when Richards, with only his bare hands, starts to overcome the show’s armed killers against incredible odds, Killian has a public embarrassment on his hands.

In mid-1985, it was revealed that Stephen King had used the pseudonym Richard Bachman to write several novels – Rage (1977), The Long Walk (1979), Roadwork (1981), The Running Man (1982) and Thinner (1984). The revelation came about after Washington bookstore clerk Steve Brown tracked down the copyright listings on the books after noticing the similarity of writing styles between King and Bachman. King cheerfully admitted to the guise, confessing that the books were earlier, less polished works that he had written before attaining fame with Carrie (1974). Subsequently, King has played around with the Richard Bachman alter ego, even publishing a ‘posthumous’ Bachman work The Regulators (1996). Stephen King properties being at a premium, the rights to The Running Man were immediately snapped up. [The only other Richard Bachman novel to emerge as a film has been Thinner (1996)]. While The Running Man was definitely one of Stephen King’s slighter works – he purportedly wrote it in 72 hours – it had the markings of an action movie all over it.

Only by the time that The Running Man arrived on screens it did not have a whole lot to do with Stephen King’s dark, claustrophobic near future fantasy anymore. In the story, Ben Richards is not a tough former cop, just an ordinary man who volunteers for the tv show in order to pay for food and expensive medicines needed by his family; while the pursuit is not conducted by costumed muscle-builders in a urban wasteland arena but conducted by bounty hunters who have 30 days in which to track Richards down anywhere in the country. In the film, the story has been scaled up as a vehicle for Arnold Schwarzenegger and his awful puns, while Stephen King’s dark dystopian fantasy has been replaced with a version of Punishment Park (1971) or Rollerball (1975) rewritten as a comic-book for Superstars of Wrestling audiences. Indeed, this wrestling focus seems a deliberate one and the film even recruits several professional wrestlers – Professor Toru Tanaka, Jesse Ventura, as well as pro-footballer Jim Brown – as actors.

Not a lot of thought has been put into depicting the future – it is just a generic totalitarian future. The US is supposed to have financially collapsed, but the future is just the same cliche downbeat, quasi-Cyberpunk milieu as usual – and much of the connecting logic is fuzzy. As action, The Running Man is passable but as science-fiction The Running Man is entirely negligible, indeed negligible as almost anything other than a World Wrestling Federation comic-book. The concept of the television show where people survive against hired killers had previously been done in the French The Prize of Peril (1983), which conducted many of the elements here several years before The Running Man was made, and much of what is seen here was later borrowed by The Hunger Games (2012).

What is gapingly obvious about the film is a set of double standards wide enough to run a multi-lane highway through. On one hand, it has a plot that rails against a society that keeps the masses pacified with televised ultra-violence (in the peculiar belief that the yearnings for democracy and freedom can be calmed by watching ultra-violence); on the other, it co-opts the look and tone of televised wrestling to tell its story. Some have tried to argue that the film is being satiric but this is not particularly in evidence, at least when it comes to the overall message. The film has little interest in celebrating freedom as an idea or engaging in an ideological discourse, rather it is interested only in the triumph of Arnold Schwarzenegger’s brute heroism. When the film reaches the end with Arnold Schwarzenegger triumphing over the game and sending host Richard Dawson down the chute to a nasty fate, it is not a celebration of freedom and democracy winning out but the film appealing to the same kind of black-and-white violent catharsis – ie. to see the bad guy get a nasty comeuppance – that it supposedly condemns this corrupt society for serving up to the masses.

The film does at least have a lurking sense of black comedy that makes it occasionally palatable. There is the odd line like “Give me the Justice Department – Entertainment Division,” or “I’m your court-appointed theatrical agent” and the recitation of the contract that Richards has to sign – which adds somewhat to the cursory action scenario. Up against Arnold Schwarzenegger, Richard Dawson, previously known as Newkirk on tv’s Hogan’s Heroes (1965-71), barnstorms with entertaining regard.

Director Paul Michael Glaser is best known for playing the former half of the duo in tv’s hit 1970s cop show Starsky and Hutch (1975-9). After the series’ demise, Glaser branched out as a director with the silly action film Band of the Hand (1986). Subsequent to The Running Man, Paul Michael Glaser has concentrated on sports-related films, including the skating film The Cutting Edge (1992) and the basketball film The Air Up There (1994). Glaser’s only other venture into fantastic cinema has been the disastrous Shaquille O’Neal genii film Kazaam (1996). That was widely pilloried and became an industry joke. Paul Michael Glaser has yet to return to the director’s chair outside of tv.