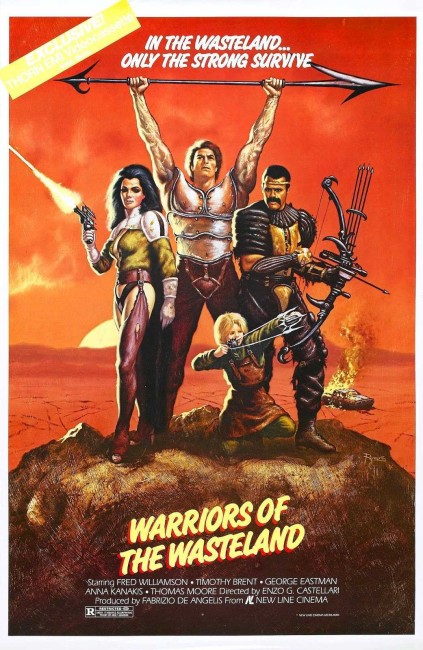 aka Warriors of the Wasteland
(I Nuovi Barbari)

In the post-holocaust world of 2019, survivors fight battles across the wasteland in armoured vehicles. The gay Templars have vowed to destroy every living person for having started the holocaust. One ex-Templar Skorpion saves a girl Alma from a Templar attack. Joined by an old rival Nadir, Skorpion comes to the defence of a small peaceful religious community and determines to stand up and finish the Templars off for once and all.

The New Barbarians is almost certainly the worst post-holocaust film ever made. The only thing sets it above the likes of Robot Monster (1953) and Plan 9 from Outer Space (1959) is a slightly higher technical polish. The only other post-holocaust film that comes anywhere near its cheesy ineptitude is Avi Nesher’s utterly whacko She (1983).

Castellari conducts his with dutiful slavishness – the hero defending a small pacifist community from wasteland crazies, a cute ragamuffin kid sidekick, and numerous chases in ramshackle vehicles. At least, The New Barbarians takes the underlying elements of gay leather fetishism that lay unmistakably beneath Mad Max 2 and brings them into the open – the Templars are openly gay and the film even features a scene where they rape the hero.

There is a great deal of lunacy, verging on the surreal, to be found in the vehicular battles between cars, which are disguised golf carts and dune buggies that travel at only about five miles an hour and comes armed with spiked wheels, flame-throwers under the hoods and something like a hedge-clipper sidearm that decapitates people victims in ridiculous sploshes of unconvincing gore. The dialogue defies belief – upon arriving at a Christian community the following straight-faced exchange takes place: Girl – “And our leader’s name is …” Nadir – “Let me guess. It’s Moses?” Girl – “Riiight.”