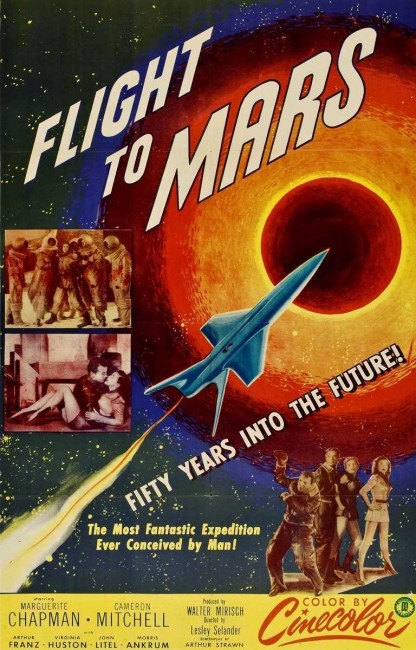 A rocket expedition is launched to Mars. After being hit by a meteor storm, the expedition crashlands on the Martian surface. The crew are greeted by a delegate of Martians and welcomed to their fabulous automated underground city. The Martians offer help in repairing the rocket. Romance between Earth men and Martian women blossoms but what the crew do not realise is that the Martian leader is only helping them so he can steal the plans of the rocket and build his own fleet of rocketships to invade Earth.

The year before Flight to Mars, Destination Moon (1950) premiered and opened up an entire new realm to science-fiction and with it the 1950s Golden Age of Science-Fiction. Destination Moon took science-fiction away from mad science labs and serial heroics. It had an unbridled optimism that suggested the universe was mankind’s for the taking for a new breed of scientists and engineers. It was a bold move that took the genre out of a ghetto where up to that point the rest of the universe had been little more than exotic locale for adventures. People still ventured forth into its unknown in rocketships, which had not changed in design, but the principal difference was that the people who went were not mere adventurers but conquerors armed with scientific rigour.

Flight to Mars was one of the first films to emerge in the wake of Destination Moon and came just before the decade started to turn in the direction of alien invasion. The first third or so of the film is a routine sense of wonder travelogue that takes one through the launching of the rocket; the wonders of interstellar space; a couple of philosophical speculations about the meaning of it all; arrival at the other world amid typically brightly coloured lights and finally to a city of mechanised wonders.

Unfortunately, the promise of wonders is one that Flight to Mars fails to fulfil. Once it arrives on Mars, the film slows down to drama of the most routine banality, concerning itself with Martian political double-dealing and burgeoning interstellar romance. At its most laughably insipid, the two cultures sit down to play a game of bridge together. As soon as the token woman of the expedition arrives in the Martian apartments she asks: “Where’s the kitchen?”

Flight to Mars is probably the first science-fiction film to depict the inhabitants of the other world as dressing in calf-length boots, Moonsuits, mini-skirts and spiked shoulder pads. The effects are reasonable and colourful enough for the period. One might also note the film’s principal love interest is named Alita in homage to the classic Russian Mars landing film Aelita (1924).

Director Lesley Selander made well over 100 films during a career from the 1930s to the 1960s, almost all of which are Westerns. His one other ventures into genre material was the horror film The Vampire’s Ghost (1945) and The Catman of Paris (1946).