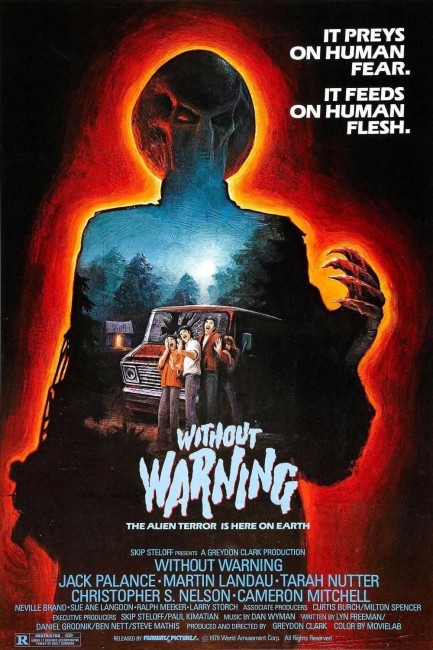 aka It Came Without Warning

Two teenage guys and their girlfriends go up to the lake. They discover a shed filled with dead bodies and are then pursued by an alien hunter that fires deadly organic discs that burrow into the skin of victims. The two surviving teens, Greg and Sandy, make it back to the nearby town and try to tell their story. The only one to believe them is the crazed army veteran Fred ‘Sarge’ Dobbs. Dobbs becomes obsessed with the aliens and starts shooting and pursuing them, believing everybody has been taken over. The two teens and the hunter Joe Taylor try to find shelter as the alien comes after them.

Without Warning came out not too long after the big success enjoyed by Alien (1979). It has essentially been construed as Alien‘s tale of crewmen being hunted through spaceship corridors brought down to Earth and tossed into a backwoods setting. In fact, it almost seems like an Alien that has been envisioned by way of the recent runaway hit of Friday the 13th (1980), which came out four month earlier, albeit with that film’s maniac substituted for an alien. Perhaps the greatest footnote that Without Warning has attained in retrospect is that the idea of the alien hunter hunting human prey was later used as the basis of Predator (1987). Although this connection is perhaps overly emphasised by commentators, the odd trivia note is that 7″ plus actor Kevin Peter Hall played both the alien here and in Predator.

Without Warning is mostly prosaic and routine. Greydon Clark never does much to generate suspense and tension out of scenes – for example, the characters played by David Caruso and Lynn Theel are pursued by the discs but we never see them being caught and killed, only their dead bodies in the hut. Moreover, the alien is only an intermittent menace – for much of the middle of the film, Martin Landau’s bug-eyed crazy becomes far more of a threat than the alien. We only ever get to see the alien’s appearance in the last ten minutes and for the rest of the film it is represented by its discs.

Certainly, the one thing that does work with a totally WTF aspect is the alien’s flying disc weapons. When the first disc appears – something like a fat, hairy frisbee, which is thrown through the air and attaches itself to a victim and sprouts yellow goo and mini-tentacles to dig in – there is a wild out-of-left-field aspect to it. They seem wonderfully evil looking creations – sitting with teeth chattering attached to the windscreen of the vehicle as Christopher S. Nelson and Tarah Nutter are trying to escape – and are represented by some reasonable effects.

One of the things that Greydon Clark’s genre films did well was come up with amazing casts. The credits for Without Warning makes for fascinating reading. The most prominent names of the day that Clark has managed to obtain are Martin Landau and Jack Palance, both caught at points where their mutual careers were in a backwater and they clearly needed the money. There are also several veteran names from exploitation cinema including Neville Brand as a local at the bar and Cameron Mitchell as the hunter with the liberal son who is the first victim to get it as the film opens. There is also Sue Ann Langdon, a minor name known for much tv, who plays the barmaid. One of the most fascinating names in retrospect is that of the young David Carsuo, later the star of tv’s NYPD Blue (1993-2005) and CSI: Miami (2002-12), who plays one of the teen couples who gets killed off early in the show.

It is however the top-billed Jack Palance and especially Martin Landau who give Without Warning its watchable life. Landau was caught in the slump between success on tv shows like Mission: Impossible (1966-73) and Space: 1999 (1975-7) and his rediscovery as a serious character actor in the late 1980s and eventual Oscar-winner for Ed Wood (1994). This was a point when he was turning up in some low-budget genre efforts to pay the bills – see also The Fall of the House of Usher (1979), The Harlem Globetrotters on Gilligan’s Island (1981), Greydon Clark’s The Return, Alone in the Dark (1982), The Being (1982), Access Code (1984) and Cyclone (1987).

Up until the 1990s when he proved otherwise, I always thought Landau an incredibly wooden actor. Here he spends much of the film acting increasingly more bug-eyed and crazy. Landau is such a blank performer that his efforts to do so come out laughably, as though a mannequin were trying to force expressions out. Eventually however, it is Landau’s nuttiness that gives the film its wild and crazy edge. Jack Palance is made to seem almost as weird and unbalanced as Landau, even if he does eventually come out on the side of the heroes. When we first see him, it is as a creepy and sinister hunter surrounded by the mounted heads of his kills in a scene that has unmistakeable resonances of the one where we first meet Anthony Perkins in Psycho (1960).