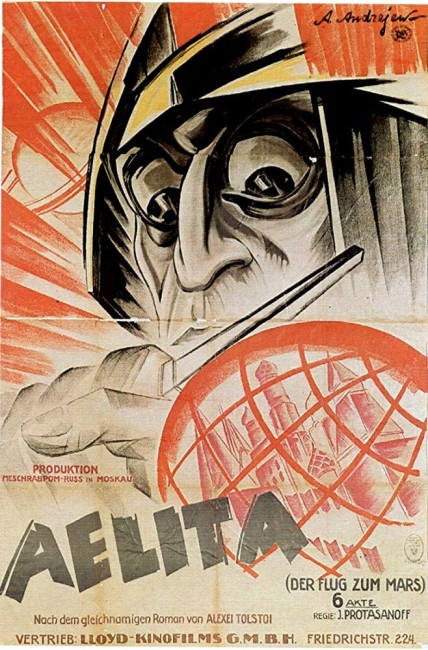 aka Aelita: Queen of Mars

A cryptic radio message is picked up all around the world that is believed to originate from Mars. In Moscow, Chief Engineer Los becomes obsessed with deciphering the message and finding a way to get to Mars. On Mars, Queen Aelita becomes preoccupied with looking at Earth through a telescope. Through this, she sees Engineer Los and becomes fixated on him. Los and his wife Natasha are forced by the housing authorities to give up a room in their apartment to Victor Erlich. The corrupt Erlich gets a job as a supply clerk but steals rations for his own use. He keeps making advances on Natasha, which enrages the jealousy of Los. Finally, this becomes too much and Los shoots Natasha. He evades the police by disguising himself as his co-worker Spiridinov who has left for another country. He places all effort into completing work on a Mars rocket. Meanwhile, the bumbling Kravtsov, who has been rejected by the authorities as a detective, determines to prove himself by solving Natasha’s murder and follows Los/Spiridinov. As the launch nears, Los and the soldier Gusev, along with a stowaway Kravtsov, board the rocket. Landing on Mars, Los and Queen Aelita throw themselves at one another, she eager to learn about the idea of a kiss, while Kravtsov seeks to obtain the aid of the rulers of Mars in arresting Los. Meanwhile, Gusev inspires the downtrodden Martian slaves to rise up and unite in the Communist revolution.

Aelita is a classic work of science-fiction from the silent era. The 1920s were a period when the science-fiction film was in its infancy and the idea of spaceflight was new. Only a few years earlier had seen Georges Melies whimsies such as A Trip to the Moon (1902) and An Impossible Voyage (1904) or Walter R. Booth’s The ? Motorist (1906) where the sun and Moon had faces and space travel mostly seemed achieved by motorcars and trains travelling so fast they left the Earth.

A couple of decades on, space travel had not gained substantially more sophistication. It was conducted by rocket ships but other worlds were seen as Utopian variants on the present as in the Danish Heaven Ship/A Trip to Mars (1918) or Aelita here. It took a few years later for Fritz Lang to make the magnificent Woman in the Moon (1929), offering up the best possible scientific conception of a journey to the Moon he could for the day. That was the last the silent era had to offer. Ahead into the sound era, spaceflight would be sporadically represented by serials such as Flash Gordon (1936) and sequels and Buck Rogers (1939), which opened outer space as an equivalent of the Wild West frontier. Apart from a brief launch at the end of Things to Come (1936) and the little-seen Soviet film The Space Ship (1936), serious space travel would have to wait until George Pal’s Destination Moon (1950), which spawned the great 1950s era of science-fiction cinema.

Aelita is a fascinating artefact from the early era of the Soviet Union, made in the formative years just after the Russian Revolution of 1917. In the decades ahead, Soviet cinema took over science-fiction in its own way, producing message-heavy works such as The Heavens Call (1959) re-edited in the West as Battle Beyond the Sun (1963), Storm Planet (1962) re-edited in the West as Voyage to the Prehistoric Planet (1966) and both of the former mashed up as Voyage to the Planet of Prehistoric Women (1968), Andromeda Nebula (1967), Moscow-Cassiopeia (1973), Per Aspera Ad Astra (1981) and Moon Rainbow (1983), as well as works from other Soviet controlled Eastern bloc countries such as the East German First Spaceship on Venus (1959) and the Czech Voyage to the End of the Universe (1963). These were at diametric oppose to Western science-fiction films of the era, lacking in alien invaders or atomic monsters but instead being ponderous efforts focused on the exploration of space and carrying the people’s revolution to worlds beyond.

What should be said for those coming to view Aelita in terms of genre history is that most of it is not a science-fiction film at all. There is the building of the rocket in the background and occasional flashes back to Queen Aelita viewing Earth from Mars through a telescope. However, the space launch does not occur until 90 minutes into the film’s 111 minute running time. The bulk of the film is centred around a mildly Dostoevsky-ian murder-jealousy love triangle where engineer Nikolai Tsereteli believes his wife (Vera Kuindzhi) is being unfaithful with Victor (Pavel Pol), the man who has been quartered in their spare room. The jealousy is initially mostly in Tseteteli’s head but later turns out to be founded, before he kills his wife and then dons a fake beard and glasses to disguise himself as a colleague who has disappeared. This attracts the attention of a bumbling fool (Igor Ilyinsky) who has been rejected from the police force and is determined to prove himself as a detective by collaring the murderer.

The story of Engineer Los and the jealousy-murder drama is not particularly well connected to the political story on Mars. Certainly, the jealousy-murder aspect and the characters of Erlich and Kravtsov do not appear in the original Alexei Tolstoi 1923 novel, which is more concerned with the building of the rocket and what happens on Mars. Much of this seems to have been inserted in the film to show Victor Erlich as a loathsome character – he is a petty thief, altering records to steal supplies while working as a clerk with the rations department and whisking Natasha away to illicit underground parties where people dress in luxury, dance, drink wine and dine (all of which are clearly seen as forms of bourgeois indulgence in contrast to the hardship and decency of the ordinary and honest Soviet peasants).

The film does eventually come to a corny “it was all a dream” ending where what happened on Mars and everything leading up to it appears to be inside Nikolai Tsereteli’s tortured mind. During the Martian scenes, there in some leery symbolism where Queen Aelita, the femme fatale of dubious allegiance into whose arms Tsetereli has thrown himself, has a bad habit of flickering back and forward between herself and the hero’s dead wife whereupon he is given to start strangling her.

Director Yakov Protazanov gained reasonable acclaim during the early Soviet era, although is almost entirely forgotten today, unlike other contemporaries such as Sergei Eisenstein and Dziga Vertov. Protazanov made a number of films, including a classic version of Alexander Pushkin’s The Queen of Spades (1916). Unfortunately, Protazanov fails to make Aelita a particularly interesting film, especially during the earthbound scenes.

Certainly, the Martian scenes are the most imaginative in the film and is where the set designers and costumiers have let themselves go. Aelita was made in the Constructivist design schema, a school of architecture and design that was in particular noted for producing a dynamic form of poster design, which the Soviets were pushing as new art form that symbolised the revolution. The sets and costumes come all in jutting block shapes – pillars, triangles, sweeping curves – and exposed wires. The costumes are unique – gowns and tunics with florid ornamentation and wide waists and headdresses made of wiring, false beards and gloves made out of transparent plastic, soldiers in ball-jointed armoured uniforms that make them look like robots, the slaves outfitted in box-shapes that enclose the head. The scenes where the revolution does occur, where the film is able to marshal a number of extras, do look visually impressive. It is here that Yakov Protazanov finally gives Aelita some dynamic life, particularly during a mythically inflated flashback that depicts the Revolution and the symbolic forging of the hammer and sickle.

Almost certainly, Aelita drew influence from the stylised sets in the German classic The Cabinet of Dr Caligari (1919). Dr Caligari was the first work that showed that cinema need not be about literal depiction and that sets could be built and lit with stylistic exaggeration to represent inner states of mind. Aelita‘s sets are in a similar style of theatrical exaggeration as was developed out by many of the works of German fantastique that followed in Dr Caligari‘s footsteps. Both Aelita and Dr Caligari also end with a twist that reveals everything that has happened to be a dream/hallucination occurring in the mind of one man. Although there does seem something odd about a work like Aelita taking Dr Caligari as inspiration as surely Dr Caligari‘s twisted, Expressionistic worldview and outlook of a madman would be at diametric oppose to the reason-based Soviet ideology and a film that is made as a work of inspiration about the worker’s revolution.

It is also worth contrasting these scenes to the very similar ones in Metropolis (1927). In fact, Aelita‘s influence is such that it was almost certainly seen by Fritz Lang before making Metropolis. In both films, there is a female figure at the centre of the revolution who is seen as desirable but untrustworthy. The scenes of Queen Aelita rousing the rabble to revolution are very similar to the ones where the robot Maria inspires the crowds to tear down the city. Similarly, the scenes where the slaves revolt contain the seed of the idea that Fritz Lang expanded upon more elaborately, of using crowds as a single unified force of expression. Unlike Metropolis, Yakov Protazanov fails to make the sets here come to life. Fritz Lang did and Metropolis is a work that is still viewed and amazed at today by audiences for its extraordinary visuals, whereas Aelita is at best revived as a curiosity piece.