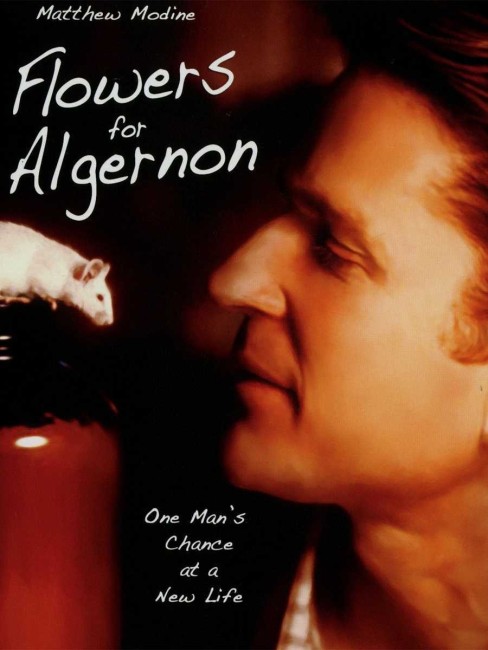 Intellectually handicapped bakery worker Charlie Gordon is chosen by doctors for an experimental operation that will enhance his intelligence. The operation is a success and soon after Charlie’s mental prowess begins to rapidly expand. In a very brief period of time, Charlie learns to read and is soon studying philosophy. However, Charlie’s intelligence begins to expand so much that the co-workers at the bakery, who previously made fun of him, react by signing a petition to get him fired. Through reading scientific studies, Charlie realizes that the experiment is not stable and that soon he is going to lose everything that he has gained and revert to being a simpleton again.

Daniel Keyes’ Flowers for Algernon is a classic. The short story version Flowers for Algernon (1959) won the science-fiction community’s Hugo Award when it came out, while Keyes’ novel-length expansion of the story Flowers for Algernon (1966) also won the science-fiction community’s Nebula Award. The story in both its forms has become regarded as a classic and is studied in school curricula. What makes Flowers for Algernon such a classic is its narrative voice. The entire story comes from the point-of-view of Charlie and we see through the way the language in his journal changes how Charlie’s intelligence moves from an intellectually handicapped to genius-level IQ and then back. In particular, the ending of the story where Charlie tries to comprehend his coming death, all seen through the writing of a child, is heart-breaking.

There have been numerous dramatic adaptations of Flowers for Algernon. Cliff Robertson first appeared in a tv version The Two Worlds of Charlie Gordon, which aired on The United States Steel Hour in 1961, and had him nominated for an Emmy Award. Robertson repeated the role in the most famous version of the story, the feature-film Charly (1968), for which he won a Best Actor Academy Award and several other major awards. The story has also been adapted into a stage play, starting in 1969. There was even a musical adaptation Charlie and Algernon, which first appeared in 1980.

Flowers for Algernon was remade as this tv movie starring Matthew Modine. Charlie Gordon is a plum role for any actor – it has such an acting range that it cannot help but accrue awards nominations – indeed, Matthew Modine received a Golden Satellite nomination for his performance here. This version is marginally more faithful to the original Daniel Keyes story than Charly was. The genius side and some scenes – like where Charlie stands up at scientific conference to denounce the ethics of those who created him – are much more effectively written here than they were in the 1968 film. This version also adds some scenes with Charlie going back to reconcile with his mother (Bonnie Bedelia).

Unfortunately, in director Jeff Bleckner’s hands, the memorable emotional effect of the original short story/novel drowns in mawkish sentiment. Jeff Bleckner is a veteran who has been directing tv since the mid-1970s, venturing into occasional genre mini-series such as Peter Benchley’s The Beast (1996) and the Dean R. Koontz adaptation Black River (2001), but appears to have never had any ambition to move beyond television. Flowers for Algernon comes with a deadening earnestness – a banal piano score tinkling away in the background of every scene seems there to point us in the direction of what to feel. Necessarily stripped of Daniel Keyes’ inner voice, which was what made the story/novel work, all that the tv movie has to rely upon is a series of banal montage scenes.

What would have made Flowers for Algernon work is stripping it of Jeff Bleckner’s sentimentalism and concentrating on Matthew Modine’s central performance. What we get instead is something that is less an adaptation of Daniel Keyes’ story than it is a variation on Forrest Gump (1994). The film makes a cliche dichotomy – the low intellect Charlie has little in the way of brains but has a big heart and cares for everyone, even when they are making fun of him, and this is seen as being a more preferable way of looking at the world than the evidently more emotionally complicated life that having a higher IQ brings. To me, this seems no more than the feelgood wishing for a simpleton’s way of looking at the world and the belief that naivete equates with happiness.

It is this simplistic reduction of the story that in effect ruins the film. Daniel Keyes’ version was heart wrenching but it was not mawkishly sentimental like the film is. Had Jeff Bleckner dropped the tinkly piano score, had stopped trying to tell the story so that every person watching could understand it, and had simply created a bare stage for Matthew Modine’s performance, he could have made a classic. Instead, all that we get is a film about a character that takes a tragic arc from simpleton to genius and back but in doing so only ends up sentimentally pining for a simpleton’s view of the world.

Matthew Modine does an okay job playing Charlie. Alas, one is never convinced that what is on show is ever more than Matthew Modine playing Charlie Gordon. We never feel that what we are seeing is more than the sum of the performance, something that could never be said for Cliff Robertson’s essayal of the role, which seemed to convince that Cliff Robertson was Charly. At other times, Matthew Modine’s delineation of the character seems less like an intellectually handicapped man becoming a genius than it does a variant on Dr Jekyll and Mr Hyde – in particular, a scene where he flips back and forward between two personalities during a barroom encounter with a woman, which has a bizarrely out of place silliness to it. Kelli Williams, best known for the tv series The Practice (1997-2004), plays with an earnestly intent seriousness.