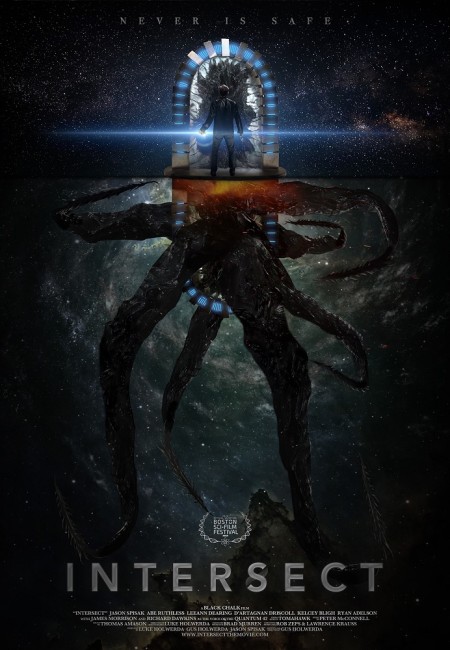 Ryan Winrich is part of a team at the Miskatonic University that have been conducting research into being able to send objects back into the past. They now perfect the process. Ryan works alongside his girlfriend Caitlin Webb and Nate Beaumont who have all been friends since they were children. Nate is then killed as he tries to transport himself through the time portal. Ryan also realises that what is happening may relate to mysterious happenings in his childhood, including his ability to see creatures that nobody else can.

Intersect was a feature film directorial debut for Gus Holwaedra. Holwaedra had previously made the full-length documentary The Unbelievers (2013) about atheism – one of that film’s subjects, the celebrated scientist Richard Dawkins, voices the computer here.

The very setting of the Miskatonic University locates Intersect in the midst of the writings of H.P. Lovecraft (1890-1937) – for more detail see Lovecraftian Themes. The Miskatonic University appears in several Lovecraft stories where it was a campus located in New England that held a repository of occult knowledge. This sets up an expectation of Intersect being a Lovecraftian film and the experiment unleashing abominations from beyond this world. We also get reference to a student called Howard Phillips (Lovecraft’s first names), while Nate’s full name on his gravestone is revealed to be Nathan Charles Beaumont, referencing another popular horror/fantasy Charles Beaumont, known for various episode of The Twilight Zone (1959-63) and the book that became 7 Faces of Dr Lao (1964). The film even gets in reference to Edwin Abbott and Flatland (1884).

However, as Intersect plays out, nothing could seem further from a Lovecraftian film. What we get is a placid middle-of-the-road film peopled by young good-looking leads. The early sections of the show are centred around the laboratory where they try to perfect the process. These scenes seem placid and unexceptional where it would be harder to find anything further from the mood of the cosmic horrors of H.P. Lovecraft unless maybe you looked to a romantic comedy. Certainly, the film does build up to the jolt sacrifice of the character of Nate part way into the story with some effect.

We don’t even get much of a Time Travel story, although we do get reference to H.G. Wells’ The Time Machine (1895) – in a cute touch James Morrison is at one point given a model of the machine from the film version The Time Machine (1960) as a birthday present. And while you sat back anticipating the film to get its teeth into some temporal paradoxes and perturbations, this is exactly what it doesn’t do – instead what we get is sort of a Coming of Age tale in reverse where the story traces the three protagonists back through their shared past. This is considerably less interesting than the time travel story one anticipated.

That said, the film finally allows everything to pay off at the end. Here it reveals the long Coming of Age story in reverse is eventually another time paradox film. There is mild cleverness to this, although nowhere near as clever as a similar kind of ending in Twelve Monkeys (1995). The last few minutes throw in a cluster of genre elements – Amnesia, terrorists, mysterious observers that are revealed to be Lovecrfatian monsters from other dimensions unleashed by the time travel experiments. These come so rapidly you don’t easily digest them – I, for instance, wasn’t sure at the end of the significance of the swirling orb that Caitlin gives Jason Spisak was meant to be.