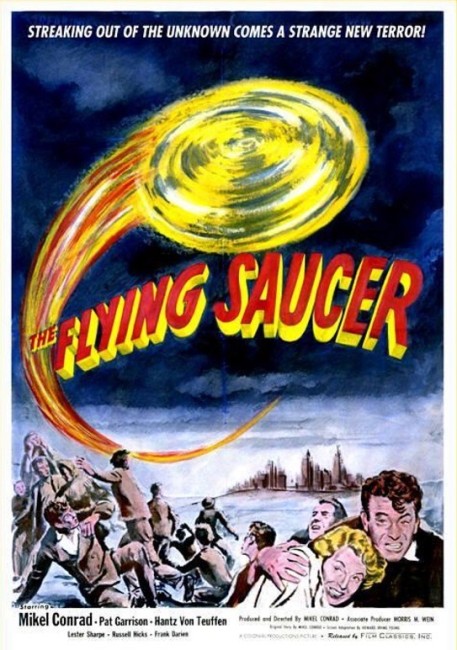 There are reports of flying saucers in the skies of Alaska. Government agent Mike Trent is sent to determine what is happening, his boss believing that the saucers have been designed by the Soviets to carry atomic bombs. A cover story is created that Mike, the son of a local industrialist, has burned out from too much of the playboy lifestyle and is going to recuperate at his father’s lodge on the shores of the Taku Glacier. Fellow agent Vee Langley is assigned to play the role of Mike’s nurse. Tempted by the urge to hit the bars in Juneau, Mike follows the trail of a scientist who has built a working flying saucer. At the same time, Communist agents are attempting to obtain the saucer.

The Flying Saucer – not to be confused with the subsequent Italian UFO comedy Il Disco Volante (1964), which was released in English as The Flying Saucer – has the distinction of several firsts. It was the first ever film made about UFOs. It was also the very first film to come out amid the great Golden Age of Science Fiction of the 1950s – it was released in January of 1950, six months before Destination Moon (1950), the work that is generally credited with sparking off the Golden Age.

The interesting thing about The Flying Saucer is that it came out fairly early into the inception of the UFO phenomenon – indeed, the term ‘unidentified flying object’ was not even coined until two years later. Pilot Kenneth Arnold’s famous encounter with UFOs had occurred in June 1947 and the Roswell Incident happened one month after that. These served to place flying saucers into the public fascination, although this was far divorced from what the UFO phenomenon would become in later years – there is yet to be anything about alien abductions, impregnation, suppressed memories, anal probings, Men in Black, the Greys, alien lizard people in human disguise and so on.

What we have here locates the flying saucer phenomenon fairly and squarely into the two anxieties that would preoccupy 1950s science-fiction cinema – the atomic bomb and the fear of Communist infiltration/invasion. Mikel Conrad’s boss Russell Hicks, for instance, assumes it obvious that the saucers are a Communist plot to deliver atomic bombs.

What we end up with is no more than a thriller about the hunt to prove the existence of the saucer. In description, this makes The Flying Saucer no different than say the average episode of The X Files (1993-2002, 2016-8). However, the action here is all the mundane stuff of spy thrillers. Even then a good quarter of the film deals with Mikel Conrad and his ‘nurse’ Pat Garrison lounging around the lodge on shores of the Taku Glacier and the thriller aspect doesn’t kick in until around the latter half and mostly consists of Conrad doing research by getting drunk in bars. We get one saucer overfly in the middle of the film and nothing else right until the very end where Conrad discovers its hiding place, returns with people from his agency and the saucer takes off and explodes in mid-air.

The Flying Saucer is not terribly interesting. The thriller plot is not very tightly wound. And as a tackling of the widespread public fascination with flying saucers that existed during this period, it is conceptually underwhelming. The one plus is that we do get some fine shots of Alaska and the Taku Glacier during the journey there and especially during the flight by the small plane over the icepack. They are scenes that are crying out for colour, nevertheless are beautiful to see.

Director/writer/producer/star Mikel Conrad was a minor actor from this period. He had small roles in Abbott and Costello Meet the Killer, Boris Karloff (1949) and the US edited scenes for Godzilla, King of the Monsters (1954). The Flying Saucer was the only film he ever directed.