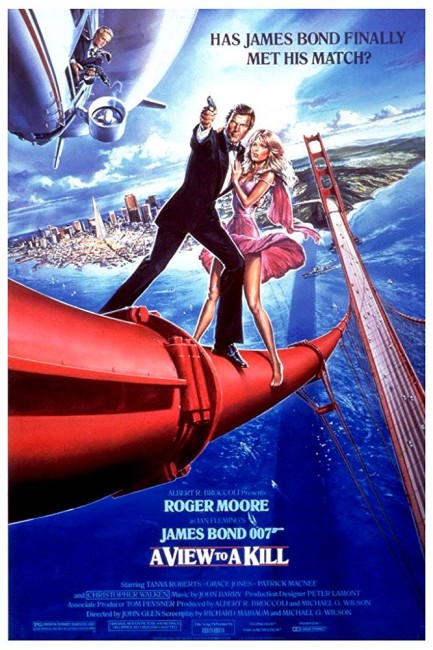 The Soviets are found to have procured a silicon chip that is impervious to the electromagnetic pulse of a nuclear explosion. James Bond is sent to investigate its creator, French computer chip billionaire and championship horse breeder Max Zorin. Bond discovers that Zorin is the result of a Nazi breeding experiment to create a superior race of children who have all turned psychotic. In San Francisco, Bond finds that Zorin is planning to detonate bombs along the San Andreas faultline in order to dump Silicon Valley into the ocean and give himself the world monopoly on silicon chips.

A View to a Kill was the fourteenth James Bond film, produced by Albert R. Broccoli. It was also the seventh and final entry starring Roger Moore. The Roger Moore entries always represented the worst aspects of the James Bond films. Sean Connery’s Bond lived in a cartoon world but one that took itself seriously; the Roger Moore Bond films made no pretense to reality whatsoever. Increasingly, the Roger Moore Bonds became bi-annual cartoon spectacles taken over by ridiculously over-the-top and improbable action sequences, a luscious parade of beautiful women and international scenery, and with all the substance of a McDonald’s burger.

A View to a Kill is probably one of the most anonymous and forgettable of the Roger Moore Bond films. It wheels out the puns, the women, the action sequences, the international locations. However, the effort seems tired – and at fifty-eight and visibly sweating in the action scenes, Moore seems far too old to play the part of the dashingly suave man of action. (Indeed, with the subsequent entry The Living Daylights (1987), Moore stepped back from the part to allow the younger Timothy Dalton to inherit the role).

Equally appropriately, A View to a Kill was also the first James Bond film to no longer be based on an Ian Fleming book up until Casino Royale (2006). All the other book titles had been exhausted and this took itself from a short story From a View to a Kill in the collection For Your Eyes Only (1960). The Fleming story is a routine effort about Bond hunting for a packet of documents stolen from a motorcycle courier – the only point of connection between it and the film is the Paris setting.

There is unevenness to A View to a Kill. John Glen, despite having directed the most James Bond films of any director on the series, was also the series worst director. Glen’s first Bond entry For Your Eyes Only (1981) was promising but he became the one who subsequently took the series in its silliest directions. Some of the sequences that John Glen sets up here are as bad as anything in Moonraker (1979), which is generally regarded as the worst of the Moore Bonds – there is a ludicrous sequence with Bond hanging around the outside of a fire truck racing through the streets of San Francisco and an equally silly one with Roger Moore racing through the streets of Paris in a bifurcated car.

Although the silliest moment of all is the prologue containing submarines disguised as icebergs and the insertion of the Beach Boys California Girls (1965) as Bond indulges in some impromptu snowboarding. From this, it is not hard to see that the James Bond series was something that nobody involved was regarding as serious any longer.

Tanya Roberts is one of the most vapid and blank of all actresses in the James Bond series. Christopher Walken is probably the wrong person to play a Bond villain – original considerations for the part apparently included David Bowie and Sting. Walken goes psycho in his usual cold fish way, not the larger-than-life way that a Bond supervillain requires. [His world domination scheme is a weak one that has been stolen from Superman (1978), with more than a few nods to Goldfinger (1964)].

A View to a Kill was also one of the few films to employ the remarkable animal sexuality of singer Grace Jones. She goes through all the snarling, man-eating thing she did in the previous year’s Conan the Destroyer (1984) and is effectively cast as another of the super-villain’s menacing retainers, but the film throws her character away in an appallingly washed-out ending that shows her falling to Bond’s sexual allure and sacrificing herself.