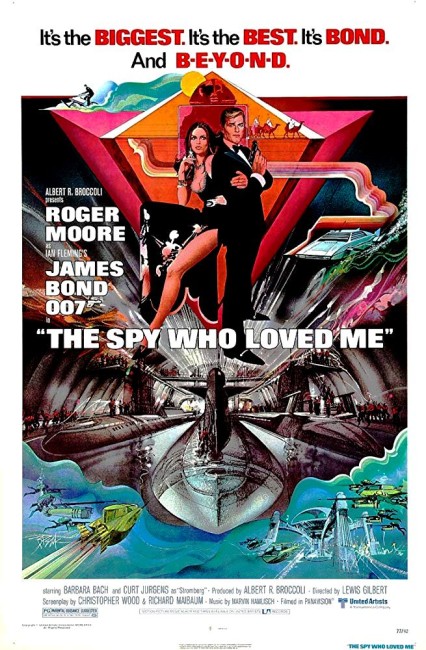 British, American and Russian nuclear submarines are mysteriously vanishing at sea. The KGB and British Secret Service both send their top agents Major Anya Amasova and James Bond to Egypt where an auction is being held of a device that is able to trace a submarine by its heat exhaust. Bond and Amasova are forced to cooperate to fight mad shipping magnate Sigmund Stromberg who has captured the submarines inside the hold of a giant tanker. From there, Stromberg is planning to use fire the nuclear warheads from the submarines to destroy the surface world and create his own underwater empire.

The Spy Who Loved Me was the tenth James Bond film. It was the third Roger Moore entry and the point where an inflated comic-book absurdity began to overtake the series. In the two previous Bond films, Live and Let Die (1973) and The Man with the Golden Gun (1974), Roger Moore had played Bond as a straight, handsome leading man. In The Spy Who Loved Me, Moore finally emerged from Sean Connery’s shadow to stand on his own. The difference between the two actors is immediately apparent – Roger Moore seems much more comfortable than Sean Connery ever was in a dinner-jacket, but Connery always looked more believable throwing a punch and doing the dirty work.

The end result was that as the James Bond series progressed under Roger Moore, Bond became an effete caricature and all the gut action became de-emphasised. This eventually allowed the comic-bookish element to take over the series. The excesses that the next entry Moonraker (1979) would take completely overboard are already in evidence here – the schoolboy-level innuendos (“Tell him to pull out immediately,” says M, before cutting to Bond making out in a chalet) and the slapstick inanity (particularly the pieces with the car that converts to a submarine, flashing its indicators underwater and driving up onto a beach with Moore holding a fish out the window).

The previously film, The Man with the Golden Gun, had been the second lowest earning film of the James Bond series and for a time the series’ future seemed to be in doubt. Harry Saltzman, who had co-produced all the James Bond films up to that point, sold out his interest, allowing his partner Albert R. Broccoli to continue on alone. Contrarily, Albert R. Broccoli placed a then sizable $13 million into the production, making The Spy Who Loved Me the most expensive James Bond film ever made at the time. It had the most international locations – Switzerland, Sardinia and Egypt – of any Bond film to that point.

The sets are spectacular – a 300 x 100 ft soundstage (the largest in the world) was built at Shepperton Studios just to house the tanker interior. It became known as the 007 Stage and was used in a number of high-profile films until it burned down during the filming of Ridley Scott’s Legend (1985). A 70 foot long model of the tanker was also constructed, which appears utterly awesome on screen.

Despite the size of the production, The Spy Who Loved Me isn’t a great James Bond film (although many fans consider it the best of the Roger Moore entries). The plot has a number of good ideas, which get somehow lost – like the subplot about Anya’s vow to kill the man (Bond) who killed her lover. It would be interesting to see this storyline dealt with in a Pierce Brosnan or Daniel Craig Bond film – there it would undoubtedly be played with more respect to feminism and the revenge plotline (which would make for an extremely strong story) be allowed to take centre stage. Here it is glossed over in an irritatingly sexist ending, which allows Anya to forget about her anger and succumb to Bond’s charms.

Otherwise, there is a surprising lack of invention – the villain is one of the series dullest, his motives for wanting to destroy the world are merely taken for granted and Curt Jurgens’ playing makes Stromberg one of the series most anonymous villains. Without a doubt, Barbara Bach ranks as one of the very worst actresses to ever grace the Bond series – which takes some doing.

Everything seems a rehash of just about every other Bond film – the central idea is taken from You Only Live Twice (1967) (notedly the previous entry in the series to be directed by Lewis Gilbert). Where You Only Live Twice has international space launches being swallowed up and abducted from orbit, The Spy Who Loved Me has international nuclear submarines being swallowed up and abducted at sea; the central climaxes of both films have Bond freeing the trapped crews and spearheading an attack on the villain’s shuttered control room; the epilogue of You Only Live Twice has a submarine surfacing on Bond and the girl of the show making out in a life-raft, this has a Naval destroyer picking up Bond and the girl making out in an escape pod.

The action scenes seem like a collage of every other successful action sequence in the previous Bonds – lengthy underwater scenes from Thunderball (1965), the gadget-laden car from Goldfinger (1964), the ski chases from On Her Majesty’s Secret Service (1969), the henchman attacking Bond on the train from Live and Let Die (1973) and From Russia with Love (1963). Despite the size of the film, its best moments are not its most spectacular ones but its quietest – like the change of pace from helter skelter action to suspense in the attack on the control room and the re-routing of the missiles. (The latter sequence is interestingly taken direct from Ian Fleming’s Moonraker (1955) novel).

Roger Moore, Lewis Gilbert and Richard Kiel who plays the steel-toothed henchman Jaws would return with the series next entry, Moonraker (1979), an effort where the extravagance and silliness that began here was allowed to skyrocket through the roof, resulting in arguably the most ludicrous entry in the series.