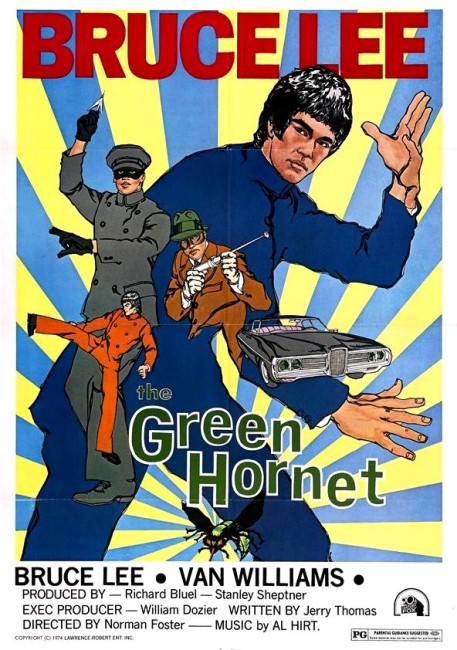 By day, Britt Reid is the editor of the newspaper The Daily Sentinel and head of its tv station. By night, Britt becomes the masked Green Hornet and heads out with his manservant Kato in the hi-tech car Black Beauty to fight crime. Britt realises that someone is killing off the heads of the city’s crime rackets but puzzles over their using hunting weapons. He traces the connection to the Explorers Club, only to become the club’s next target. A UFO crashes outside the city. The aliens burst into Britt’s home and demand that he make a television broadcast, telling the populace not to panic and clear the roads so they can be picked up by another ship. They take Britt’s secretary Lenore Case hostage to ensure his cooperation. Britt realises they are not aliens but that this is a scheme masterminded by the disgraced nuclear scientist Dr Eric Mabouse in order to hijack the Air Force transport of an H-bomb. Britt receives a tip off and tries to stop thugs from trashing a Chinese restaurant. This places him in the midst of a Tong war as gangs try to force businesses in Chinatown to accept their protection rackets.

The Green Hornet was a masked hero who originated on radio in the self-titled show The Green Hornet (1936-52), created by George W. Trendle. The show established the basics of the mythology with The Green Hornet being newspaper publisher Britt Reid who would go into action with his manservant Kato (who was originally Japanese but changed to Filipino after the outbreak of World War II) in their car Black Beauty. The radio show established the basics of the myth, along with various ancillary characters such as secretary/love interest Lenore Case and crusading police captain Mike Axford (who became a district attorney in the tv series). One of the more interesting trivia aspects is that The Green Hornet was created by Trendle and Fran Striker who also created The Lone Ranger and wound into the series was a backstory that Britt Reid was the Lone Ranger’s nephew.

The Green Hornet was adapted into two film serials The Green Hornet (1940) and The Green Hornet Strikes Again (1941) from Universal starring Gordon Jones in the first and Warren Hull in the second, while the voice was dubbed by Al Hodge who played the Hornet on the radio, and with Keye Luke playing Kato. There have also been various comic-book appearances. There was later a big screen film remake The Green Hornet (2011) starring Seth Rogen as Britt Reid, Jay Chou as Kato and with Cameron Diaz as Lenore Case.

With the tv series The Green Hornet (1966-7), producer William Dozier had just had enormous success with the campy Batman (1966-8) tv series. Looking to create a similar property, he turned to resurrecting the old radio show as a tv series. When it came out, The Green Hornet tv series was criticised as too much of an attempt to create another Batman – the handsome playboy with the alter ego as a masked superhero who goes into action in a customised car, along with his masked sidekick (even though technically the original conception of all this predated the first appearance of Batman).

Unlike Batman, The Green Hornet was played straight rather than tongue-in-cheek. That may well have been the series downfall – being a straight adventure in a time when superheroes were readily having their seriousness deflated thanks to Batman – and as a result the series only lasted for a single season of 26 episodes. The Green Hornet and Kato did cross over to meet up with Batman and Robin in four episodes of Batman in order to provide a boost for the new show. Despite the series lack of success in its day, the show has gained a reasonable cult following.

In historic retrospect, the biggest thing that The Green Hornet series did was introduce Bruce Lee to the world. At the time the series was made, Bruce Lee was a complete unknown. Lee moved to the US in 1959 and became a martial arts instructor after graduating school. He came to the attention of William Dozier who cast him as Kato after seeing his martial arts moves. Lee had acted in minor roles back in Hong Kong but Kato was his first English language part and his first major role.

One of the most notable things about this was how unusual it was during this period to cast an Asian in a starring role in any Hollywood production. Along with George Takei in Star Trek (1966-9), which had premiered one day earlier than The Green Hornet, Lee was the first Asian actor with a regular role in a US tv show. This was immediately noticed in Hong Kong where the show was retitled The Kato Show. Lee hit his peak as a star in 1973, the same year he also died, when his hit film Enter the Dragon (1973) came out. As Lee became a worldwide sensation, his earlier films were resurrected and fed back to the public with there being such demand that even uncompleted works were pushed out under the Lee name. Among this Lee fad, this film was compiled from episodes of the Green Hornet tv series and sold as a Bruce Lee vehicle.

The Green Hornet features three episodes from the tv series (well, four technically, one being a two part episode). In terms of their order of appearance on screen here, the stories featured are The Hunters and the Hunted, the two-parter Invasion from Outer Space and The Preying Mantis. The episodes have been edited down to just over 20 minutes in length. The surprise about this, especially when compared to numerous serials that were being stripped down and released in feature format during the 1960s, is that each of the stories holds up surprisingly coherently at condensed length, which would tend to suggest that there was much padding that went in to make out a full hour on air in the tv series.

From what I have seen of The Green Hornet and the film here, the concept was always a far superior one than the prosaic stories that the character was placed into. Certainly the costumes look wonderfully cool. Van Williams has an impossible handsomeness. Black Beauty is one of the great tv gimmick cars that sits up there alongside Lady Penelope’s pink Rolls, the General Lee, KITT and the Batmobile. On the other hand, everything transpires with the grinding of insipid formula tv writing and production of the period – the car chases clearly all take place within the obvious and artificial streets of the 20th Century Fox backlot, for instance. The direction is unexceptional – indeed, one of the directors on the film here was the notorious B-budget hack William Beaudine who churned out numerous Bowery Boys films and made the Z-budget likes of Billy the Kid Versus Dracula (1966) and Jesse James Meets Frankenstein’s Daughter (1966) around this same period.

As was the case with most superhero works of this era – Batman being the one exception – the superheroes rarely fought other super-villains as their comic-book originals did and most of the plots were mundane ones that would easily have slotted into any tv crime show of the day. It may well be that most of the writers were coming from the crime show genre themselves and only writing what they knew, or more likely that the budget did not stretch to coming up with more elaborate special effects that these would have required. Or quite possibly that a paradigm shift had not occurred that saw superheroes as anything more than empowered crimefighters – even the tv superheroes of the decade ahead such as The Six Million Dollar Man (1973-8), Wonder Woman (1975-9), The Amazing Spiderman (1977-9) and The Incredible Hulk (1977-81) still fought mundane nemeses for the large part.

Disappointingly, Bruce Lee only gets a handful of martial arts scenes. On the assumption that the episodes featured in the film would have been chosen to highlight the fighting skills that his new stardom was based around, the action sequences remain unexceptional – although part of the reason for this being that neither the action film nor the martial arts film existed as a genre at this point and so directors were not used to staging action scenes dynamically.

The first and third stories are unremarkable – the first about a hunting club targeting underworld kingpins, the other about a Tong war in Chinatown (as represented by more 20th Century Fox backlot sets). The film does at least toss in an alien invasion during its second story, although this has the feel of something that fell out of a cheap 1950s B movie – the aliens turn up wearing crinkly aluminium foil jumpsuits and bug-eyed goggles that look as though they come from a joke shop, not to mention the laughable image of the overweight leader of the group outfitted in his skintight jumpsuit. There is a vague It Came from Outer Space (1953) plot about them just wanting to repair their spaceship and go home but then comes a preposterous twist revelation that reveals this is only a fake scheme by an earthbound criminal mastermind to hijack an H-bomb.

There was a further film theatrically released from episodes of The Green Hornet with Fury of the Dragon (1976).