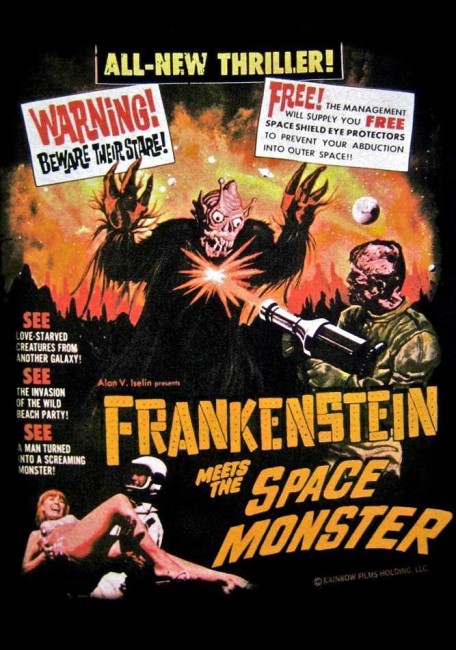 A saucerful of aliens led by the Princess Macuzan has been secretly watching the Earth. They are destroying all rocket launches, believing them to be missiles that the Earth is firing at them. At Cape Kennedy, NASA unveils Colonel Frank Saunders, the astronaut that will man their Mars mission Mayflower 2. What the public do not know is that Saunders is in fact an android designed by Professor Adam Steele. The Mayflower 2 is launched but is shot down by the aliens. Crashing in Puerto Rico, Saunders staggers out of the capsule with his circuitry damaged and starts attacking everybody he encounters. Steele and the military head to Puerto Rico where they mount an operation to find Saunders. Meanwhile, the alien saucer has landed nearby in the area and the aliens have started capturing all girls capable of breeding in order to repopulate their atomically decimated planet.

Frankenstein Meets the Spacemonster is regarded as one of the classic Z movies of the 1960s. It is not perhaps as classic in the Z movie stakes as the likes of Cat Women of the Moon (1953) Attack of the 50 Foot Woman (1958) or the king of them all Plan 9 from Outer Space (1959). Nevertheless, it has attained the status of a classic in the genre.

These days a great many science-fiction films of the 1950s and 60s, particularly those made on less-than-A-budgets (and sometimes just every single one of the films made in the era) get labelled as ‘Bad Movies’ and are laughed at on the grounds of lesser technical sophistication or the corniness of their dialogue. This seems an intolerant attitude – one that is all about feeling superior and laughing at others who were less than perfect. It is an attitude that shows like Mystery Science Theater 3000 (1988-99, 2017-8) have been notable in promulgating. Not that one shouldn’t laugh at films that frequently fail widely in terms of what they try to do. However, there should be a clear line drawn between a work trying to tell a story and not having the creative or technical resources to fully do so and a film where the seams are tearing apart, where the imagination alone is simply not enough to paper over the cracks or the collapse into the absurdity of their own pretensions as many of Edward D. Wood Jr’s films do.

In this regard, I am not sure if Frankenstein Meets the Spacemonster meets my requirements for a Bad Movie as opposed to merely a B movie that has been made on the cheap. It does have the good old B movie plot of aliens coming to Earth to abduct women for breeding purposes, which fuelled a number of bad movies of the era – notably Mars Needs Women (1966) – although equally one that was halfway reasonable – I Married a Monster from Outer Space (1958).

On the other hand, there is the absence of signifiers that truly land Frankenstein Meets the Spacemonster into the same neighbourhood as Plan 9 from Outer Space and the aforementioned. There is little in the way of unintentionally absurd dialogue; there are no special effects that come with the monster’s zippers or the saucer’s wires showing; there is no amazingly bad performances given by actors at the dreg ends of their career a la Bela Lugosi in Glen or Glenda? (1952). There is not even a plot that moves at a soporific pace and has the feeling of a novocaine shot – the film passes its 77 minute running time quite snappily. Even the performers in the film seem to be at least halfway competent rather than feel like wooden blocks reciting lines and a couple of them – James Karen and Bruce Glover – even went onto roles in various A-list movies.

Certainly, one doesn’t wish to pretend that Frankenstein Meets the Spacemonster ever amounts to more than an amiable but unmemorable B movie that probably came along about seven years too late to find its true calling amid the great 1950s B sf movie fad. It does have its occasional moments. There is one effective surprise a few minutes in when Frank Saunders (Robert Reilly) is introduced as the Mayflower astronaut at a NASA news conference only to then freeze in front of reporters and have to be whisked away whereupon James Karen peels Reilly’s scalp back to reveal a skull filled with diodes and circuits. The ‘Frankenstein’ monster has an undeniably effective grotesquerie when it emerges after the crash with its half-burned face with circuitry and diodes showing.

Much of the fun to be had in the film comes from the aliens. The most entertaining performance in the film is the one given by Lou Cutell as the alien scientist Dr Nadir. Made up with bald wig and rat-like ears, Cutell elocutes the part and underlines everything with an evil gleam that gives the impression he was having the time of his life. As Princes Macuzan, Marilyn Hanold plays with an appropriately haughty coldness.

The scenes with the aliens abducting women (who are oddly all Caucasian instead of Latino considering that we are supposed to be in Puerto Rico) have an amusing softer-than-softcore exploitation absurdity to them. There is an amusingly almost-lurid scene where Marilyn Hanold imperiously demands: “Bring the captive girl in. I want to inspect her myself” and has an abducted bikini-clad babe (who looks surprisingly undistressed for someone who has seen her lover disintegrated and then been snatched at gunpoint) brought before her for inspection.

A substantial amount of the film is represented by stock NASA and Air Force footage, including helicopters, light planes, bombers flying in formation, military manoeuvres, and command and communications centres. We even get tours of the launch area at Cape Kennedy. This footage is extremely well integrated into the film, far better than in the much more well-regarded B movie of the era Invaders from Mars (1953), which employed stock army footage and just looked like it. In particular, it looks as though the army really is mounting a large-scale attack on the alien saucer at the climax. The film also went to shoot on location in Puerto Rico and we get a number of second unit shots of scientist hero James Karen and assistant/girlfriend Nancy Marshall buzzing around the sights of San Juan’s La Fortaleza on a moped.

The most frequently remarked-upon comment about Frankenstein Meets the Spacemonster is the obviously noticeable fact that it is not a Frankenstein film – it does not feature Baron Frankenstein, any of his descendants, nor any monsters being brought to life. The film does however feature an android that for a time goes amok after its programming is wiped. The nearest the film gets to justifying the Frankenstein title is naming its amok android Frank and a line where Nancy Marshall’s lab assistant comments on the situation: “What are you saying? That he could turn into a Frankenstein?” There is probably no point being pedantic enough to point out here that Frankenstein was the creator of the monster, not the monster itself. Rather, we can see, as in Death Race 2000 (1975), that the name Frankenstein has become generic enough that it can be applied to almost anything of deformed or monstrous physiognomy.

One of the more bizarre elements of Frankenstein Meets the Spacemonster is the involvement as screenwriter of George Garrett who later became the poet laureate of Virginia. The Dark Sky Films dvd release comes with an accompanying booklet written by Garrett that tells the story of his participation, where Garrett claims the film was conceived as a comedy that spoofed the elements of the genre. One feels a little dubious about this as the idea of spoofing the conventions of the 1950s B movie was not something that started to emerge until the 1970s. Certainly, there is nothing at all in Frankenstein Meets the Spacemonster that ever suggests that it was written with tongue planted in cheek as opposed to a completely serious work. Me suspects that Garrett has claimed the higher ground of hindsight to distance the potential embarrassment of his involvement.