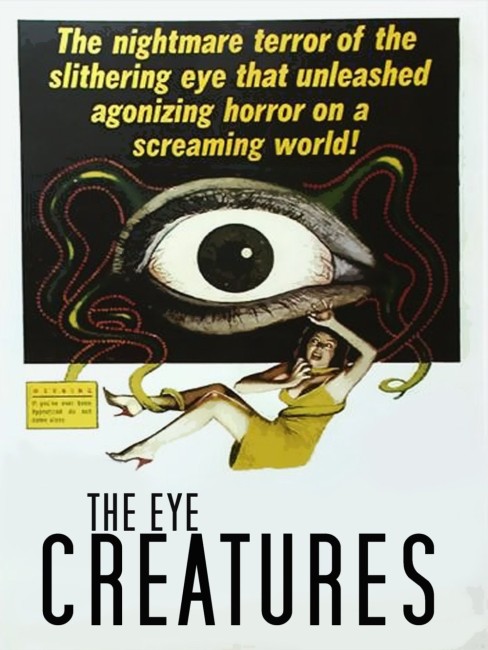 aka Attack of the The Eye Creatures

A UFO lands at a local Lover’s Lane. Stan Kenyon and his girlfriend Susan Rogers are preparing to elope when they run one of the aliens down in their car. Stan calls the police out to investigate. The aliens then kill a huckster passing through town and substitute his body for that of their dead comrade. When the police find the body, they arrest Stan for the murder. Meanwhile, the dead alien’s disembodied hand causes trouble. Stan escapes from jail and tries to organise the other teenagers to stand up and fight the aliens.

The Eye Creatures is one of a series of Z-budget films made by low-budget director/writer/producer Larry Buchanan. In the mid-1960s, Buchanan was given the assignment of remaking some of the lowest budgeted AIP films of the 1950s for television. The Eye Creatures remakes the camp teen classic Invasion of the Saucer Men (1957). In others of the series, Buchanan’s Creature of Destruction (1967) remakes The She-Creature (1956), while his In the Year 2889 (1966) remakes Roger Corman’s Day the World Ended (1955); Curse of the Swamp Creature (1966) remakes Voodoo Woman (1957); and Zontar: The Thing from Venus (1966) remakes Corman’s It Conquered the World (1956). These films were made cheaply – with even lower budgets than the AIP originals had had. In most cases, the scripts of the AIP originals were copied scene for scene with the most minimal of dialogue changes.

The Eye Creatures is an Edward D. Wood Jr-type bad film and is probably the worst of these AIP remakes conducted by Buchanan. It is worth watching for its thorough shoddiness. Like the supposed night-time setting that flickers back and forward between day and night because someone clearly either couldn’t afford day-for-night processing or simply forgot. There is the dismembered hand, which never extends into the shot beyond the wrist and does the remarkable job of tiptoeing (or tip-fingering) up vertical surfaces on two fingernails. The extras playing the aliens can be seen running around in sneakers and masks that have simply been placed over the top of leotards and street clothing. There is a completely unconvincing model UFO effect.

The plot defies credulity – one minute hero John Ashley is arrested on a murder charge and then makes an escape from jail, stealing a police car – but when he calls the police back they merely say forget it, they will collect the car later. Or the aliens that can build saucers capable of crossing interstellar distance but seem unable to build a pair of industrial strength sunglasses. Acting can defy belief too – the mugging of the two radar operators spying on Lover’s Lane at the start of the film is truly astounding, and that of the general investigating the UFO is akin to the effect one would get placing Bob Hope on LSD. A later tv retitling hilariously renames the film Attack of the the Eye Creatures.