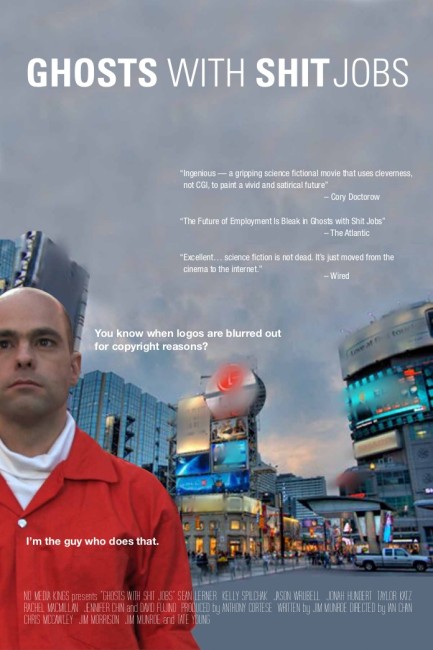 The year 2040. ‘Window on the World’, a documentary tv series from Mainland Chinese, goes to Toronto to interview various people about the jobs they are forced to take in a post-economically collapsed Western world. Several people are profiled. Babymakers:- Gary and Karen are a couple who install and prep robotic babies for export to China. The constant noise of so many babies drives them crazy. Digital Janitor:- Oscar works as a digital janitor where his job is to go into a lifelike virtual simulation of the past and digitally erase brand names. Oscar then begins to suffer ill effects from the long hours he spends inside the simulation. Silk Gatherers:- Brothers Anton and Toph scour the edges of the city for samples of the radioactive silk left by giant mutant spiders. Human Spam:- Serina has a job working as a temp agent at various offices where her real purpose is to get into casual conversations with co-workers or anyone she meets and drop references that praise particular brand names.

Ghosts With Shit Jobs is a film developed by Canadian science-fiction writer, graphic novel creator and computer game designer Jim Munroe. Munroe has published a number of science-fiction novels with the likes of Flyboy Action Figure Comes with Gasmask (1999), Angry Young Spaceman (2000), Everyone in Silico (2002) and An Opening Act of Unspeakable Evil (2004). Munroe had previously written and co-directed, along with several others, another science-fiction film Infest Wisely (2007) that was released as a series of webisodes. Here he also directs the Silk Gatherers episode. All his work comes under the creator-owned imprint of No Media Kings. In Munroe’s own words, Ghosts With Shit Jobs was made on a budget of $4000 (raised through a crowdsourcing campaign) and with borrowed equipment – if you didn’t know this, the film comes with a slickness of polish that looks as though it was made for far more than that.

On had no idea what to expect from Ghosts With Shit Jobs before sitting down to watch. It rapidly proves to be a fascinatingly intelligent science-fiction film that blows you away with its complexity of ideas. Much of the world reminds you of the trilogy of contemporary science-fiction books that William Gibson wrote with Pattern Recognition (2003), Spook Country (2007) and Zero History (2010). In particular, the character of Rachel MacMillan’s Serina the human spammer feels like something that could easily have stepped out of the world of Hubertus Bigend and would be perfectly at home in his employ.

One was considerably impressed with the maturity of writing and science-fictional concepts that Jim Munroe throws around. Munroe does what all good conceptual science-fiction should do – he depicts a future where those in it are just ordinary people living their lives. The beauty of the film comes in a number of throwaway lines that these characters casually toss off that abruptly make us do double-takes when we think about the layered cultural assumptions that come in what they are saying. Like when Jason Wrubell and Kelly Spilchak, the husband and wife in the Babymakers episode, talk about babies that became corrupted and throw out offhand lines like: “So what do you do with the batch [of babies]? Trash the defectives and start over with a new batch.” Or Joshua Hundert in the Silk Gatherers episode dismissing reports of giant mutant spiders wandering the area and throwaway lines like “Oh man, we’ll be drinking water tonight.”

Another fascinating cultural assumption is that in this future Caucasian people are in a minority. The way this is conducted with discussion about the struggle of immigrants dealing with prejudice or the Chinese making comments about how white people don’t seem to mind working 12-14 hour days makes this one of the few films that gives you a feeling of the assumptions made about them that the minorities who live in a dominant other racial culture must deal with on a constant basis.

The complaint you could make about Ghosts With Shit Jobs is that the story strands lack much life of their own. They are more a series of slice of life human interest pieces from a magazine type tv show (as the film’s format mimics). There are somewhat underdeveloped aspects – you are not quite sure, for instance, what the talk of viruses in the system in the Digital Janitor episode are all about or why Oscar is coming down with headaches and illnesses. The most fully developed of these is the Human Spam episode and the character of Serina where Rachel MacMillan gives a fine, complexly shaded performance in the part. All of the story strands are woven together in a long climactic venture into the Wayback Machine simulation where the film makes an often affectingly sentimental tribute to the past. The show is wrapped up with a coda back in the Chinese studio that holds a nicely dark sting.

Jim Munroe subsequently went on to write Haphead (2015), another very similar micro-budgeted science-fiction film, which was directed by Tate Donovan, one of the directors here.