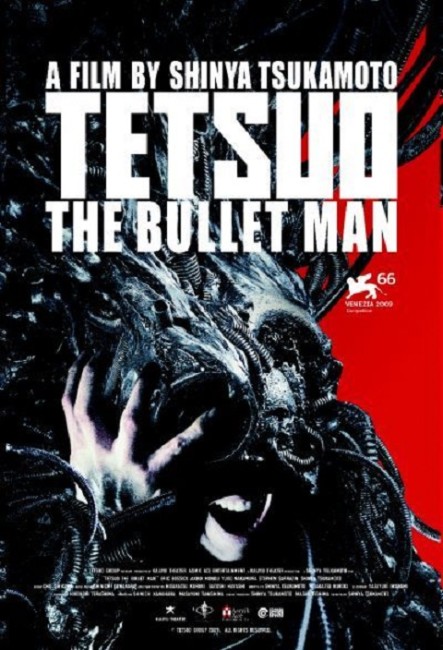 Anthony Stoval is a Western office worker living in Japan with a Japanese wife Yuriko and their young son Tommy. Anthony is out walking with Tommy when the driver of a vehicle runs down and kills Tommy. As Anthony tries to deal with the grief in the aftermath of this, he finds that his skin is turning to metal and that pieces of machinery are growing out of his body. He is then pursued by armed mercenaries who attempt to capture him – however his body manifests weaponry to eliminate them. He learns that his transformation is due to experiments conducted by his father. After his mother died of cancer, his father built an android copy of her, which then became pregnant with him, giving birth to a child that was part machine. Anthony is now pursued by a mystery man who places a bomb around Yuriko’s neck in order to force Anthony to surrender to anger and allow the machine half to fully take over his body.

Tetsuo: The Iron Man (1989) was an extraordinary low-budget debut feature from Japanese director Shinya Tsukamoto. A frenetically surreal vision of Cyberpunk and sexual fetishism, Tsukamoto created vividly unforgettable images of human bodies transforming into machines, including the infamous scene where the hero tears his girlfriend apart when his dick turns into a high-speed drill bit. This was enough to put Shinya Tsukamoto on the map as a director and he went on to place his unique vision of repression, sexual fetishism and tortured masochism on a number of other films, including the demon-hunting film Hiruko the Goblin (1990); Tokyo Fist (1995) about boxing and masochism; Bullet Ballet (1998) about a man who becomes obsessed with obtaining a gun; and Gemini (1999) where a doctor’s upstanding life being overturned by a malevolent doppelganger. The 00s have been less kind to Shinya Tsukamoto where efforts such as A Snake of June (2002), Vital (2004), Haze (2005) and Kotoko (2011) have failed to gain the acclaim and festival attention of his earlier work. His only hit during the 00s was Nightmare Detective (2006), which led to a sequel Nightmare Detective 2 (2008).

Shinya Tsukamoto had earlier made a sequel to Tetsuo: The Iron Man with Tetsuo II: Body Hammer (1992). Tetsuo: The Bullet Man was Tsukamoto’s third venture into the Tetsuo franchise. It is one of Tsukamoto’s most commercial moves to date – it is his first film shot in English language and using a Western lead actor, Canadian-born Eric Bossick who resides and works as an actor in Japan. Notably, it comes from a director who has otherwise been defined by his outlaw wildness and refusal to operate inside any commercial boundaries perhaps at last seen the need to make some concessions.

Tetsuo: The Bullet Man revisits the same man-machine fusion imagery of the first two Tetsuo films. Disappointingly, Shinya Tsukamoto finds very little that is new and different to add to the mix this time. What is perhaps most noticeable is what is missing from the other Tetsuo films – all the wild, frenetic sexual imagery of the first film in particular has been cleaned up. Where Tetsuo: The Iron Man was made by a novice director going out on an edge and plumbing wildly and crazed areas of sexual fetishism, Tetsuo: The Bullet Man feels like it is made by the same director having mellowed into middle-age.

I am unable to find any details about Shinya Tsukamoto’s private life, whether he is married or has a family of his own, but Tetsuo: The Bullet Man feels like it is about the same downtrodden man that we saw in Tetsuo: The Iron Man in 1989 twenty years on where he has settled down, is no longer concerned about the maddening drive of sexual impulse and has become a family man who cares more for his wife and children. The end of the film has a noticeable mellowness, showing the hero having conquered his machine impulses (presumably) and settled down in domestic contentment with a new child.

Tetsuo: The Iron Man took place on a purely surreal level and made no sense except in terms of its insanely frenzied imagery; Tetsuo II: Body Hammer started to offer an explanation for this. By contrast, Tetsuo: The Bullet Man gives everything a science-fictional explanation that removes any surrealism from the mix and turns the story merely into a science-fiction/horror film about a man undergoing a metamorphosis. More than Tetsuo: The Iron Man‘s Cyberpunk surrealism, the explanations offered about what is happening here tend to resemble a Frankenstein film – although if anything the plot point about the husband building an android replica of his wife resembles the scientist Rotwang in Metropolis (1927), while the elements about the father conducting experiments in weapons development that cause the son to mutate resemble the plot of Hulk (2003).

Shinya Tsukamoto is also a long-time user of handheld camerawork – long before it became fashionable in the 00s. His films often take place in a frenziedly chaotic blur of kinesis. The problem here is that whenever Tsukamoto wheels out his machine man, the film splinters off into madly crazed camerawork and visual chaos – constant blurred motion, images of madly shrieking and writhing metal faces, grating metal noise on the soundtrack (some of which the end credits surprisingly reveal comes from the king of industrial music himself Trent Reznor) so much so that it is impossible to tell what is happening. We gain the impression of the Bullet Man being something monstrous with a misshapen cast iron mask, dripping oil, crusted machine parts like a crustacean carapace, maws that contain guns, even a jet engine, although there are few shots that ever give a clear vision of the machine man.

Shinya Tsukamoto has never been strong on plots – it is never fully clear why all the people are breaking in to shoot at Eric Bossick, for instance, or what The Guy (played by Shinya Tsukamoto himself) is trying to do. Nor is Tsukamoto’s ability to write English-language dialogue the best – the swat squad leader makes taunts such as: “What kind of man are you – you son is murdered, your wife tortured and you do nothing? Yuriko, you should have married a real man.” Tsukamoto does however give one of his best performances as the sinister character known simply as The Guy who taunts Eric Bossick and takes wife Akiko Monou hostage using a pendant bomb in a series of psychologically tense climactic scenes.