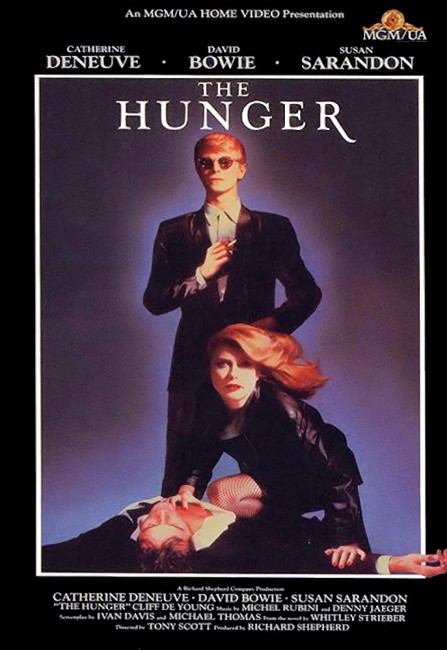 Miriam and John Blaylock are vampires, both hundreds of years old, living in present-day New York City. All of a sudden, John’s age begins to catch up with him, all within a matter of two days. He tries to get help at a gerontology institute but is ignored. Now an old man, he tries to kill himself but Miriam places him in a coffin alongside her other lovers, all aged but unable to die. When Sarah Roberts, the doctor from the gerontology institute comes looking for John, Miriam seduces her and takes her as her new lover, letting her blood mingle into Sarah’s body so that she can become the same kind as she.

Throughout most of the 1970s, the vampire film had been trying to rid itself of the cliche of a sinister figure in dinner-suit, cape and East European accent and find a way of addressing the modern world. During this time, the classic vampire’s outmodedness was variously spoofed, modernised and deconstructed, before it finally found itself anew in the dark, sexually magnetic vampires of Anne Rice and on film beginning with the Frank Langella Dracula (1979). The Hunger was one of these revisionist vampire films. You could hardly miss it – the image of New Wave group Bauhaus singing their hit single Bela Lugosi’s Dead (1979) intercut with the opening credits more than appropriately serves as an announcement that it is goodbye to traditional capes, garlic and crucifixes. In fact, The Hunger is such a relentlessly revisionist vampire film that we never see any fangs, crucifixes or even hear the word vampire mentioned anywhere throughout.

Indeed, The Hunger is a film that seems more Vampyr (1932) than vampire. It draws upon the same somnolent, ambient power and sense of all-absorbing atmosphere that Carl Dreyer did. It is what might have emerged if you can imagine Dreyer having discovered fashion commercials. There are few films where such exquisite detail has been placed into the cinematography, lighting and set dressing. In fact, there are times when The Hunger is a triumph of look over content. The pace is often slow.

The original 1981 Whitley Strieber novel has been heavily pared down and often altered. You can clearly see that plot is something that director Tony Scott regards as a necessary evil and only remembers to return to every now and again when he looks up from his imagery. Nevertheless, The Hunger is a film of exquisitely sumptuous excess. Maybe it is one of the most luxurious and elegant of all vampire films. There are moments of lingering beauty – the image of David Bowie sitting forgotten in a waiting room, outlined beside a rising tendril of cigarette smoke from an ashtray, having aged ten years before Susan Sarandon remembers to find him again.

The Hunger was the directorial debut of Ridley Scott’s younger brother Tony. Tony has much of a commonality of style with Ridley – you could easily mistake The Hunger for one of Ridley Scott’s films if you did not know the difference. Both brothers have a love of dusky chiaroscuro lighting schemes filtered through hazy smoke-filled rooms, strobe-lit action scenes and the heavily symbolic use of doves. In fact, you could even draws parallel thematic links between The Hunger and Ridley’s Blade Runner (1982) – both films have non-human characters at the centre of their story who are passionately engaged in a quest to halt their own abruptly approaching mortality.

While one draws comparison between The Hunger and Dreyer’s Vampyr above, the two films are in fact worlds apart in the use they put all the atmosphere to – for Vampyr, it was a sense of uncanny otherworldliness; for Tony Scott in The Hunger, it is all concentrated in the rendering of exquisite upper-class surroundings. Indeed, The Hunger rarely evokes a sense of the supernatural or otherworldliness – the vampirism is implied as being scientific in nature (associated with blood transfusions, a gerontology lab); the most supernatural the film ever gets is the seeming subconscious telepathy that Miriam and Sarah share. The vampire film that The Hunger comes closest to is actually Daughters of Darkness (1971), where the vampire was similarly a bisexual woman who is equated with Old World European sophistication and a jaded decadence. Although, while Delphine Seyrig in Daughters of Darkness was a vamp in the fullest sense of the meaning, Catherine Deneuve is softer and more ambiguous a figure, an elegant and enigmatic presence that haunts the centre of the film.

The Hunger noticeably lacks any traditional vampire movie conflict. In most vampire films, the vampire represents a sense of ‘wrongness’ that is in direct opposition to our norms, but The Hunger lacks any sense of such a conflict. Possibly it is because Tony Scott is so successful at crafting the elegance of Catherine Deneuve’s presence. Up against Deneuve, Susan Sarandon gives an uncharacteristically neurotic performance, while David Bowie is not given much to do before he is buried under old age makeup. There are no other characters there for us to place our sympathies with.

Catherine Deneuve dominates the screen, yet with her there is no sense of the vampire being a forbidden force erupting beneath polite society as there is in Bram Stoker’s Dracula (1897) and most vampire works that have followed from it – rather here the vampire has contrarily successfully adopted and is seen as embodying the height of social sophistication. Nor is there any sense of the vampire representing dangerous sensual passions and temptations that must be banished. Daughters of Darkness, for example, set up a standard married couple that the vampires then came to seduce and split apart. There is a nominal couple here in Susan Sarandon and Cliff De Young – [in an interesting trivia note this makes a screen team-up between the Brad and Janet’s from either Rocky Horror film – Susan Sarandon played Janet in the original The Rocky Horror Picture Show (1975) and Cliff De Young was Brad in Shock Treatment (1981)] – but he is such a marginal character that there is no sense that the seduction of Sarandon is disrupting anything. It is also a seduction where Susan Sarandon hardly seems an unwilling party – there is no sense of her being seduced against her nature or surrendering to a forbidden love as there usually is in a vampire film. In fact, take away the peripheral trappings of vampirism and there is little here that could not act as a non-fantastical gay love story.

More than anything, what the film embodies is a fear of death and aging. Rarely has the sense of the creeping obscenity of age eating away beauty and the sense of powerlessness it brings been conveyed than during the first half of the film where David Bowie suddenly discovers his age is rapidly catching up with him. (The old-age makeup work by Dick Smith is outstanding – it far surpasses his work that netted him an Oscar for Amadeus (1984) the subsequent year). The latter half of The Hunger is less effective as the horror of age elements are put aside and the narrative becomes even more loose, before the film reaches an unsatisfyingly melodramatic ending and an enigmatic epilogue. However, Tony Scott dresses the film with such artistic elegance that the real horror that emerges from it is of a dream-like tour through the world of a high-fashion layout, revealing that which is antipathy to the values of beauty such a world holds up – death and decay – lurking at its core.

The Hunger was not a huge success and is invariably dismissed by other critics, yet is not an unworthwhile effort. The film has gained a small cult in subsequent years, particularly among the gay community who appointed Susan Sarandon as some kind of icon. Alas for Tony Scott, he took the film’s failings to heart and abandoned more artistic filmmaking for the blatant commercial successes of Top Gun (1986), Beverly Hills Cop II (1987), Days of Thunder (1990) and Enemy of the State (1998). Scott, like his brother, proved an interestingly erratic talent. Easily dismissible commercial fluff like the abovementioned sits alongside strong films such as The Last Boy Scout (1991), True Romance (1993) and Spy Game (2001), which have not always been great successes. His later films, the likes of Man on Fire (2004), The Taking of Pelham 1 2 3 (2009), Unstoppable (2010) and Domino (2005), showed the melding of arthouse sensibilities with works produced for the commercial mainstream.

Tony Scott’s other genre films include:- the submarine thriller Crimson Tide (1995) about the tension leading up to an outbreak of nuclear war; the psycho-thriller The Fan (1996) featuring Robert De Niro as a psychopathic baseball fan; Domino (2005), a completely out-of-control supposed biopic of a bounty hunter that ends with some fantastic elements; and the time travel film Deja Vu (2006). Tony and Ridley maintained their own production company Scott Free Productions. The two later combined as producers of the cable series also called The Hunger (1997), an anthology series of erotic horror stories, which was unrelated to this film except in name. The two also produced the psycho black comedy Clay Pigeons (1998), the mediaeval adventure Tristan + Isolde (2006), the tv mini-series remake of The Andromeda Strain (2008), the modernised Edgar Allan Poe adaptation Tell-Tale (2009), the tv mini-series remake of Coma (2012), the tv mini-series Labyrinth (2012) about the quest for the Holy Grail and the horror film Stoker (2013).

Other Whitley Strieber books adapted to the screen are:- Wolfen (1981), an interestingly failed film about intelligent wolves; Communion (1989), based on Strieber’s true-life claims that he was abducted by aliens; and the tv series Hunters (2016) was based on another of his books about the FBI hunting alien visitors. Whitley Strieber’s non-fiction work of fringe science environmentalism The Coming Global Superstorm (1987) was also turned into the disaster movie The Day After Tomorrow (2004). Strieber also wrote two book sequels to The Hunger in the early 2000s.