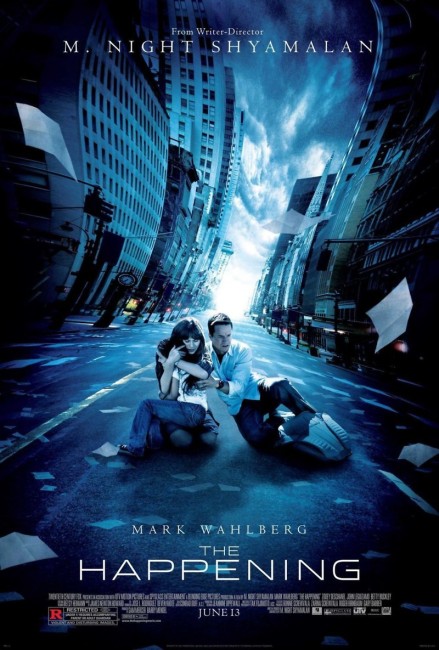 Elliott Moore is a high school science teacher in Philadelphia. Suddenly there comes news of a spate of inexplicable mass suicides in New York City. This is initially believed to be some type of terrorist attack. Elliott, his wife Alma, co-worker Julian and Julian’s young daughter Jess set out by train to New York City. The train is forced to stop in the middle of nowhere after news that the entire northeastern seaboard of the US has been struck. A group of people at a diner determine that large population areas are being targeted and so everyone sets out to a remote area that is unaffected. Along the way, Elliott begins to believe that what is happening is being caused by plants that are reacting to human presence and sending out a toxin. The only choice appears to be to gather in smaller and smaller groups.

There are some directors (indeed almost any creative talents) who have a hit (or hits) and the rest of the career seems to be a long drift downwards from that brief ascendancy where they seem to be struggling to find again the combination of elements that brought lightning to strike in that bottle. Within the genre, you could point to names like George Lucas, Gene Roddenberry and Tobe Hooper, all of whom had hits early on and then fell to self-recycling or dull hackwork that lacked anything that fired their original works up.

And then there is the special place reserved for M. Night Shyamalan. Shyamalan burst out to world attention with The Sixth Sense (1999), which became the sleeper hit of the early 00s. The Sixth Sense‘s left field ending became a major talking point and there were dozens of films that attempted to create the same type of last-minute twist. Shyamalan was acclaimed as a major new talent on the order of a Steven Spielberg.

Subsequent to The Sixth Sense, M. Night Shyamalan progressed through a series of films where he (or at least the publicity people) promised more of the same conceptual mystery and last minute surprises. When unveiled these turned out to be total damp squibs or downright loopy endings such as Unbreakable (2000) where Bruce Willis discovers that the whole purpose of his life is that … he is a comic-book superhero; Signs (2002) where aliens invade and Mel Gibson discovers that … predestiny has led up to a moment where Joaquin Phoenix must throw a baseball to defeat them. By the time of The Village (2004), a film about monsters attacking a supposed 19th Century village where the big twist ending was that … they were really in the present day but faking it, the results ended up being laughed off screen by most.

The growing M. Night Shyamalan Big Letdown reached its nadir with Lady in the Water (2006) where Shyamalan’s ramblings about predestination and especially the scenes where he cast himself in the role of a character who has a future as a great writer, attained wide ridicule. Even before The Happening opened, it was being greeted with wide derision in the press. It was even worse with Shyamalan’s subsequent fantasy adventure the disaster of The Last Airbender (2010) and the Will and Jaden Smith vehicle After Earth (2013), although did pick up with the Shyamalan produced The Night Chronicles 1: Devil (2010) and his collaborations with Blumhouse, the Found Footage horror comedy The Visit (2015) and the split personality film Split (2017) and its sequel Glass (2019), and Old (2021) about a beach where people rapidly age.

Beneath the considerable negative publicity he has attracted, M. Night Shyamalan is not a negligible filmmaker. He certainly has a directorial command, is capable of creating scenes that are genuinely eerie and has an ability to obtain fine performances from most of his casts (one exception might be Zooey Deschanel here). His mystical outlook and recurrent themes of predestination frequently descend into the wacky but you cannot deny that his films have an originality of ideas that is lacking in most of his Hollywood contemporaries. I must confess to having liked Lady in the Water for all of these reasons. If only Shyamalan could obtain a co-writer who could hold his clearly inflated sense that everything he writes is a work of genius in check, he could go to amazing places. If nothing else, despite audience letdown effect, most of Shyamalan’s films have been big box-office hits. Even Lady in the Water, which is regarded as a flop, earned a not immodest $42 million, while the universally detested The Last Airbender earned some $130 million.

Which brings one to The Happening. The Shyamalan Letdown has been such that he had to attain co-financing from his native India. He made a big thing in pre-publicity interviews about how he is open to collaboration, not the auteur with the bloated ego that everyone thinks. Heck, Shyamalan has even trimmed back his own cameos – he does appear in The Happening but one failed to notice where. There are no big conceptual surprises to The Happening, excepting perhaps the publicity machine not telling us too much about the nature of The Event before the film. One hoped that Shyamalan could pull something off despite the negative buzz that The Happening accrued before opening. Alas, The Happening was yet another big Shyamalan letdown.

Certainly, The Happening starts well with the sense of eerie dis-ease that M. Night Shyamalan does well. There is a particularly good opening scene set in Central Park where two friends sitting on a bench see as everyone suddenly freezes in motion and then start walking backwards, followed by a scene where Allison Folland plunges a hairpin into her own neck. There are bizarre images throughout – of a building site where people start jumping off the construction scaffolding en masse, or of people hanging from an avenue of trees and a man throwing himself under a lawnmower. Shyamalan offers some perceptive defiances of the usual cliches of survival drama – Spencer Breslin’s attempt to play a Hollywood hero and kick down a door to take the supplies they need comes with disastrous consequences, while Mark Wahlberg’s science teacher makes a refreshing intellectual hero who takes command of the situation with scientific methodology rather than movie heroism.

The Happening is one of the new breed of post-9/11 catastrophe films we have seen in the last few years – see the likes of War of the Worlds (2005), Diary of the Dead (2007), I Am Legend (2007), The Mist (2007), Cloverfield (2008), The Day the Earth Stood Still (2008), Knowing (2009) and 2012 (2009), which focus on survivors attempting to puzzle over and hold it together in the face of an overwhelming and inexplicable disaster. The Happening is one of the oddest amongst these. These others have opted for standard menaces like alien invaders, zombies, giant monsters and other-dimensional horrors, whereas M. Night Shyamalan gives us … plants (or nature) turned against humanity.

This puts The Happening in the company of 1970s films like The Hellstrom Chronicle (1971), Frogs (1972), Day of the Animals (1977) and especially The Day of the Triffids (1981). However, what Shyamalan gives us is a vague and faceless threat where plants appear to be spraying pollens that cause people to commit mass suicide. Although whether this is the case or not is unclear. Just like Hitchcock in The Birds (1963), various ideas are speculated – military nerve gas, the confluence of nuclear power plants on the North-eastern American seaboard, global warming and nature giving humanity a warning – but nothing is ever confirmed.

Certainly, The Happening is interesting to read in contrast to the subtext of these other apocalyptic films. War of the Worlds and Cloverfield concern themselves with the attempt to reunite with loved ones; I Am Legend seeks hope in sacrifice and religious faith; Diary of the Dead seeks an outlaw heroism in the attempt to tell the unadulterated truth in an era of government spin; The Day the Earth Stood Still urges us to move beyond nationalistic, self-interested thinking to accept global responsibility; The Mist sees that when disaster strikes humanity will be torn apart by superstition and mob behaviour where, even if one does operate by commonsense, there is no guarantee it is the right decision; while 2012 urges us to retain some human decency rather than think only of our own survival.

By contrast, The Happening‘s response is a typically M. Night Shyamalan one – the quest for meaning in seemingly random occurrences and the eventual resorting to a mystical solution. Despite Mark Wahlberg’s teacher and his constant efforts to understand the threat rationally, the theme emphasised by Shyamalan is that science is useless and the universe operates on notions that will forever remain beyond our understanding. With a typical Shyamalan-esque preponderance for mysticism, Mark Wahlberg says: “Science will come up with some reason to put in the books but in the end it’ll just be a theory. We will fail to acknowledge that there are forces at work beyond our understanding.”

In terms of the traditional catastrophe film, what Shyamalan gives us is people running around, fleeing the disaster area … and then nothing happening. There is no big fight back against the menace, no ingenious solutions that allow people to survive, not even a scene where anybody is able to determine what is going on. In fact, the film feels like two promising acts – the introduction of and then escape from the menace – before Shyamalan seems to falter and lose his plot. There is not even any resolution to the film – the plant menace dissipates as quickly as it comes and then the film cuts to some months later where life has returned to a semblance of normality. It is one of the most frustrating non-resolutions to a film that one has seen in some time.