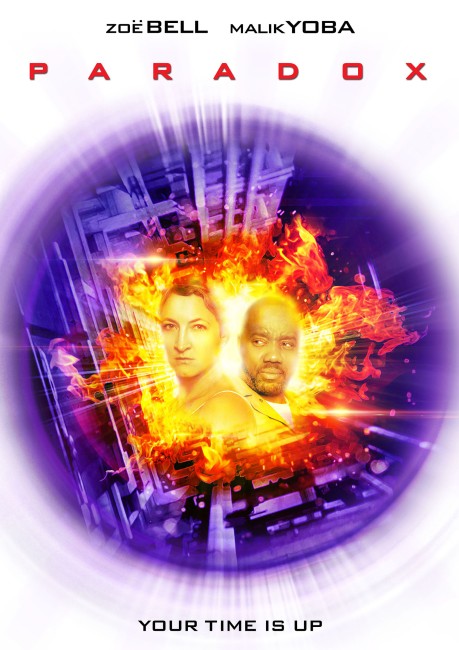 The NSA is monitoring a group of scientists who have been brought together by the mysterious Mr Landau for Project 8-88, the construction of a time machine. Today is the launch date and Landau selects Jim to be the first human subject. Jim is successfully sent through the portal one hour into the future only discover everybody else at the lab has been killed by a mystery person in black riot gear. The dying Lewis gives Jim a camcorder that has a record of everything that happened on it. Jim returns to the present and shows everybody the tape where they try to work out what happened. As it becomes apparent that members of the research group have come from the future, the events on the tape start coming true.

There have been a number of time paradox films before going all the way back to La Jetee (1962), later remade as Twelve Monkeys (1995). The theme has gained some sophistication in recent years with the likes of Timecrimes (2007), The Infinite Man (2014), Predestination (2014), Synchronicity (2015) and Black Hollow Cage (2017). Paradox follows the general path of these in that it is a temporal jigsaw in which we follow the plot along one vector (usually that of one character’s point-of-view) as anomalous happenings are revealed to be people travelling back and forward in time (something we do not understand until the full causal pathway becomes apparent later in the story).

Paradox starts well with the events in the laboratory going from an initial air of experimentation to the massacre of all present within the space of only an hour. There is then the pleasure of watching as all of the pieces of the puzzle start coming true. The characters even have a videotape that tells what is going to happen but the film still manages to produce a number of twists involving travellers from the future, traitors and NSA agents within the group and the killing of multiple characters. It is a jigsaw constructed with some ingenuity. The downside of Paradox is that it is shot on a B-budget and Mike Hurst has a journeyman-like directorial style that keeps the show going but never gives it anything beyond a B-budget film.

The film toplines Zoë Bell, the former stuntwoman who appeared in Quentin Tarantino’s Death Proof (2007) and has since maintained a modest acting career. Bell has cut out a screen presence as a woman who can kick ass alongside the best of the guys. The unfortunate thing about Paradox, which Bell also executive produces, is that it miscasts her in the role of a regular girlfriend for the bulk of the film. Bell has such a tough girl presence that being the stock ‘The Girlfriend’ is not at all suited to her personality, least of all when it comes to some of the ridiculous dialogue she gets comparing her relationship with Adam Huss to Cherry Kool Aid. She does open up and get to be herself near the end but it is far too late in the game.