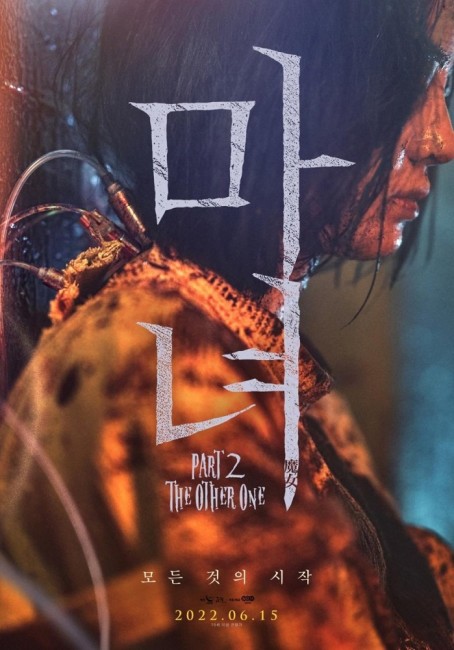 Several years ago, a pregnant teenage girl was abducted from a school bus and taken to a laboratory, while it was made to look that the other schoolchildren in the bus died in an accident. In the present-day, a girl escapes from the laboratory in a bloody massacre. She is found wandering in the woods by Kyung-he who takes her back home to her farm. The girl’s unworldly naiveté is of fascination to Kyung-he’s teenage brother Dae-gil who gets ideas about promoting the girl as a YouTube star. The local gangster Yong-doo comes to threaten Kyung-he but the girl manifests psychic powers and drives Yong-doo and his men away. Meanwhile, hired killers have been despatched to recapture the girl. They, along with killers from a rival Chinese group and Yong-doo’s heavies all converge on the farm.

The Witch: Part 1 – Subversion (2018) was a South Korean venture into psychic powers themes. A directorial effort from Park Hoon-jung, usually known for his gangster and historical films, it proved a reasonable success, while ambitiously announcing that it was the first of the series. The Witch Part 2: The Other One is the sequel, while a third film is also implied in the ending.

The first The Witch film came as part of a rise in films about Psychic Powers that have emerged from South Korean Cinema in the late 2010s/early 2020s. Around the same time, we have also seen Psychokinesis (2018) and Seobok (2021), both of which are fine films. Although by the time that The Other One arrives, these start to blur into a certain sameness – The Witch films and these other two all climax with the empowered hero/heroine of the particular film unleashing a psychic conflagration against the pursuing heavies.

The prologue tells us about the school bus that is diverted, the pupils gassed and one of the students abducted. As later becomes apparent, the teenager is pregnant with twins – one of which will be Kim Da-me from the first film and the other this film’s unnamed heroine Shin Si-ah. Kim Da-me makes a return appearance at the very end and we get to meet their mother with things clearly set up for a third film where presumably all parties will come together.

The Other One is often a confusing watch. I am not sure if this is a result of the subtitles or not – the version I was watching had subtitles for the sections where the hitwoman (Seo Eun-soo) and her South African associate (Justin John Harvey) speak English, where the subtitling was notedly at variance from the words that you could hear being said by the characters. That said, we have a plot that is not so much complicated as it is a fairly simple one but where it is not at all clear who the different parties running around after the girl are –often at times, it feels like we are in the midst of another of Park Hoon-jung’s Korean gangster films rather than a psychic powers film. The hitmen and others display super-powers – they conduct power punches, take massive leaps through the air, display regeneration ability – but there is no explanation of who they are and why they have powers.

Often much of The Other One feels as though it is composed from the clichés of the Psychic Powers genre:- the pursuing heavies (who are usually government agents); the persecuted psychic child/teen/unworldwise innocent with incredible power. The film also recycles the basic plot from the first The Witch – girl escapes from a research facility, seeks refuge on a farm, before everything ends in a psychic conflagration. The last two-thirds of this film feel as though Park Hoon-jung has taken the farmhouse siege scenes from Firestarter (1984) and expanded them to feature-length. There is some amusement in the Outsider scenes with an innocent Shin Si-ah wandering through a supermarket and trying to understand aspects of the everyday world.

Park Hoon-jung delivers some impressive set-pieces with Shin Si-ah battering thugs around and levitating shards of fence post to attack en masse, tossing vehicles across the farmyard, crushing a baseball bat in her hand and the like. There’s a cute sequence with she and Sung Yoo-bin on the roof as she levitates all loose objects around the farmyard up into the air behind him without him noticing. Park brings it all together for an extended super-powered climax with various of the assassins fighting one another and then Shin Si-ah eliminating fairly much everyone around her.