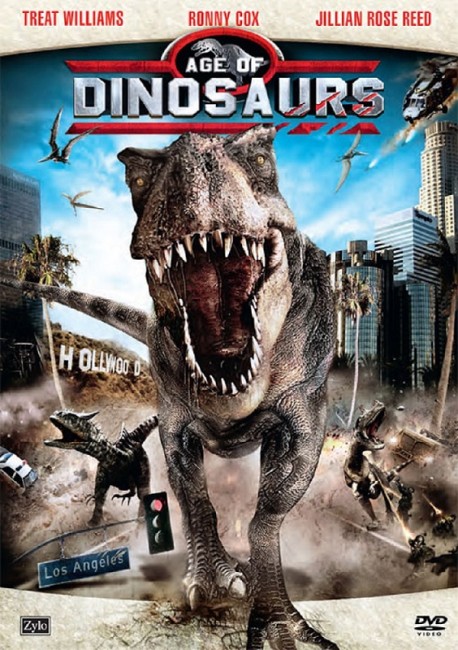 In Los Angeles, Gabe Jacobs is a former firefighter now working security. He takes his teenage daughter Jade with him to attend a demonstration by Justin, the CEO of Geneti-Tech. Justin claims they have discovered miracle regeneration techniques and demonstrates them by getting up out of his wheelchair and walking. He then reveals that they have used the same techniques to recreate dinosaurs. However, things behind the scenes go wrong and the dinosaurs burst free from their cages and start devouring the attendees. With the convention hall under security lockdown, Gabe tries to find a way to escape the building.

The surprise about Age of Dinosaurs is that it is not one of The Asylum’s mockbusters. It was released two years before Jurassic World (2015) came out but that is forever in terms of The Asylum’s mockbuster schedules when their films come out a day or two, at most a week before their namesake counterparts do. The film is however heavily reliant on Jurassic Park (1993) – businessman reveals to the world that he has brought dinosaurs back to life, dinosaurs escape their confines and go amok. The major difference is that Age of Dinosaurs is being made on a B budget and rather than Isla Sonora the dinosaurs’ rampage is contained to a convention centre before they burst out into downtown Los Angeles.

Against the lowered expectations of an Asylum film, Age of Dinosaurs proves halfway reasonable. The effects vary between the passable and the occasionally ropey but are mostly much better than average. Part of the reasons for this is because the film was directed by Joseph J. Lawson who is usually better known as visual effects supervisor for The Asylum, although has taken a director’s role on several occasions with the likes of Nazis at the Center of the Earth (2012), one of The Asylum’s best films, Age of the Hobbits (2012), Alone for Christmas (2013) and Ardennes Fury (2014).

As a result of his background, Lawson stages the dinosaur effects far better than most of the other Asylum directors. He builds the opening up particularly well where wheelchair-ridden CEO Ronny Cox fronts the demonstration and then surprises everybody by getting up out of his wheelchair and walking to prove the formula works, before everything predictably goes pear-shaped and the dinosaurs break loose.

Once the dinosaurs break out, there are some quite good effects with dinosaurs chasing Treat Williams’ SUV through the streets. In particular, there are some excellent shots with the dinosaurs fighting with helicopters in an alleyway, and of the mass destruction scenes showing them climbing the sides of buildings in downtown L.A.