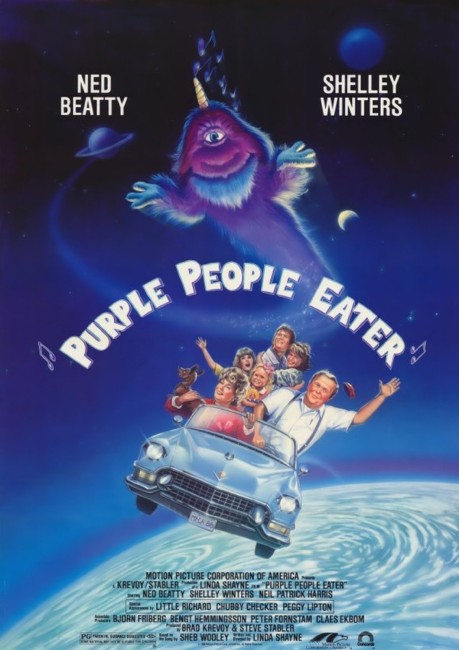 Young Billy Johnson is left in the care of his grandfather while his parents go to Europe on vacation. He discovers some old 45 records and plays the song ‘Purple People Eater’. He sees a UFO come down and out of it emerges a short, single-eyed, purple-furred alien that makes music from a horn on its head. Billy befriends the alien and names it Purple. He and a group of friends then form a band with Purple. Their music is a big hit and they are offered a record deal. When the money-hungry owner threatens the seniors at Billy’s grandfather’s retirement village with eviction, Billy and Purple decide to intervene to save them.

This inane clone of E.T. – The Extra-Terrestrial (1982) sounds like someone had pitched an idea off the top of their head – “Let’s do a movie about the Purple People Eater – we could have a 50s rock’n’roll soundtrack and squeeze in guest appearances from Chubby Checker, Little Richard and Sheb Wooley” – and then had been forced to go away and come up with a movie to go with it.

In every way, Purple People Eater the film manages to disappoint on the initial premise. Okay, the People Eater is purple and is, as in the song, one-eyed; there was the vain hope that one might get to see it eat people but the film cheats on this by pedantically stating that it only eats purple people and this element of potential cannibalism is never dwelt on any further.

We do get a remarkably well preserved Chubby Checker doing the twist with the adolescent band (how the one-hit greats must grit their teeth at what they are forced to do to earn money thirty years later) and an even better preserved Little Richard as the town’s mayor (although how any town would vote such a jive-talking live wire in is a question of considerable credibility). On the other hand, original songwriter Sheb Wooley makes no distinction at all as a grizzled trapeze trainer. Even more disappointing is the soundtrack – one never even gets the original song over the credits, for instance.

With such a premise, Purple People Eater could have been made into a pleasantly enjoyable 1950s rock’n’roll/science-fiction combine – maybe something like Earth Girls Are Easy (1989) – but instead the filmmakers chose to make it as an E.T. copy. However, Purple People Eater is not even good at doing that. The alien creatures in these films are meant to be cute but this one is cute to such an absurd extreme – with its luxuriantly purple coat, its single oversized eye, its horn that spouts animated musical notes, and in the way it wiggles its butt, boogies and makes cute whimpering noises – that it is impossible to conceive how such a ridiculous creature might exist as a credible lifeform.

It is hard to imagine what possible appeal the filmmakers might have thought anyone would find in the adventures of a group of twelve year-olds forming a band (certainly not anyone who is likely to come to the film from an interest in 1950s rock’n’roll). The band sequences are not even convincing – when Neil Patrick Harris lip-synchs to the songs, it is laughably evident that it is an adult not a twelve year-old who is singing. The rest of the film is played with an irritatingly juvenile tone – some sequences like where Purple causes chaos in a fast-food restaurant with its psychokinetic burps or the slapstick car chase with Purple behind the wheel, are incredibly awful.

Director Linda Shayne made a number of other minor children’s films during this era with the genre likes of The Undercover Kid (1996) about a kid that talks to animals, Little Ghost (1997) and Flyin’ Ryan (2003) about a kid with flying sneakers.