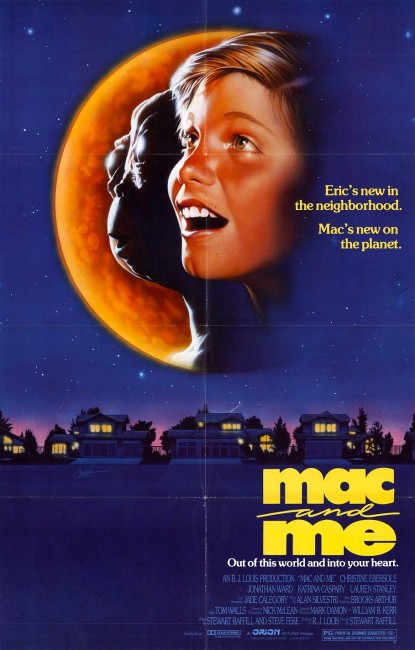 A NASA probe lands on an alien planet. While taking soil samples, it accidentally sucks up a family of aliens. On Earth, the aliens flee in the resulting confusion. Separated during their flight, the baby of the family hides in the van of Janet Cruise and her two sons as they make their way to a new home in Sacramento. There the baby alien comes to befriend the youngest wheelchair-ridden son Eric.

Mac and Me is a blatant copy of E.T. – The Extra-Terrestrial (1982). It is shamelessly derivative and copies E.T. wholly by the numbers – sinister scientists attempting to capture the aliens, chases across suburban avenues and a fake death scene where we are led to believe the alien has died.

However, when it comes to the inevitable panderings to junk culture Americana that Mac and Me hits an offensive low – containing what is essentially an extended commercial break for MacDonald’s (with breakdancing no less!!!), not to mention the hefty plugs for Coke (which is capable of restoring life to the aliens!!!). The trailer – see below – even comes supposedly introduced by Ronald McDonald. There is even a plug at the end for its own yet-to-emerge sequel – “We’ll be back.”

The aliens must count as the dopiest looking ET’s ever designed for a science-fiction film. There is a nauseating ending where the aliens all take the pledge of allegiance to become American citizens. As the youthful male lead, Jade Calegory gives an extremely annoying non-acting performance.

Mac and Me was directed by Stewart Raffill, who has made a number of genre films down the low end of the market with the likes of The Ice Pirates (1984), Mannequin on the Move (1991), Tammy and the T-Rex (1994), Croc (2007), Bad Girl Island/Sirens of the Caribbean (2007), and one halfway good film The Philadelphia Experiment (1984). Mac and Me is occasionally well directed – the scenes with the ET’s communicating across the desert by a peculiar whistle is momentarily a poignant one.

Mac and Me also features special effects from John Dykstra. A decade earlier, Dykstra had led an entire special effects revolution as the photographic effects supervisor on Star Wars (1977). Due to some poor choices of material, Dykstra’s career quickly plummeted until he was forced to churn out junk like this.