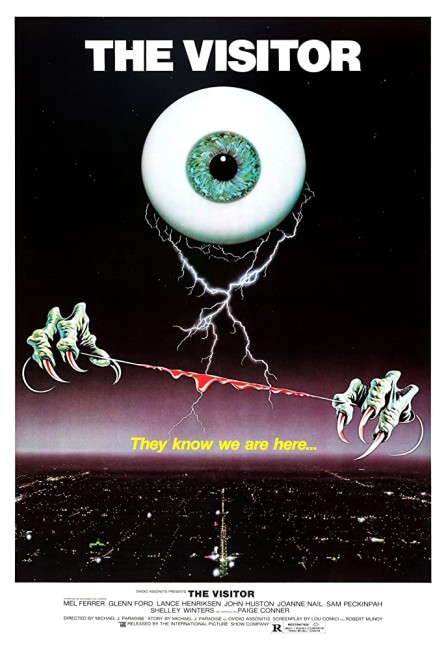 Satan, the intergalactic dictator, has succeeded in fathering a child on Earth to Barbara Collins, a genetically perfect woman. The resulting ten-year-old girl Katie has amazing powers. Satan’s board of directors on Earth explain to Barbara’s lover Raymond that he must marry her and father a similar boy. However, when Barbara refuses him, Satan’s minions arrange that she be abducted by a UFO and artificially inseminated.

Italian exploitation cinema is like no other in its shameless and cheerfully unconcerned willingness to regurgitate popular American successes. During the 1970s, Italy was extremely prolific in their replication of occult films such as Rosemary’s Baby (1968), The Exorcist (1973) and The Omen (1976).

Amongst these, The Visitor is one of the most bizarre crosshatches. It is like something that started as a potpourri of the cliches of the occult cycle – Satanic impregnation (Rosemary’s Baby), the foul-talking adolescent Devil girl (The Exorcist), conspiring cabals (The Omen) and so on. It is as almost though during the making of the film Close Encounters of the Third Kind (1977) came out and the filmmakers suddenly decided to jump ship as to the type of film they were making, resulting in this eccentric crosshatch between a Devil child/Satanic impregnation film and a UFO film.

The results are bizarrely incoherent to say the least. What makes The Visitor halfway watchable is its often surreally striking but totally non-sequitir imagery – Glenn Ford gets attacked by an overgrown clay pigeon; John Huston, who presides over an intergalactic group of bald-headed children, spends the film on top of a building amid flashing blue landing lights; Linda Blair-like Paige Conner spends the film wearing oversized sunglasses and removes them to reveal gleaming metallic eyes underneath – and in the opening few minutes psychically blows up the ball at a basketball game; and in a wonderful parroting of the Close Encounters highway scene, Joanne Nail gets kidnapped by a UFO and artificially inseminated and is later shoved through a glass fish tank. Much pseudo-mystical twaddle is bandied, absolutely nothing makes sense.

Director Jules Paradise (Giulio Paradisio) has assembled an amazing cast of American marquee names – including the likes of John Huston, Shelley Winters, Mel Ferrer, Sam Peckinpah, Glenn Ford and Franco Nero, as well as a young Lance Henriksen. All seem to wander through the film clearly having little idea what they are supposed to be doing and no doubt looking for the paycheck they must have direly needed.