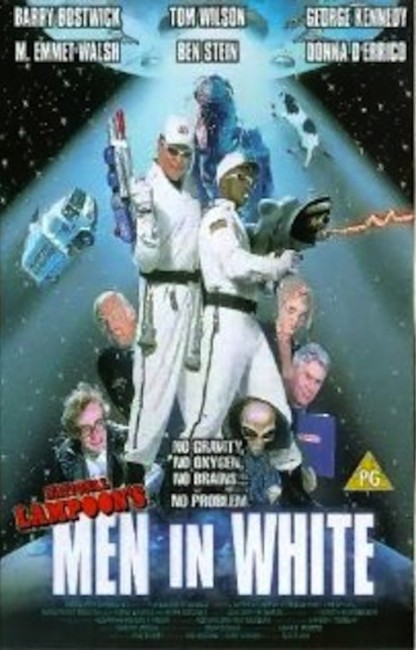 Two dim-witted garbage collectors Fred Klingbottom and Roy Du Bro are abducted by aliens in a UFO but manage to affect an escape. With the country plagued by alien abductions, The President demands that security agencies do something. Fred and Roy are recruited as agents and sent into action in a hi-tech garbage truck. However, the invading aliens are being aided by the President’s adviser Dr Strangemeister who is determined to sabotage efforts and place the blame on Fred and Roy.

Amid these host of National Lampoon films, it would have to be agreed that Men in White is the most excruciating of them all. National Lampoon’s Men in White was made after the big box-office success enjoyed by Independence Day (1996) and Men in Black (1997) and was construed as a parody of the genre along the lines of Airplane (1980) and The Naked Gun: From the Files of Police Squad (1988). It has been a long time since one has seen such an agonizingly unfunny comedy. It is painful to watch some of the eye rolling that goes on between the two principals or the sheer moronicism of the sped-up scenes of them running around with a suction pipe.

There are a great many movie pastiches throughout from Rocky (1976) to the “Are you feeling lucky punk?” speech from Dirty Harry (1971) to more science-fictional targets like 2001: A Space Odyssey (1968) – here the monolith is a domino and the Blue Danube sequence makes people sick. There are a bunch of aliens who all spout smartass colloquialisms in squawky voices. There are lame lines: “Extra-terrestrials? No thanks, two terrestrials is enough for one man.” The UFOs have bumper stickers like ‘If You Can Read This You’re in Space’ and ‘I’d Rather Be Abducting’. The digital effects representing the UFOs and aliens are poor. Men in White comes with a level of inanity that is persistently in your face in a way that becomes exhausting by the end of the show.

National Lampoon’s Men in White was made by Saban Entertainment, a children’s entertainment production company, responsible for tv series like Samurai Pizza Cat (1991), Mighty Morphin Power Rangers (1993-6), Digimon (1999-2003) and various video-released features such as Addams Family Reunion (1998), Richie Rich’s Christmas Wish (1998) and a host of Casper the Friendly Ghost sequels. Director Scott [P.] Levy is a former Roger Corman protégé who has directed a number of B genre films including Midnight Tease (1994), The Alien Within (1995), Piranha (1995), House of the Damned (1996), Time Under Fire (1997) and Error in Judgement (1998). Men in White was such a disaster that Levy has yet to direct another film.